The Jayhawks’ starting quarterback in their season opener, Thomas MacVittie, had his last name misspelled on the back of his jersey Saturday night versus Coastal Carolina.

Perhaps the “MacVitte” on his shoulders was an omen that the Kansas football team would run into some issues at QB.

A 6-foot-5 senior, MacVittie started for the Jayhawks, but head coach Les Miles stuck to his plan of playing Miles Kendrick, too, in what would become a 38-23 home loss at David Booth Kansas Memorial Stadium.

MacVittie’s night ended prematurely in the third quarter, when he appeared to suffer a shoulder injury and returned to the locker room. 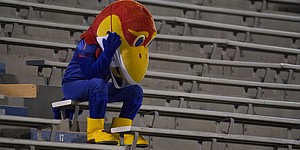 With his evening cut short, MacVittie finished 5-for-9 passing, with only 20 yards on his stat line and an interception — receiver Lawrence Arnold got his hands on an early MacVittie pass but when he didn’t bring it in CCU picked the ball out of the air.

A 5-foot-10 junior, Kendrick threw a first-half interception, as well, and ended up completing 15 of 24 throws for 156 yards, with a pair of second-half touchdowns — one to Andrew Parchment on 4th down after MacVittie got hurt and another later to Kwamie Lassiter II.

Asked late Saturday night during his postgame video press conference to assess KU’s QB play, the Jayhawks’ head coach pointed to the turnovers as the issue.

“We as a team, coaching staff first, will do the things necessary to correct and fix,” Miles said. “And I feel pretty good about it.”

Miles didn’t have an update on MacVittie’s status after the loss, nor did he care to address how KU will handle its QB situation moving forward, with the Jayhawks off next Saturday.

“We played three quarterbacks and three quarterbacks that really in my opinion are gonna make a significant future for us at that position,” Miles said, even including freshman Jalon Daniels, who played the final series of the loss, in his discussion on the QBs. “It’s not just the quarterbacks, it’s the room, it’s the coaches. We’ll all work on it. We’ll all stick our head in the fire to make sure this style of play does not become ours.”

MacVittie was not made available for an interview after the loss, but Kendrick was and said the two found out during the game week preparation for Coastal that they would both be playing. 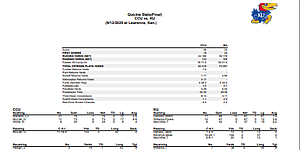 According to Kendrick there was no discussion of which direction the QB competition was headed in the aftermath of the opener.

“Nah, I think we were more focused on tonight’s game,” Kendrick said, “and what went on tonight and how we can move forward.”

Kendrick’s first throw of the second half was a 14-yard TD to Parchment on 4th and 5. He would complete five more passes in a row after that and went 8-for-13 through the air in the second half, for 95 yards. He put a 37-yard bomb to Lassiter on the money when he was in a groove.

If playing QB without having to rotate in and out of the game in the second half helped Kendrick he kept that to himself.

A true freshman, Daniels came in with the game all but over and made his KU debut. Daniels went 1-for-2 with a 13-yard connection to Arnold.

Not too long after KU lost MacVittie to injury, star running back Pooka Williams left the game, too, for the same reason.

Asked what happened to Williams, Miles replied, “playing football.” KU’s coach didn’t say what part of Williams’ body got hurt in the second half.

“Pooka’s got a nick and I suspect he’ll be back relatively quickly,” Miles said.

Williams finished his junior year opener with 12 carries for 67 yards and wasn’t used as a passing target.

Sophomore Velton Gardner sprinted to a 61-yard touchdown late in the third quarter and finished with 81 yards on 11 carries.

There would be some consolation in yesterdays loss if one of the quarterbacks had emerged as the clear cut starter.

Based on what I observed (in the first game), I'd be for Miles Kendrick starting as QB.

His QB escaping abilities to buy time (as the OL struggles to contain the opponents defensive units) looked effective (in the 2nd half).

Kendrick Miles made some pinpoint passes (in defensive traffic) to continue moving the ball down the field. I realize that Big XII Defensive Backfields should present potentially more challenging obstacles. But, Miles made the necessary adjustments (against Coastal Carolina) that presented (to me at least) some hope of the team getting back into the game. The on-side kick was genius and worked (other than the Sun Belt Conference Officiating crew making a horrible call). If that call had NOT been made, it would've been interesting to see how the Jayhakws would've finished off the game.

The Coastal Caronlina RS Freshman QB did a great job of making plays in the 1st half and 4th quarter of the game. Coastal Carolina Defensive Unit was motivated and prepared for the game.

And you have a symbol of KU Football over the last 12 years. "You have one job"!

My one positive take in the game is that we "won" the second half in the sense that we outscored them. Obviously, turnovers gutted our chances but I also think that we were expecting and were preparing for one of their two returning QB starters from last season. Instead, they played a true freshman QB the entire game. I have to wonder how this game would have gone for us had Jalon Daniels played the entire game. We may still have lost but the experience would have been really good for him and we'd know whether he's the QB we want to move forward with now, rather than later. But, then, assuming we would have lost even with Daniels, people here would be condemning Miles and Dearmon for going with a freshman.

Just found out McCall is a redshirt freshman, not a true freshman.

Competition for what? Who can sit on the bench longer?

Unless By some major miracle one of freshman or redshirt freshman QBs is a gamer the direction of the position is the sewer and a winless season.

It’s easy to point fingers at the QB but do we track, ever report on the number of drops?

The real biggie though is at least holding our own on the lines. We were dominated in the trenches. Aren’t many teams that will win if the big uglies are losing.

I'm coach Miles biggest fan but our team was not ready to play. Sad. Now its time for Dearmon to quit screwing around and develop one long-term QB and Kendrick and McVittie aint it. You recruited Locklin to play QB. He has the size and ability. Now develop him and give him some confidence and courage and we will win some games this season. Even some we aren't supposed to win.

Felt like we were outplayed on LOS. Thought Kendrick looked much more comfortable than MacVittie.
There was some visible improvement in QB play as the year went on last year. Might happen again.
KU with a new OL and QB needed Spring Football more than a team who is returning the key personnel at those positions.
Keep the faith baby. We are young. Don't even know what the fight is all about yet, let alone know how to fight it.
Get a little better each year.
As for me, it is clear we need to go with Kendrick as the starter and give Daniels a quarter each game until he proves he does not deserve it.

So the name being misspelled...is that on Adidas? Or someone in the equipment room?

Softest team in America every year. Never aggressive on offense or defense.
Never.

This teams mind set is not where it needs to be.

If getting better and developing a competitive program is what Les and his players desire, then you have no pocket change to be distracted by anything going on socially or politically.

We don't have the talent to be anywhere else other than focusing on the details they can control toward becoming better. I don't believe that's where they are at, which is Les's fault.

The real issue is we have no QB. At least not yet. We also didn't seem remotely prepared for the game. At all.

So apparently, it really doesn't matter WHO is coaching at KU, lack of preparedness is part of the package.