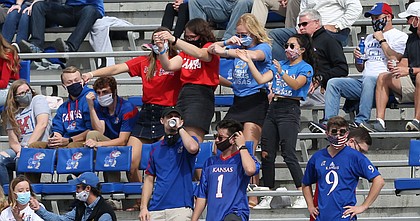 The jokes surfaced as soon as the University of Kansas athletic department announced that it would allow fans in the stands for Saturday’s home football game against Oklahoma State.

“Will that count as a sellout for the Jayhawks,” some asked.

“Do they ever even get 10,000 fans for regular games,” others wondered.

With seats at a premium and David Booth Kansas Memorial Stadium dressed and ready for its first game with fans in the COVID-19 era, a little more than half as many fans as were allowed showed up for Saturday’s 47-7 loss to the 17th-ranked Cowboys. At least half of those who did left at halftime with Kansas trailing 31-0. 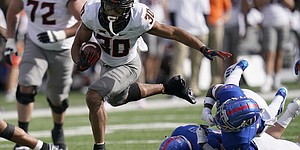 The official attendance at Saturday’s game was listed at 9,480.

According to a KU spokesperson, that was based on the number of tickets distributed to be in compliance with Douglas County’s social distancing guidelines. It also was much larger than the number of fans that actually showed up.

The small, socially distanced groupings of blue seat-back cushions made it easier than ever to see who was and who wasn’t willing to watch the Jayhawks fall to 0-3 on the season.

The question now begs how many are going to show up the rest of the way?

They came wearing jerseys and masks, presumably with smiles underneath them. It was a gorgeous fall afternoon. And even with the absence of tailgating and all of the other festivities that make KU’s pregame atmosphere worth stomaching what routinely happens inside the stadium, it seemed like a great day for football.

“I think any reasonable person would have some concerns,” said Jeff Rank, a season ticket holder from Elkhart, Ind., who made the 10-hour drive to watch the Jayhawks. “But I felt comfortable coming back. I like the fact that they’re taking some precautions and the level of precautions made us feel comfortable.”

“I was always coming,” added KU freshman Rayce Robins, who watched KU’s home opener from Campanile hill by himself. “I’m a huge fan. It’s rock chalk all the time for me. I just love KU football.”

What Rank, Robins and others like them saw on Saturday, though, was arguably as bad as it’s ever been at the base of the hill. 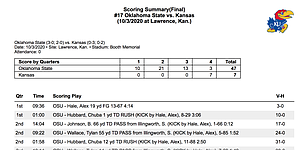 Most of the fans I talked to before the game began said they were thrilled to be back and would not have missed it for anything. Good for them. That’s how you’re supposed to support your team.

“We’re glad they’re playing and we’re happy to be back watching,” said season ticket holders Dennis and Denise, who declined to give their last name and made the drive over from Kansas City, Kan.

But I’m guessing those same fans, and countless others, would be equally as thrilled — if not more so — if KU officials announced today that they would not be allowed back for the rest of the season. At least then they wouldn’t have to decide whether they wanted to spend their Saturdays this way.

Forget the fact that the Jayhawks were overmatched from start to finish. There’s no real shame in that. After all, Oklahoma State was picked by some pundits to earn a spot in the College Football Playoff this season. And the Cowboys have won eight or more games 10 times since KU’s last winning season.

Beyond that, KU was without a couple of starters in the secondary, which certainly showed.

After the game, deflated Kansas coach Les Miles called it “so painful” to watch the Kansas offense gain fewer than 3 yards per play when the defense desperately needed some help.

Coaches, including Miles, often talk about playing complementary football, and the Jayhawks have yet to find a way to do that this season. Never was that more clear than after three quarters on Saturday, when KU had given up 508 yards of offense and gained just 83.

The final yardage differential was slightly better, but not much. And it did nothing to erase the reality of those first three quarters.

Had it not been for the halftime unveiling of two statues to honor KU greats John Hadl and Gale Sayers, Saturday would have been a total loss.

Instead, it just goes down as another loss in a long line of forgettable games in front of a diminishing fan base.

They may have been glad to get in again. But that feeling probably did not last.

A pretty honest article. The KUAD must take responsibility for the diminishing fan base. A decade of mismanagement has damaged the program and the university.

Well, the KUAD has changed leadership 3 times now (since the firing of Mangino).

So, I would place more blame on the Alumni Association and Chancellor of the University for the failures of the Football program.

I have said the same thing multiple times since the firing of Mangino.

The Powers that be do NOT display the desires to have a successful Football program.

NO Head Coach is hired to be the player's "Best Friend". They're supposed to be hired to build a team by teaching leadership qualities and team development.

After the player's have moved on and become productive citizens, that's where the FRIENDSHIPS development begins. Because, the players will then understand and APPRECIATE the lessons their respective coaches were trying to develop.

Firing Mangino told those un-accepting players, that Mangino program didn't matter. And, the Coaching Ranks have seen year after year after year that Football @ Kansas is an AFTERTHOUGHT.

A place where Coaches go to PAD their retirement plans.

Kansas had their chance to have their program builder with Coach Mason. When he seen K-State investing in Coach Snyder and his program. Coach Mason asked for the same. He was denied.

Hire coaches and PAY them to COACH the TRENCH players. That's where FOOTBALL games are WON. If Pooka and Velton have NO gaps to run into, they can't always get outside and around the corners.

Michael may not be far off.<br><br>
<br><br> Firing Mangino instead of supporting him was a HUGE MISTAKE! You can't just fire someone beacuse they are fat and you don't like him. Firing has its consequences!<br<br>
But even worse is to continue the pattern. I would hope that the KUAD go out his way to keep the Chancelor and Alumni out of the coaches office and off his back. And I would hope that they recognize that you have to build discipline and toughness. It's coaches way or the highway.<br><br>
That being said, our OL stinks. Our Defense stinks, and MacVittle and MIles have played poorly. Maybe we should just start the Sophomores and Freshmen and just move on to developing for two years from now.

Kind of like what former Baylor HC Matt Rhule did after replacing Art Briles?

Rhule won 1 game his 1st season (yep we know who that team was).

By the time Rhule departed, his 2019 Baylor team finished 11-3. And, Coach Rhule was the Big XII Coach of the year and finished his Baylor 3 year career with a record of 19-20.

And, look westward down I-70 past Topeka, in the Little Apple, the Cats system keeps on winning.

So much for the “Beaty was a good recruiter”, right?

My concern is simple: we look worse than we did last year. And don’t bother with the excuses that we don’t have Stanley back. Every team graduates valuable players. Improving teams can absorb those losses and still take steps forward. We don’t look improved in a single facet of the game.

If you look at our last three hires, none came with a staff. This means two or three years of sorting out your staff while trying to build a program. Dumb athletic departments do dumb things, over and over and over again. Three coaches. Three all new staffs. Three completely different offensive philosophies. Between Beaty’s and Miles we’ve had five different offensive coordinators. Hell, Beaty couldn’t even settle on a coordinator to run his own preferred offense.

The wheels are off this season. Miles must hold onto the recruiting class. If he doesn’t hold onto it through December signing, his era will be a failure. It really all comes down to that.

The Hawks are in a deep hole but need to just keep working and trying.