Clemence, a 6-foot-10, 205-pound athletic forward from Sunrise Christian Academy in Bel Aire, announced the news in an interview with Evan Daniels of 247Sports. He becomes the first player in the 2021 class to commit to Kansas.

A four-star prospect, ranked No. 31 overall in the class by both 247Sports and Rivals.com, Clemence’s path to Kansas seemed predestined.

“My mom has always just loved Kansas and college basketball, so I just kind of grew up around it,” Clemence told the Journal-World in a Monday morning phone interview. “I guess you could say she kind of brainwashed me to like KU.”

After receiving a scholarship offer from Kansas before his junior season, Clemence spent a little time sorting out his options and looking at other schools. But throughout the process, he never could get KU out of his mind.

That led him to Monday, when he decided to make his commitment official on a Zoom call with his mother, Kansas coach Bill Self and assistant coach Norm Roberts, who was the lead recruiter for Clemence.

“I’ve been thinking about doing it for the last month or so,” Clemence said. “I’ve just got a great relationship with the coaches and the coaching staff there and I figured, why wait on something that you know is going to be great for you.”

Originally from Pleasanton, Texas, a town of 11,000 people that dubs itself as “the birthplace of the cowboy,” Clemence grew up on a ranch about an hour outside of San Antonio and transferred to Sunrise last season. 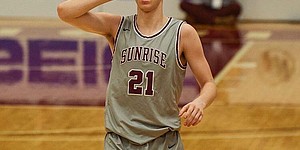 He said he has yet to make an official visit to KU’s campus, but was in Lawrence for Late Night last season and has been to a handful of KU games. Asked if any of them were particularly memorable, Clemence laughed and said, “All of them.”

“I think I’ve been going to KU for like six years, unofficials, games, all that,” he said. “They’re all great. The fan base, the atmosphere, I don’t think there’s anything like it.”

Known as a versatile big man who can play three positions, Clemence said he favors the role of the stretch 4 because it puts him in the best position to capitalize on his wide range of skills.

“You get to do it all,” he said. “The 4, in my opinion, is the best position in the game. You can do literally everything from that spot.”

Asked to pinpoint his strengths, Clemence, who compares favorably in size and style of play to Duke sophomore Matthew Hurt, said shooting and athleticism were the most important parts of his game.

Scouts say he also has good hops and is comfortable around the rim.

"(Clemence) can really shoot the ball from deep, but is also very mobile, runs the floor and is adding the strength necessary to be a force on the glass," wrote Rivals' Eric Bossi.

As for what he is working to improve the most during the summer and his senior season before coming to KU, Clemence pointed to his ball handling.

“I really want to work on my guard skills,” he said. “I move way different than most 6-10 bigs, but, really, I want to keep working on everything in my game. You can always get better.”

“I figured it was a good Mother’s Day gift,” he joked of why he chose to make his decision official on Monday morning. “But, really, I just wanted to go where I feel most comfortable and be able to have fun my senior year and go represent.”

6-10 outside shooter. that is cool--don't recall too many 4's at KU that play outside.

Kind of the reverse of how we used Svi, a guard who learned to play the 4 so well, he beat Duke.

Great news. Congratulations to everyone involved. I love bigs that can shoot the ball (really any position that can shoot it, but especially big men). Looking forward to seeing him in action.

Very Villanovaesque. Big Men who can move outside and inside, is a winning attribute.
Good to get some good news about BBall program, I wonder how much Adidas had to pay him? Not.!!!

Rae - Perry was probably one of the few, though really only the last year or two. He had been too comfortable for his ultimate BB good with his old man low post game.

realistically it has only been significant in college ball for a few years. Nova really pressed the issue when all 5 could shoot from outside during their last NC. Before that it was mostly bigger guards, like Wiggins, Jackson, and even Svi or Garrett that would fill the spot. Even more so for most schools where bigs are a premium.

Sounds like a solid commitment (from Sunrise Christian Academy attendee) who will be teammates with another Jayhawk target as well.

This kid reminds me of a right handed Raef Lafrentz . Good get if he holds .

great! another mitch lightfoot. been there and done that. we need an upgrade. he's dominate vs ksu, but that's about it.

this kid is ranked #31 in his class. There's probably only a handful at most of PFs higher ranked than him in the Sr. class. This kid appears to have the size, skill, and athleticism to be in the NBA after a strong 2 or 3 years at KU.

Let's hope that he sticks to his commitment after the NCAA decides to dole out discipline.

I like it, I like the player, his skills and strengths, and its Coach Self flipping the finger at the NCAA again with another local kid. By the time they try and make their case, the roster will be almost totally local from KC and Wichita. I didnt hear D as one of his strengths but sounds like his all around game persona should lend itself to team first D effort. Good Get and Welcome to the Jayhawk Family.

I like Prison Mitch, but it’s good to clarify the distinction with Zach, who is 2” taller, 70 places higher (31 vs. 107), and already has a better outside shot and ball handling skills.

To put it more positively.

RJ - He got the extra naming a couple years ago after putting in a lot of work to get stronger. I think it really came in an article about the work Hudy had done to get all of the guys stronger. There was a team photo in workout garb with a sleeveless Mitch in front. His arms were crossed over his chest accentuating his gun show. I don’t recall who coined the phrase/name. It is fun (IMO) to recognize the work he’s put in to develop over the years. No longer the skinny white kid getting pushed around inside.