After a hard charge to claim the Big 12’s regular-season crown, the Kansas Jayhawks enter the postseason in position to be picky about their approach.

As the No. 1 seed in this week’s Big 12 Tournament in Kansas City, Mo., top-ranked Kansas will play at 1:30 p.m. Thursday against the winner of the 8-9 game between Oklahoma State and Iowa State.

What they do before and after that, however, is still up in the air.

“It’s not a win-at-all-costs tournament,” Kansas coach Bill Self said Saturday after the Jayhawks’ 66-62 win at Texas Tech. “Even though if you play you’ve got to win, but I’m not going to go into it thinking that we’ve got to grind to win this one. Let’s play and hopefully get some guys a chance to play.” 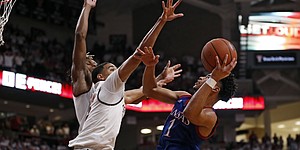 No. 1 Kansas at Texas Tech

No. 1 Kansas at Texas Tech

Doing that, with reserves like Silvio De Sousa, Tristan Enaruna and David McCormack, potentially could give some key starters a chance to rest.

KU’s three-headed monster of Udoka Azubuike (ankle), Devon Dotson (hip and ankle) and Marcus Garrett (foot) all have been playing through minor injuries during the past couple of weeks. And while each has been able to push past the pain and discomfort of their ailments, Self said Saturday that he would love to give them as much time as possible to heal up heading into the NCAA Tournament, which likely will open March 20 in Omaha, Neb.

“If we played each one of those guys 30 minutes, it would be like us not even playing them because they’re used to playing 35-37,” Self said of Azubuike, Dotson and Garrett. “So it would be nice to be able to do that.”

Of the three, Garrett’s injury appears to be the most bothersome.

Azubuike has played well in two games since injuring his ankle — including a dominant career-high 31 points and 14 rebounds on senior night against TCU — and Dotson also appeared to be back to full speed on both ends of the floor during KU’s sprint to the Big 12 title.

Garrett, however, continues to show some signs of his injured foot bothering him. Pain in his arch is how Self previously described it. But despite the occasional limping and wincing during timeouts and dead balls, Garrett has not let the injury impact him during live action.

Beyond that, Self said Saturday that the injury is not something that Garrett can make worse by playing on it. It’s simply a matter of managing and fighting through the pain.

“Basically,” Self said. “But what helps is time off. With Marcus, hopefully he can practice by Tuesday at least a little bit. But if he can’t, we’ll sit him. We’ll sit him and save him for the tournament. But he’s not going to want to do that.”

Game flow and the play and production of the players behind those three will go a long way toward determining how much rest KU’s top trio can get this week. But Self said Saturday that he would do everything he could to rest them before the Big 12 tourney gets going and that he would shut any of them down altogether if the nagging injuries required it.

“I may give them Sunday and Monday off this week and practice Tuesday, Wednesday light,” Self said Saturday. “But I don’t know how we’re going to approach it. I don’t have a game plan yet.”

What he does know is that when the Jayhawks step onto the Sprint Center court, regardless of who’s playing or how many minutes, the objective will be the same as it always is.

“We’ll definitely try to win Thursday,” Self said. “And then we’ll play and see Friday. If anybody gets nicked up, I wouldn’t think I’d push that at all.”

Added freshman guard Christian Braun, who also could see an increase in minutes even though he has been playing in the 20s in recent weeks: “You’re not going to go into any game thinking it’s OK to lose.”

That mindset, along with the competitive nature of each of the Jayhawks, helped Kansas roll through the regular season with a 28-3 overall record and a 17-1 mark in Big 12 play. That’s the most Big 12 wins by a team in the history of the conference, and the Jayhawks’ drive and determination helped them rip off 16 consecutive victories after falling to Baylor at home on Jan. 11.

Because of their desire to keep a good thing going, don’t expect the Jayhawks to change their approach in the days and weeks ahead.

“It was just do what we do,” Dotson said after Saturday’s win. “Like Coach said before the game, just do what we do. No matter the standings, at the end of the day we’re playing basketball and we’re going to try to win every game.

“It’s win or go home from here on out. I know all of us are locked in in that locker room, no distractions, and we’re looking to do something special coming up.”

As a Kansas fan/alum, I LOATHE this tournament. It's a huge distraction and waste of energy getting ready for the NCAAT. Kansas has absolutely nothing to gain....everything to lose playing these tournament. Regardless, it is a ton of fun and I enjoy seeing all of Ames, IA show up. More important, I'm hoping KU goes south taking the Omaha/Houston road to Atlanta.

What the hell is the matter with you??? I'd rather that those Cry-Clown fans stay home and stop turning Sprint Center into Hilton Coliseum South!

I always enjoyed attending the Tournament when I could. It started getting too pricey to attend and I had better beer, seat, and view from my sofa/big screen. So I will go for anything that extends the season a few more games. It's going to be 7 months without any games. Stock up the memories!

Isn't it St. Louis to Houston in the South regional?

1] Having won the Big 12 regular season title [which is the one that counts in my opinion], winning the Tourney takes on a lesser priority than being 100% for the NCAA.

2] Simplest solution, win the first game, lose the second in a close match then get almost a week to rest up and get everybody healed.

4] Definitely Houston..KU fans will show up any where and a Houston pick would force Baylor elsewhere.

5] Next season's team looks to be pretty damn good with Big Mac, Mitch, Ochai, Silvio [yes, Silvio], Christian, Tristan, Marcus, Jalen and whomever else they can recruit.

6] MVP?????? As great as Dok has been, this team doesn't go anywhere without the little engine that could.....Devon.

5] People keep writing about Silvio leaving, I agree, he'll be playing for KU next season. For starters, this is where He wanted to play, not where his "guardian" had him lined up. Secondly, he really came through in crunch time that freshman year, moreover, Coach likes him, he's never said anything derogatory about Silvio. Thirdly, he'll be a senior, a senior with less than a season of playing time under his belt, but he has practiced with the team for three years already, where's he going to go? I don't see him wanting to leave and I don't see Coach encouraging him to do so. He's not like some of the others that have come and gone, really, other than the KSU malay, where he has taken the brunt of the punishment, the issues surrounding him have not been of his doing.

Laugh all you want, but I still don't think we play as a team yet. At least we're still winning right? I still don't see kids picking up their teammates falling on the ground chasing loose ball or getting hammered. Not as spontaneous as other teams have shown. Maybe it's coach's strategy, but I still see a lot could've been done differently when kids going all the way to the basket, failed to score.
If we are to play as a team, brotherhood/camaraderie is a must - if that feeling is not there, we're going to fall before even reach the FF. Trust me.

I mean that respectfully.

There's just no pleasing some people.

Coach knows that it’s good for the conference and KU for Baylor to do well. I could see him choosing to go north if it meant that BU would also be better positioned. Not it was to our detriment but as long as it doesn’t hurt us, yes.

Dot is amazing and in the most important position but it seems to me that the coaches recognize how thoroughly they have to game plan against Dok and he (and Coach) learned to adapt and dominate anyway.

Suzi - As nice as it would be to completely rest the 3, we don’t have enough players.

We may not be able to completely rest the big 3, but they should't be playing more than 20 minutes each at the most. It's such a huge risk of injury, with nothing to be gained. We're going to be the overall number 1 seed no matter what happens in the Big XII tourney.

Translation: It's unlikely anybody gets substantial rest.

On one hand, anyone involved in basketball at this level is an intense competitor and never, never plays to lose. On the other, Self has made it abundantly clear over the years that he hates this tournament (so do I). This team is used to playing 2 games a week. I wouldn't want to give them too much rest, because it could throw off their rhythm.

Because it's functionally home games for us in the Big 12 Tournament, sure it'd be nice to win.

I'd probably feel differently if we TIED Baylor and could win the Big 12 "OT" style.

If we can win our first game, I'd almost sit the main guys the entire 2nd halfs of the remaining games.

Problem is, Self is so competitive, I could see him putting guys back in to make sure we win.

Any KU basketball game is a good one to have.

This is a true rarity in which, we could lose the first game and still be the number 1 overall seed for the NCAAs.

I think they might dangle Indianapolis or Houston over our heads or Omaha or St Louis...either way KU will travel so, I'm not sure which one is best.

Last year and this year, the difference was that the team learned to win on the road. Road teams in my perceived bias helps during the tourney. I feel that this year we have a good lineup for a great run.

I'm sure one or more of these will end up as a two, but last week this was the consensus.

Kansas, Baylor, Gonzaga, Dayton. All but Kansas seems like a 3 line.

If you saw those lines, which one would you say is the 1 line and which one the 3 line.

Should be an exciting tourney.

I know the guys could use a break, I also know Coach likes to win, what I'm curious about are the ethical questions surrounding not putting your best team on the floor? We all know betting will be involved in who will be the Big XII tournament champion, with money on the game is it ethical not to try to win by resting your better players? By Coach saying he "could" rest some guys, is that signaling that you should be careful where you put your money? I don't bet, winning bets takes luck, a commodity I've always been short on, so I just wonder what your opinions are.

One thing to consider... the St. Louis/Houston route gives us an extra 2 days rest in preparation for the sweet 16 games!