Before the first media timeout of the second half, No. 1 Kansas became the outright Big 12 champion. The rest of it was just gravy.

With Baylor suffering a 76-64 road loss to West Virginia, the Jayhawks officially became sole league champions with 16 minutes left in their game against Texas Tech. Kansas (28-3) then finished things off with a 66-62 victory over Texas Tech Saturday afternoon at the United Supermarkets Arena to put a bow on a dominant run through the league slate.

After having its streak of regular-season titles end last season, Kansas came back and won the Big 12 going away. The Jayhawks finished with a 17-1 clip through the league slate, with their lone loss coming at the hands of Baylor on Jan. 11. The Bears ended up going 15-3 in Big 12 action after dropping three of their final five games of the regular season.

The 17-1 record in Big 12 play gives the Jayhawks their most victories ever in a conference regular season. It surpasses the previous mark of 16, which was done in 2002, 2012 and 2017. Kansas will be the No. 1 seed for the Big 12 Championship for the 16th time in the 24-year history of the conference.

In addition, Kansas finished off a 9-0 run in road games during Big 12 play. The only other time KU went undefeated on the road in conference action was in 2002, when the Jayhawks went 8-0 away from home.

But it wasn’t always a given that the Jayhawks would finish the regular season off with a 16-game win streak. It was a tie game, 57-57, with two minutes remaining. As has been the case most of the year, though, Kansas made enough plays down the stretch to hang on. 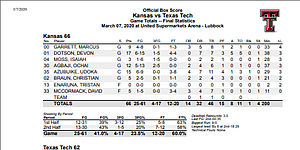 Senior center Udoka Azubuike flushed a putback on the out-of-timeout possession by Kansas. Texas Tech then turned it over, and freshman guard Christian Braun got a layup on the other end to give the visitors some breathing room.

With 36.3 seconds remaining in the contest, junior Marcus Garett came through with a layup in traffic on a strong right-handed drive. It put the Jayhawks back up by 4, and they relied on their elite defense to seal the deal.

KU had three players finish in double figures in the win. Sophomore point guard Devon Dotson paced the team with 17 points on 6-of-15 shooting to go along with seven rebounds and five assists. Azubuike finished with 15 points and 11 rebounds, while sophomore Ochai Agbaji added 12 points.

Texas Tech ends the regular season with an 18-13 overall record, including 9-9 in Big 12 play.

No way was that a foul on Marcus. When Moretti comes down he sticks his right leg out to make contact and then fakes a flop. It was actually a pretty decent follow up on his part considering he threw up a brick.

totally agree, those announcers should be shot.

Dick Vitale can't see because he's so old. He paused for the longest time and just agreed with the side kick. Neither of them could see anything. Waste of airspace.

usually 41% from the field will not win, but with our defense holding them to 37%, I chalk this win up to defense. Wow, our team is good, they bend, but don't break.

Remember a few weeks ago when some were implying that Baylor had the better coach? That he didn’t get the credit he deserves? What a hairball. It was a nice 2nd place season, and hopefully they finish March better than they started, but better coach? Has he won anything?

Is this a COTY season?

Obviously we have 2 of the best players in the conference and nation, but it seems to me that a bunch of this success is about development of Dok in particular and the entire team in general.

The team as a whole is playing great defense, but good grief, 4 guys collapse on Dok, 3 guys don't have anyone on them, and we can't make a three. It has to be difficult to score when 4 players collapse to guard you, it must also be frustrating when you pass it outside and then have to fight for the rebound because your teammates can't shoot a three. TCU triple teamed DOK without much success, so TT quadruple teams him. Someone needs to start making open threes or March is really going to be ugly.

I hear you Mike, but the great thing about this team is that with their defense, I think they have enough to overcome games with poor shooting. Time and again, they've made the big plays down the stretch to pull out close games.

And they will have at least SOME good games in the tournament when everything is working.

I think the defense will carry us through. (I will admit, though, that I am concerned that lately Marcus' FT shooting has been even worse than Dok's.)

This team makes me nervous in the closing minutes/seconds. Just when you think it's in the bag they turn it over or miss a crucial free throw. Twenty seconds and up by 6, we give up a three. Ten seconds and up by three and we miss a free throw to seal the deal and Tech has a legit shot at sending it to OT.

Here's just a thought about the upcoming Big 12 tournament. I hope Self plays some of the reserve players a bit more, and gives our starting 5 a rest for the big dance. I would hate to see us lose any of the starters to an ankle injury or something else. This would be a good time to develop some of the bench players like DeSousa, Enaruna, and McCormack. Even though McCormack plays a reserve role, he could get more reps in the tournament that would give him more confidence. We definitely need DeSousa and Enaruna to be ready to step up and perform.

I'd hate to suffer any injuries for what will be a meaningless tournament but I don't think it's in Bill's DNA to show up for a game and view it as a practice or warm up.

Overall 1 seed is locked and done. Nothing can happen to change that. But I’m greedy so win the Big 12 tournament.

Let's just hope we continue the momentum all the way. My worry is just Dok is going to call for travelling during the tourney. That's the reality of pounding inside as opposed to just throw lobs.