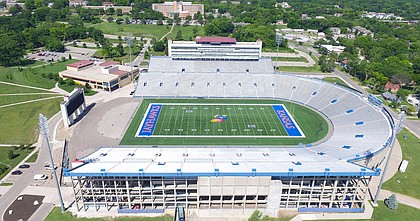 Kansas Athletics on Tuesday night released the results of its most recent round of COVID-19 testing, which yielded zero positives in 156 tests.

The testing, which included 136 athletes, took place last Saturday. KU did not provide a sport-by-sport breakdown of the athletes who were tested. But a large number of them were likely football players.

The news of zero positive tests on KU’s campus comes three days after KU officials announced that the start of the 2020 college football season had been moved up to Aug. 29 after KU scheduled a replacement game with Southern Illinois following New Hampshire’s cancellations of its fall sports seasons.

Opening the season a week earlier than previously scheduled also moved up the first day of the KU football program’s preseason camp, which is now slated to begin Friday.

According to the release, last Saturday’s most recent round of testing — at least the fifth conducted by KU since athletes returned to campus in mid-June — was part of “the ongoing maintenance procedures implemented by Kansas Team Health.”

In addition to football, athletes from KU’s volleyball, women’s soccer and cross country programs have been working out on campus throughout the past several weeks in preparation for the start of their seasons.

The KU men’s basketball team is slated to welcome back its players on Sunday, with team workouts scheduled to begin on Monday.

It seems as though there was some negative remarks back when the Athletic department chose to go with the Kansas Team Health approach for medical, etc. Sure feels like a great decision now all things considered. Pandemic or no Pandemic, a solid decision by Mr. Long and crew...

I recall there were some comments also, that KU was actually leading on this medical practice.

I'm not sure if I was negative or positive about it at the time. I probably was indifferent, but you can see how little changes like that can provide benefit.

My guess is that the recent suspension of activities provided lots of incentive to the athletes to get a bit more cloistered in their approach to life. The news report another program that shutdown recently because of a bunch of positives, as well as the MLB team.

Because there have been a bunch of athletes recovered now, and our own in-house medical team, couldn’t we do some blood work and share the antibodies? Sort of a modern version of the chicken pox parties without the sickness.