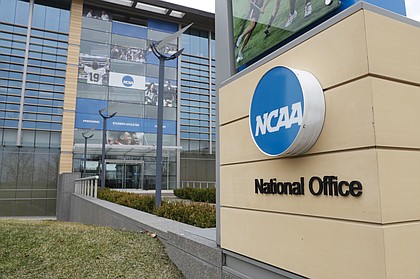 Images such as those, and many more like them, are now one step closer to becoming reality in college towns across the country, as the NCAA is moving forward with a plan to allow college athletes to earn money for endorsements and a host of other activities involving personal appearances and social media content.

The NCAA announced Wednesday that its Board of Governors supports permitting athletes the ability to cash in on their names, images and likenesses as never before and without involvement from the association, schools or conferences.

Ohio State President and board chairman Michael Drake called it an “unprecedented” move by the NCAA.

The next step is for membership to draft legislation by Oct. 30. Plenty of details still need to be worked out, including how to ensure that these sponsorship deals aren’t being used as improper inducements to recruits. A formal vote will be taken by schools at the next convention in January and new rules will go into effect no later than the 2021-22 academic year.

The NCAA fought against allowing athletes to be compensated for name, image and likeness for years, including in court. College sports leaders have said doing so would destroy the NCAA’s amateurism model.

The need for change now was sped up by pressure from state lawmakers. California was first to pass a bill into law that would make it illegal for NCAA schools to prohibit college athletes from making money on endorsements, social media advertising and other activities tied to name, image and likeness.

“It’s clear we need Congress’ help in all of this,” Emmert said.

On Wednesday night, given all of the unknowns that still exist, Kansas men’s basketball coach Bill Self told the Journal-World he thought it was still too early to tell if compensating student-athletes in this way would benefit college athletics as a whole.

“In theory, it’s positive and I certainly hope it works out,” Self said. “And it may be good over time. But I just don’t think it’s a cookie-cutter deal where you can say, ‘Hey, this is really, really good for college athletics.’”

"It's still an unknown," he added. "And how it’s going to be regulated and monitored I think could be something that has far more unintended consequences than what we probably have thought through.”

Last fall, Kansas football coach Les Miles wondered about how small college communities like Lawrence would hold up against the endorsement opportunities offered by businesses in larger cities and states.

The NCAA noted it still will seek a federal law to keep individual states from passing their own laws on compensation for college athletes.

The board on Monday and Tuesday reviewed detailed recommendations put forth by a working group led by Ohio State athletic director Gene Smith and Big East Commissioner Val Ackerman. The recommendations took an aggressive approach, opening the door for athletes to make money on everything from autograph signings and memorabilia sales to signing endorsement deals with companies large and small.

College athletes will not be allowed to use their schools’ logos or markings in any sponsorship deals, but they will be permitted to use agent representation in making any deals.

Smith said there will be “guardrails” in place to ensure athletes are being compensated at an appropriate rate for their services and there will be consequences for athletes who do not meet disclosure requirements.

NCAA leaders have already been engaged with federal lawmakers.

The working group was put together about a year ago, but its work kicked into high gear since the NCAA convention in January.

— The Journal-World's Matt Tait contributed to this report.

Let's see, I'm Adidas and I will get you, Mr. Five Star, a very lucrative endorsement deal if you go to my preferred school.

Yes, the kids should be paid when someone profits from their images, etc., but how on earth is the NCAA going to police this? They can't even police these things today.

Exactly Dale, Now the shoe companies can pay players for their image and to get that deal they have to go to the school of shoe companies choice. Or even a booster. Who's to say that Mark Cuban can't pay a player a million dollars for a personal appearance. So, the apparel companies will want to spend their money to advertise in the largest markets and the schools near the largest markets will get their attention. In addition, players will charge for autographs, photos, t-shirts, their own CD's, autographed sports cards, etc. and so camps, collector's shows become big money makers for the kids. A lot of it untraceable and in cash. So camps and events in areas with the largest number of fans wanting to pay for a signed autograph will be most attractive. Why go to Lawrence KS? KU is not even in a top 20 market.