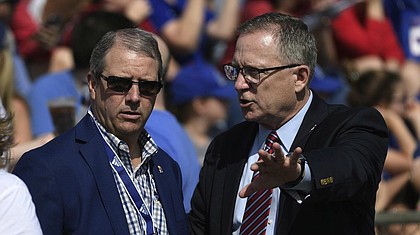 The University of Kansas has joined colleges around the country in implementing a temporary pay cut for high-ranking administrators to mitigate some of the coming losses from the COVID-19 pandemic.

Nearly 40 officials at the Lawrence, Edwards and KU Medical Center campuses, in addition to the three highest-paid athletics officials, will take a 10% pay cut over the next six months, Chancellor Douglas Girod announced Monday.

Girod said the temporary cuts will generate $853,000 to be reallocated at the university level. Salary reductions for men's basketball coach Bill Self, football coach Les Miles, and Athletic Director Jeff Long will generate an additional $500,000 for the athletic department.

"During our tenure we’ve had our ups and downs, but these turbulent times are unprecedented and the immediate future is unknown," Self said in a statement. "These times are serious, but temporary, and it’s everyone’s hope that we can return to a safe and prosperous time soon."

The salary reductions were the only concrete move Girod announced Monday. Though he said that all options must be on the table in addressing the financial challenges of the pandemic, it's unknown whether staff furloughs or layoffs will be needed at KU, as they have been at many universities across the country.

"While it’s still too early to know the full impact of the pandemic, it is clear KU will need to adopt new business models, reorganize and restructure to be more efficient, and implement long-term reductions to address the financial aftermath of COVID-19," Girod said in a written message to campus.

Projecting future enrollment numbers, as well as setting tuition rates for the coming academic year, can't yet happen with any certainty, Girod said.

"We remain committed to protecting our people — particularly our most vulnerable populations — to the greatest extent possible," Girod said in the announcement.

Girod has regularly estimated, and reiterated again Monday, that KU will lose somewhere in the range of "tens of millions" of dollars during the pandemic.

Noble leadership move though I’m not following the numbers. I thought Coach Self made $5M and Miles $2M. Ten percent of those alone are $500k + $200k is greater than $500k and almost the $853k total for the university.

If I read correctly, this applies for only six months.

I think the amounts are also skewed because of the two sources of funding, with both public and private funding. The amount the athletic department gives back to the University isn't going to include any pay cut they take from the private funds - those would need to stay private and the public funds are what the University can re-purpose to non-athletic (or athletic purposes).

The 853K is for non-athletic dept employees and therefore does not include Long, Self, Miles.

The athletic department could save even more money by just ending this ugly lawsuit with the ex-football coach. I can't even say his name he was that bad, but what they are trying to do now is ugly for the university and will ultimately end up costing them more than just paying him off.

500k athletic department savings on a 100m budget is a drop in the bucket and another PR move by AD Long. I'm really beginning to wonder if he is the right man for the job.

I wonder if these poor coaches and admin are going to have to resort to the Dave Ramsey budget method? To me this reads as a precursor to massive lay offs and furloughs that are about to come to those involved in actual educational dealings of the university. I agree it's a PR stunt. I too think Long is suspect. I think his heart can be found in a wallet/payday and that may be necessary to be a power 5 AD? I don't agree with it and that's just my POV on the matter.

On a different side of the story, I wonder how much is being saved by the coaches not flying all over the country on recruiting trips?

Things really get turned upside down though if FB is played in empty stadiums. Maybe the home crowd factor could less of an offset for KU if they require social distancing and only let people occupy every second or third seat. Maybe we could get a “full house”.

If it continues to BB, would it still be considered a sellout if only 8,000 fans are in the Phog?

This can help pay for the Beaty legal fees, too