Coming off the lopsided road win over Boston College last week, it seemed as though the tides had shifted back in favor of Kansas football.

However, KU’s 29-24 loss to West Virginia Saturday didn’t quite match that explosiveness, and the Jayhawks couldn’t gain enough momentum to overtake the Mountaineers in the second half.

Senior quarterback Carter Stanley carried over some of his magic from last week for two big touchdown drives to keep the Jayhawks in the game. He finished 19-for-25 for 275 yards and three touchdowns, but also turned the ball over twice with a fumble and interception. 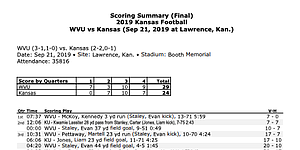 Outside of Stanley, junior wide receiver Andrew Parchment had the biggest day, catching five passes for 132 yards and two touchdowns, both in the second half.

The Kansas defense made plays as well, with three sacks, six tackles-for-loss and two pass breakups, but couldn’t make enough stops down the stretch. The WVU running back tandem of Martell Pettaway and Kennedy McKoy combined for 113 yards and three touchdowns.

Even though they managed to keep themselves in the game through a sluggish first half and slightly more up-tempo second half, the Jayhawks find themselves 0-1 to start Big 12 play.

• The game turned when:

With another opportunity to take the lead with a touchdown, Stanley jogged back onto the field. However, four plays into the drive, the Jayhawks found themselves in another rut.

Stanley dropped back and floated a pass toward his left, intended for junior tight end Jack Luavasa. Instead, WVU redshirt senior cornerback Keith Washington II tipped the ball with his left hand and made an acrobatic interception to turn the tides once again.

It was Stanley’s second turnover of the day, and led to West Virginia touchdown on the other end of the field.

Trailing 20-10 and seeking any sort of momentum, KU got another big play out of junior wide receiver Andrew Parchment.

On first down, Stanley dropped back and quickly found Parchment in space just past midfield. The pass caught him in stride and resulted in a 75-yard touchdown for Parchment, cutting the WVU lead to 20-17.

This was Parchment’s third touchdown of the season and Stanley’s second of the game.

Fresh off a defensive pass interference call on senior cornerback Hasan Defense and needing a stop, senior safety Jeremiah McCullough was up to the task.

West Virginia redshirt junior quarterback Austin Kendall attempted to dump off a pass to redshirt junior wide receiver T.J. Simmons on 3rd-and-goal at the goal line. However, McCullough jumped the route to break up the pass and force a field goal.

And while the Mountaineers converted the 22-yard kick, it was still a one-possession game (23-17, WVU) and a big defensive win for the Jayhawks.

We're not a good team yet but we're not a bad team either. I remain hopeful.

This was a game we would have lost 39-13 in any of the previous 10 seasons. We are turning the corner, it's gonna take some time.

(We are finally registering a heartbeat.)

Today was the first time I can remember since the Texas game of 2004 that the Big 12 football officials have exercised their discretion to steal a game from us. In 2004, the game was taken as the result of a phony offensive pass interference. Today's game was lost because of a bungled defensive pass interference penalty in the end zone. Today's call in the end zone was a worse call than the "no call" pass interference in the Super Bowl, which resulted in the rules change to review calls and no calls. PI needs to be reviewable in college as well. .

Even worse was the supposed receiver interference on the onsides kick!

You have learn how to lose to learn how to win. A game we would have never been in the last 10 years. All l ask is to be completed this year so far so good except for the Coastal Carolina game. Disappointing but encouraging.

Yes, the guys put up a good fight. Bad breaks no takeaways, some bad officiating but we never quit.

We belonged. And that’s a start.

This just proves it wasn't the talent it was who was coaching over the last few years. A coach who is clueless could lose with 5 star players. A coach with a national championship gets the most out of his talent. I'm not saying that there won't be more losses or even ugly ones but the coaching was sorely lacking the last few years. Hopefully the recruits are taking notice and want to go to a team whose stock could be going up in the next couple of years.

I disagree, the KU coaching was suspect, especially OC Koennig. Medium pass call on 2nd & 1 in the 4th quarter when we have the momentum? Should have been a run or a deep pass if the receiver is wide open.

We played well and it was exciting to watch! Our defense tackles hard!

Hate to say it,but as glad as I was that they competed in this game, I don't see another winnable game on their schedule..they may very well go 2-10...again

Very competitive game, I am happy we are not seeing teams take out their starters in the second quarter, let alone after the half. Also encouraging to see the stands with considerably more fans than in the past. Keep it up guys!