Indianapolis — In his much-anticipated Kansas debut Tuesday night in Bankers Life Fieldhouse, fourth-year junior Dedric Lawson forced a couple of bad shots, shot just 27.8 percent from the field, ran the floor with that borderline awkward gait of his and still showed why he easily represents his team’s best shot at making it back to the Final Four.

Most of Lawson’s shots didn’t stay down. Even the ones that looked pure kept popping back out. He made just 5 of 18 field goals. For most players, that would mean it just wasn’t his night. For Lawson, it meant another double-double. He had 19 of those two years ago in his sophomore season at Memphis.

Lawson ho-hummed his way to 20 points, 14 rebounds, six assists, two steals and two blocked shots in leading Kansas past No. 10 Michigan State, 92-87, in the first game of the Champions Classic doubleheader, yet his poor shooting totals were the source of most questions about his night.

At the offensive end, he worked well from the point, the post and everywhere in between. 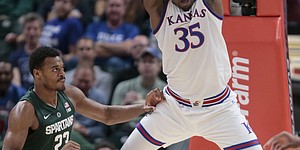 In their first game of the regular season, the Kansas Jayhawks faced off against the Michigan State Spartans in the Champions Classic on Tuesday, Nov. 6, 2018, in Indianapolis.

“He passed the ball well,” Self said. “He’s a good post feeder. He made his free throws. But, offensively, I thought that the physicality bothered him a little bit. They were really good bodying up on him on his shots, knocking him off balance.”

But a bad night? No, Self wasn’t buying that.

“You shouldn’t say he played poorly just because he missed shots,” Self said. “There is so much more to the game than that. Six assists, 14 rebounds and he made his free throws down the stretch. Those are all good things.”

Michigan State coach Tom Izzo bemoaned his team ceding “every loose rebound to Kansas” in the first half and wasn’t happy with the Spartans' inability to stay out of foul trouble.

Lawson was the biggest factor in both areas. He drew a game-high nine fouls and hit 10 of 12 free throws. Many of Lawson's 11 first-half rebounds came on balls he chased down from the perimeter. That’s when he looks his quickest — when closing in on a loose ball.

As a basketball player, Lawson has more physical flaws than mental ones. He’s not very fast getting up and down the floor, and doesn’t slide his feet particularly well defensively. He isn’t KU’s best NBA prospect.

Grimes, who scored 20 points in his college debut, showed in one night that he will be the first Kansas player taken in the 2019 NBA draft. But Lawson's offensive versatility, rebounding and defense near the goal make him a rare college basketball player in the one-and-done age.

His soft passes from the perimeter to Udoka Azubuike will bring out the best in the junior center, who had 17 points, just three rebounds and four blocked shots. That much was obvious.

But it didn't stop there. 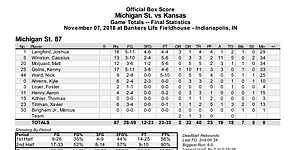 “He can make the game easy for everybody out there on the court, and when you need a bucket, you can go to him,” freshman guard Devon Dotson said.

They went to him, he drew fouls and made the free throws, and the player who missed 13 of his 18 shots was the MVP of the game.

Not being able to dunk will hurt Lawson's stock. He's almost a complete player, but he's got to be able to dunk. He almost looked like a HS player out there. Getting his shots blocked here and there.

looked like a HS player - yes that was a joke. The rest, not a joke, just IMHO. I don't think he's that athletic moving with the ball. He's a great passer, rebounder, defender, supposed to be a pretty good jumper, but finishing to the rim? He needs to build that explosiveness. Look at the oop thrown to him, he's supposed to get up & dunk it hard, not just softly touched it. If he gets blocked so many times by div-1 players, how do you suppose he survives the NBA?

I think Steve has a good point. There were many times when Lawson tried to lay it up and missed when he was open enough to just go up there and dunk it. He didn't display the athleticism to play above the rim in a lot of situations.

He isn't an explosive fast twitch athlete, this is no secret. He measured horribly at the NBA combine two years ago...he was slow and didn't have a high vert. He offsets this with length and craftiness. Obviously he needs to adjust to playing high-major ball as he did get blocked quite a bit. I expect him to do exactly that and he'll have it figured out before conference play.

He lacks explosion. That was the first thing I noticed. In comparison he would be the 40 yr old guy at the rec, playing 5-5 against 20 yr old players. He is going to excel because he knows angles, gets to 50-50 balls, gets to the FT, pump fakes, can hit the 15 ft. The physicality and guys with length really bothered him. Then you look at the stat sheet...20, 14 and 6. That is a great night.

THROW IT DOWN Lawson - Just throw it down.

The least impressive player for KU last night was Dedric Lawson. He forced shots, missed easy shots, got his shot blocked several times, was late on defensive switches which led to wide open shots for MSU. I hope this game was an anomaly and not what we have to look forward to all year. I'll chalk it up to first game on the big stage jitters.

Wrong. The least impressive player was Vick. The guy is a senior and was pretty much invisible.

Um, Joe Black, did you look at the box score or read any of the above article? Dedric was NOT the least impressive player. Keegan's sentiment is spot-on. Lawson had an off shooting night and still was MVP of the game. That's very impressive.

MVP of the game? No that would clearly go to Quentin Grimes because he hit the big shots when needed. We will need Lawson to play well to keep winning but for last night, even with Lawson's double double, Grimes played better. He didn't keep forcing up shots that weren't there and we moved his feet on defense instead of giving up wide open looks to his opponent like Lawson did.

He's a freshman playing his first game against seriously physical large bodies. He has lots to learn but he's also supposedly a fast study. By end of the season these will no longer be weaknesses.

Wasn't impressed with Bill's coaching in the 2nd half. How many times have we given up a comfortable lead and struggled at the end? I put a lot of that blame on Bill not keeping the players focused. He also almost pulled another OU-type blunder by leaving Dok in the game too long, thank goodness Izzo didn't start the Hack-a-Dok or we may have lost.

You missed the 3 times they intentionally fouled Dok the moment he touched the ball in the last 5 minutes? How is that possible?

Jeff must have fallen asleep for the last two minutes of the game... lol.

A quick positive note, he sure did keep a lot of balls alive on the offensive glass. I bet he got a hand on 75% of KUs offensive rebounds.

I remember this quy, not very athletic, played below the rim, adequate defender, excellent passer and rebounder. Great shooter. He had a pretty good college and NBA career. Think is name was something like Larry Bird.

Damn right you are!! Bird is a legend. But then again, that was like more than a decade ago.

wow, I think this article and many posting are being a bit rough on Dedric. No doubt he had an off shooting night, but sheesh, he still found a way to to be one point away from being our leading scorer, totally dominated the boards for KU, led the team in assists, all against the 10th ranked team in the country projected to win the Big 10 conference. I will be happy with him giving us double doubles every game for the rest of the season. Despite the off shooting, he STILL found a way to contribute to our win, as big as anyone on our team. 14 rebounds??? How many times do we have a player do that? Come on folks, ease up!

If this is Tom's final article for the LJW. It's been a pleasure. Best wishes in Boston.