Mike Lee first met Corione Harris about five years ago, and grew to know his fellow defensive back well while he and Harris teamed up at Landry-Walker High, in New Orleans.

His understanding of Harris’ potential led Lee, the predecessor among the two four-star prospects from the same prep program in Louisiana, to have lofty expectations for the incoming freshman.

All the same, as the duo reunited at the University of Kansas during this past spring semester, Lee also appreciated Harris’ situation. Entering his junior season with the Jayhawks, Lee, a safety, wouldn’t judge the young corner too harshly if it took him some time to adapt to playing at the college level.

And that’s why even the KU veteran who knew Harris best walked away from spring practices impressed.

“You know how some high school players get to college and they fall off a little bit?” Lee asked rhetorically. “Well, he got here, and he was like, ‘I’m ready to play.’”

A 6-foot-1, 180-pound cornerback who graduated from high school early in order to enroll at KU this past January, Harris showed up set to prove himself worthy of the hype that made him one of the most anticipated recruits in the program’s recent history.

Lee said Harris smoothly transitioned to FBS practices because he’s “very disciplined” and possesses the ability to focus on assignments. 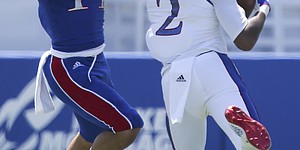 One of the many advantages of having Harris on campus and competing this past spring proved to be the effect his presence had on teammates.

Hasan Defense, who started 10 games at cornerback for Kansas in 2017, welcomed the addition of a budding freshman capable of stealing playing time from veterans.

“That definitely makes me work a lot harder, knowing I’ve got someone like Corione behind me who we’ve brought in who’s really good,” Defense said. “That makes us all compete a lot harder. We all push each other. We’re competing, but at the end of the day, we know we’ve all got to work together to get to our goal.”

The first characteristics of Harris’ that jumped out to junior nickelback Bryce Torneden were the corner’s ball skills. Torneden described Harris as long and rangy with natural speed, all of which empower the freshman to go make plays on passes as they reach their destination.

“He just makes it look effortless, kind of. Just defending some fade balls, and going up and getting them,” Torneden relayed of plays Harris executed during practices. “It looks easy.”

From the first day of spring practices, Harris began standing out to teammates and coaches alike. Lee recalled how the would-be high school senior intercepted a throw to the receiver he was covering during the earliest one-on-ones of the spring.

“I was like, ‘Wow.’ Like, he really came to play. He really showed he could bring a lot of energy to the defensive side of the ball,” Lee assessed of his former Landry-Walker and current KU teammate. “He’s a great cover cornerback, man-to-man cornerback. He’s a lockdown cornerback, so, really, that’s what I like about him.”

The proof is in the pudding. Produce on game day. Who cares about practice. Big 12 competition is the proof, not our scrubby quarterbacks.

It will be good to have all the DB's back, and more experienced. Rather suspected that replacing 4 of 5 with the only returner being a young freshmen was going to be tough last year. To add a potentially lockdown corner to the mix could be huge.

My guess is he will still have plenty to learn, and will get burned plenty of times, but will have people drawing comparisons to Talib.

This year the Huge question is what do we have at DE. Didn't we lose all our DE's from last year, and most in ways that couldn't be planned for with recruiting. The JC DE's will be crucial to the success of the season. Well, that and an offense that can give the D at least a little time to rest.

Can’t agree with you more Kevin. Right on.

Dirk,
We have the bodies at DE, but the experience at D1 is missing. There is ample athleticism at the position. Here's hoping the speed of these guys and the strength of their teammates (we have some guys who are light and quick and others who are bulkier) can be utilized to help Daniel bring some real pressure on the QB's.
Last year was a bad combination. Dorrance was not getting sacks and we had green guys in the secondary.
This year we have green guys at DE, but talented, and talented and experienced guys in the secondary. Should be better as our coaches can scheme our DE's to get pressure.

Coach Hull has definitely "Earned It" as a recruiter in an area of the country that KU never recruited before. Texas is so well recruited by dozens of colleges that the really good players don't slip by unnoticed anymore. The Louisiana players are a welcome addition to our team because of their talent and desire to win. If KU only recruited the greater Kansas City area as well as they do Louisiana and Texas, we'd be in much better shape talent wise.

I love coach Hull but - other than Lee what have any of the LA recruits done? Seriously. I am asking because maybe I am drawing a blank but no others jump out at me.

They're still relatively young and a couple of the better ones have left the program. I'm hopeful that Charlot will turn things around this year. He seems to have that elite"it" if he can just put it together with the consistency to stay on the field.

I do think that there are improvements out there, but overall I have no perspective and would appreciate it. I'm fearful of an 0-12 season, but maybe I'm not connected to all of the transformation.

For instance, QB added a JUCO transfer, one more year of experience from Bender and Stanley. The QB play should be about the same.

DL lose of Armstrong, replacing with a JUCO transfer, could be a downgrade overall.

Receiving Core, added these, lost these, overall could be an improvement.

Just would like some realistic thoughts in the changes.