Those inquiring about what the upcoming season holds for Kansas football will direct their questions at head coach David Beaty and four of his players next week at Big 12 Football Media Days.

KU announced Monday that program veterans Joe Dineen, Daniel Wise, Steven Sims Jr. and Khalil Herbert will accompany Beaty to the Ford Center at The Star, in Frisco, Texas, for a day’s worth of interviews, photo shoots, promotional videos and more.

No stranger to the festivities as a redshirt senior, this marks linebacker Dineen’s third consecutive summer representing his hometown university at the Big 12’s annual mid-July gathering. A former prep standout at Lawrence’s Free State High, Dineen emerged as a second-team all-conference performer in 2017. He led not only the Big 12, but also all of FBS, with 7.6 solo tackles per game, set a KU single-season record with 25.0 tackles for loss and delivered 137 total tackles. 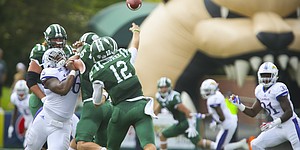 Another fifth-year senior for the Jayhawks, Wise, a defensive tackle from Lewisville, Texas, will make the trip south to media days for a second straight year. A first-team All-Big 12 selection by league coaches following his redshirt junior season and a second-teamer according to the Associated Press, Wise made 16 of his 53 total tackles behind the line of scrimmage and led KU with 7.0 sacks.

A senior who proved to be the Jayhawks’ top receiving threat, leading the team in receiving yards, catches and touchdowns each of the past two seasons, Sims, from Houston, will make his maiden voyage to Big 12 Media Days. In 2017, Sims averaged a career-best 14.2 yards per catch and finished the season with 59 receptions, 839 receiving yards and six touchdown catches.

The youngest face representing KU football in Frisco, junior running back Herbert also will experience the conference’s media showcase for the first time. Though injuries limited his impact in 2017, Herbert, from Coral Springs, Fla., led Kansas with 663 rushing yards and four rushing scores, while averaging 5.5 yards per carry.

The Jayhawks will join coaches and players from TCU, Texas Tech, Iowa State and Oklahoma this coming Monday at The Star, world headquarters for the Dallas Cowboys. A former standout at Lawrence High, OU defensive end Amani Bledsoe will be among the Sooners in attendance.

Big 12 Media Days wraps up on July 17, when representatives from West Virginia, Texas, Baylor, Kansas State and Oklahoma State take their turns in front of the cameras and microphones.

Should just have a chair for (former) coach Beaty with just a ? and leave it empty.

I wish this kind of wasted and incessant sarcasm would take a break, at the very least, until the season begins.

Unfortunately, Forrest Gump has a line to describes it all too well.

Oh good zinger Dirk did you have to sit down after thinking that one up?

Oh Steve did l hurt your feelings? Yeah l already saw what the last 3 years brought so too bad.

Are you a child on summer break?

Four really good guys who stand beside their coach. They are class acts and will represent the University well. Good choices.

The guy is gone whether before during or after season, he's dead man walking and everyone from the administration to the players knows it. It's big boy time KU can't waste anymore seasons being one of the worst teams in the country when conference realignment comes around. We had 3 years and what a win against RI SEMO ST and a gift from Texas? A few close losses to TCU? But mostly embarssing blow outs and the same incompetence game after game. So lm wrong for saying what lm saying? He stinks sorry time to move on he stinks. Let's see if lm right let's see how soon the administration dumps him.

Is it safe to assume from your childlike grammar that you didn't attend KU?

I can tell from your Shakespearian reply that you did. See you have no real reply to the reality of the program so you go to the grammar card. Cute.

The predictable stupidity from deranged kooks is at least getting more and more amusing.

Imagine the explosions in these damaged minds if Beaty wins 6 games this season!

He won't Jay so it's a moot point. Imagine if l woke up tomorrow and l was 6'5. Not going to happen. So he goes from 0 to 2 back to 1 win then all if a sudden up to 6? Get real. If a mircle season was going to happen it wouldve by now. 3 wins Jay 3 and two against RI and SEMO ST. Are you for real? Every publication in the country has them finishing last but the few on this sight who homer til they die think some mircle will happen, it won't. And the realist are the kooks? Did you watch last season?

Jay - Unfortunately he's not on summer break. The season makes no difference.

Kevin, you are most likely correct in saying that Beaty is gone. But you are all delusional thinking the next coach is going to lead us to the top. Won’t happen.....EVER. Take this years team, talent wise and depth. How many TRULY top tier coaches are there. Maybe 10 and they ain’t going anywhere. But, if they did, what could they do with this team? 9 wins maybe? Just not enough 4 and 5 star talent or depth. So, let’s go to the next tier of coaches. What would they do with this team? 7 wins? Perhaps, but 6 is more realistic. That is what you are looking at with the next coach. Best case scenario, 6 wins. A couple of bad breaks and it’s 5 wins. Can’t wait to you start calling for his head too. Get out of the heat, that’s a dangerous situation.

I never said top ie OU Ohio St Alabama etc. But is it too much to expect to be remotely competitive? I think KST fans know and except who they are. Anything close to that is a win for KU.

One would think Keegan’s no less than 3 articles written at Beaty’s expense (lame duck, countdown to firing, etc)… all since the recent news of the new AD hiring… would be enough for the Fests and McCabes on here to spew their venom and vile not just toward Beaty… but also anyone who dares support the program as it is now… regardless of who is the coach. This article by Benton Smith is a neutral article about Football media day and spelling out what players will be accompanying Beaty on the trip. Guys like Kevin yearn for banter, attention and combative diatribe under the guise/pretense that they really care about the program. Many of us know that this is a disservice to the players currently on the team.. the seniors who came back and who support their coach. I suggest refraining from engaging in this banter that serves no purpose. Regardless of who is coaching this team and what decisions regarding a coaching change are forthcoming, I will continue to watch KU football, support KU football and allow the new AD to assess the situation and trust him to make his best, educated decision. The crap spewed here on this forum will play no factor in this decision, so let Kevin have the last word so he can have his daily Stuart Smalley affirmation. Now then… I look forward to a more competitive product on the field this year. If there is not drastic improvement, changes will be made, and I will support that. In the MEANTIME, David Beaty is our coach, and I will support him as he is part of the 2018 football program until AD says differently.

Thanks for buring your head in the sand Mike. Real fans ask for change when change is needed, not just except status quo. Nice reply though. Some how lm the bad guy because lm not like the rest of the sheep on here.

Don't let the mocking and ridicule stop you. You're great entertainment.

Whacko? Why because l don't want to watch a 4th year of this mess? Baaahh just like the other sheep Jay.

Good advice Mike. My original post on this article as about the 4 classy guys who will respresent us well. I somehow allowed myself to get sucked into the dead dribble that accomplishes nothing. Thanks for bringing me out of it.

Tom Keegan & his idiot minions will continue to “resist”....