The latest on Silvio De Sousa, Billy Preston, both of whom are still waiting for their turn to play 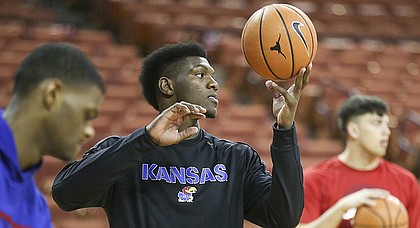 There was some hope Friday that a ruling about De Sousa's amateur status could come down from the NCAA. But Kansas coach Bill Self told the Journal-World on Friday evening that there was, “No news; hopefully in the morning, they said.”

With that ended a wild day of speculation that began mid-morning with Self saying, “I think it's going to be a great Friday. TGIF. We've been waiting for Friday all week. Check with me at 5 o'clock. Who knows?”

Those words, while encouraging, certainly did not promise any kind of resolution in the situation surrounding De Sousa or Billy Preston. Many KU fans, especially on Twitter, believed otherwise and spent most of Friday counting down the hours until 5 p.m.

When the time came and went without any good news, the collective eye roll and groan of the KU fan base grew louder.

Self later told the Journal-World, 'This is about Silvio. Definitely no news on Billy and no timetable.”

So, on it goes, with both freshmen forwards whom KU officials hope soon will be on the court and in the rotation, helping the 12th-ranked Jayhawks (13-3 overall, 3-1 Big 12) contend for a 14th consecutive Big 12 title, sitting in street clothes waiting for their time.

If, by some chance, the NCAA does return a positive ruling on De Sousa this morning, thus making him eligible to play against Kansas State during today's 11 a.m. tip-off at Allen Fieldhouse, Self said he would have no problem putting De Sousa on the floor.

“His attitude is unbelievable because he's doing two or three times more than anybody else every day. Whether it be going to Watkins and getting certain tests done or the extra physicals or meeting with compliance two hours a day. So I think his attitude has been absolutely terrific.”

So there’s “no news” but if there is news, it definitely won’t be about Billy. Doesn’t that mean there is at least some kind of news as it pertains to Silvio?

There’s zero chance someone from the NCAA is working tonight or tomorrow morning. I never fault Bill, but he really should just be quiet until he has concrete info. He’s been saying the same thing for 3 weeks. Silvio is NOT getting cleared on a Saturday morning.

KU must be paying for its sins in the Cliff Alexander case.

We already paid for that.

Groan, not grown. And thank you for the update, I'm crossing fingers for a positive resolution soon.

But Mo Bamba who recieved money from his "mentor" was cleared without any issues .......makes you wonder

Well, that d-bag Oliver Luck probably doesn't care about Texas, but he does care about ensuring KU doesn't win another B12 title - especially when his Mountaineers are in the hunt for the title.

If the NCAA were a legitimate organization, and not the farce that they've continually shown themselves to be, they would require Luck to recuse himself from all decisions pertaining to B12 athletes.

Coach only responds because he keeps getting asked. That's why his response seems to me to be draped in sarcasm.

Good insight, Lewis Mitchell, though I suspect that there are a few people with the National Criminal Authoritarian Agency who don't want KU to overtake UCLA for the conference championship record.

No news is bad news. At this point I'm just hoping we hear something before Preston joins AARP.

Just read that the NCAA ruled the Auburn player ineligible. It was part of that FBI bust earlier. Apparently the agent in that case got around 91k and dished off 11K to one recruits family and 9.3K to the other recruits family. Those numbers worry me as they seem quite a bit lower than this car. Again all speculation. But it does sound like Coach is distancing himself from any good news any time soon on Billy.

I don't understand why Dr Zenger is not sitting in the NCAA office, 24 hours a day until this is resolved.

Please don't tell me he is too busy evaluating the football coach and staff.

Our compliance department hasn't sat on the MU fellows at the NCAA office yet? Look at my shocked face....

PS Please insert a B between the last F and the last O...thank you.

I’m just SHOCKED. All of this is probably just fake news. Lol.

The playing status of these two guys should not be a Mueller-style investigation, but that's what it is apparently turning into.