More than a month in advance of spring football, Kansas coaches shared the bad news with their players.

It was around that mid-February day when new KU offensive line coach A.J. Ricker sought out Andru Tovi, an eight-game starter at guard for the Jayhawks the previous fall.

Would Tovi, Ricker inquired, have any interest in giving center a shot?

“I told him I was open to playing any position to help the team,” Tovi recounted of the conversation that led to his shift in responsibilities.

Tovi spent a year playing next to Ribordy, forced out of the game prematurely due to concussions, so the 6-foot-3, 320-pound junior from Hawaii knew how important Ribordy was for the Jayhawks. Tovi, after transferring from Pima Community College (Ariz.), often listened to Ribordy harp on the crucial nature of the O-linemen’s assignments and identifying matchups at the line of scrimmage. 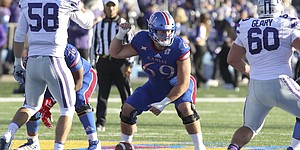 Kansas redshirt sophomore center Mesa Ribordy (69) gets set at the line during the third ...

“It was great having him,” Tovi said, describing Ribordy as “a different type of O-lineman,” as much an analyst as a blocker.

The recent football retiree is still around the program “here and there,” according to Tovi, helping with technique and offering advice. But now it’s up to Tovi, a longtime guard, to try and become as impactful a center as the man who played the position before him.

In the midst of his spring introduction to playing center, Tovi conveyed he’s still learning.

“I didn’t know you had to be so vocal,” Tovi revealed. “And just looking at my past teammates, like Mesa, he told me that it’s a lot of communicating with your linemen, making sure that everybody’s on their right tracks.”

Of course, another key to the position, particularly since KU’s offense runs much of its playbook out of shotgun formations, is snapping the football with accuracy. According to head coach David Beaty, Tovi already more resembles a center than a lineman trying to fill in at center.

“That's good. I mean, from a snap standpoint, his snaps have been great,” Beaty reported. “I mean, that's something that you worry about from the very beginning, because even one of those (an errant snap) can change the complexion of the game. We've seen that happen over our time here. It happens all the time throughout the country.”

The larger and more experienced Tovi seems to have a leg up on redshirt freshman Joey Gilbertson (6-4, 290) at center, but Beaty praised the young Wichita native, too, calling Gilbertson a “tough son of a gun.”

Said Beaty: “We like them tough dudes. He's a wrestler, and he gets his hands on you. It's fun to watch.” 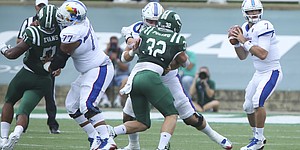 The concept of toughness has featured prominently within KU practices, workouts and study sessions this off-season. Tovi explained why Beaty has thrown around the T-word so often and what the coach means by it.

“Just straining every play. No time off, and also basically learning the fundamentals that you have to learn, from getting from one point to another,” Tovi shared. “We have to do the little things. And technique also is a big factor to it.”

Tovi realizes much will be asked of him not only at the line of scrimmage, but also, in a more general sense, as a leader and in-game analyst of sorts. Basically everything for which Ribordy was known.

He’s still working on all of those center requirements. As concerned as Tovi is with making the correct calls and getting his fellow blockers to their assignments, he’ll also persistently demand toughness out of his teammates, because that’s part of leading the O-line, too.

“This year,” Tovi said, “we’re focusing on being more physical up front.”

It never occurred to this staff after losing Ribordy for 2 epic disastrous games to get another competent center on the roster during recruiting season. 5 months later they learn that Ribordy is done and they're stuck. This 3-33 staff never ceases to amaze me.

What really surprises me is we already have a 3 star center on the roster (Jacob Bragg), but he's not good enough? How has he not developed over the past three years into a serviceable center? It boggles the mind, but ultimately, I'm glad Tovi is making progress. However, without the glue that was Mesa, this line could end up being even worse than last year.

You realize you can't develop someone who isn't good right? Jacob Bragg was clearly a miss and it has been obvious for quite some time now.

If Bragg isn't good --then yo boy DB did a crap job of eyeing a recruit -- again.

Regardless - DB and Yenser didn't play this 3 star up ...

I know you're too busy focusing on the bad parts of DB, but Reuben Lewis can play center, he just isn't here until June.,

But keep up the hating, I'm sure it is a lot of fun.

Never thought of Tovi being a center. I liked him as one tough, physical guard. I hope he works out at center.

I seem to recall they tried Jacob at center last year or was that the spring game along with several other players because they weren’t getting the snap back to the QB.

It would seem very reasonable that they were expecting Mesa to return. While there are an increasing number of players that aren’t returning from concussions there are still plenty that do. So between Gilbertson being the OC of the future and the dreaded JC recruit Lewis (whiff by the author?) being the insurance for the next 2 years, it sounds like the coaching staff has made the best of a bad situation and have the bases reasonably covered.

nice pic from the ohio game, a clear holding penalty!