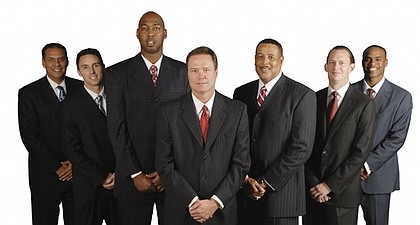 Bill Self’s coaching tree never has looked more lush than it will on Selection Sunday.

Each coach is allowed three assistant coaches with full recruiting privileges, and six different men have served in that capacity during Self’s 14 seasons at Kansas.

All six men will coach in the upcoming NCAA Tournament, including three as heads of their own programs.

Danny Manning’s Wake Forest Demon Deacons, a consensus pick to finish 13th in the 15-member ACC, exceeded expectations by going 9-9 in the regular-season. The Deacons opened postseason play by blasting Boston College, 92-78, in the ACC tourney to extend their winning streak to four games, including one against mighty Louisville.

Even if Wake doesn’t defeat Virginia Tech in the second round, no way the selection committee can deny the Deacons now. Manning, in his third season at Wake, took Tulsa to the tournament in his second season.

The Wake Forest turnaround from a 2-16 conference record a year ago speaks to Manning’s coaching ability. So does the fact that John Collins, a three-star recruit from West Palm Beach, is averaging 19.1 points, 9.8 rebounds and 1.6 blocked shots in his sophomore season and is projected by draftexpress.com to go 15th in the NBA draft. Brett Ballard, who worked under Roy Williams and Self at Kansas, is one of Manning’s three assistant coaches.

Tim Jankovich, who left his job as head coach at Illinois State to become coach-in-waiting at SMU under Larry Brown, is in his first season as head coach at SMU, although he went 9-0 in 2015-16 during Brown’s NCAA-mandated suspension.

SMU ended its 27-4 regular season by blasting Memphis, 103-62. The Mustangs have won 23 of 24 and have set themselves up for an at-large bid if they don’t win the American Athletic Conference tournament in Hartford, Conn.

Self is bound to face one of his former assistants in the NCAA tournament, maybe as soon as this year, and people will cry that the committee rigged the deck to make it happen in order to set up a story line.

Wrong. With so many connections, it's inevitable.

I didn't realize how little turnover there has been among Bill Self's assistants. No one has left unless they had a real meaningful offer to start their own program.

Says something about the air in the Phog, eh what?

Is Kurtis Townsend a career Assistant Coach? Or, has he been approached about Head Coaching positions and declined them?

There was an article not too long ago that mentioned he'd had offers but is in no hurry to leave. It would have to be an opportunity just too good to turn down. He has a good deal here and is very highly respected.

This is not the article I was thinking of but it essentially says the same thing. http://www.courier-journal.com/story/...

likely around a half million a year plus car and country club is hard to beat. kansas travels to the best bball venues there is and plays on the highest level. but home is where the heart is and he's good enough to turn around a program.

Kurtis has said on Hawk Talk that he loves the college atmosphere in Lawrence. He is really satisfied with being Coach Self's assistant coach. I think the right offer would have to come along. Just speculation on my part.

Jank stayed with Self for 10+ years before he made the jump to the FGCU job that was ripe for the taking after Enfield left. Norm left for a few years and came back home. Self obviously treats his guys really well or that wouldn't happen. I think Kurtis is smart and happy where he is and recognizes the pressure and stress of trying to orchestrate a rebuild somewhere small is not nearly as exciting as coaching at Kansas every year.

That's who I meant! Thanks for the correction...

Also, Justin Bauman was on Coach Self Staff (was co-director of BB operations with Danny) and is now Director of Basketball Operations of Wake Forest.