It was just a single moment in a simple drill during the first team workout of the summer, but it was as telling as anything possibly could be about the new reality for the Kansas men’s basketball team.

After William & Mary graduate transfer Jack Whitman missed an uncontested, left-handed hook shot in the paint from three feet out, the frustration was evident on his face.

Down on himself for missing the easy bunny with the coaches watching closely, Whitman lunged after the bouncing ball and started to head to his place at the back of the rebounding line.

Moments later, on the opposite side of the basket, sophomore center Udoka Azubuike could be seen giving detailed instructions to freshman forward Billy Preston about a drill, his footwork and how to gain proper position. 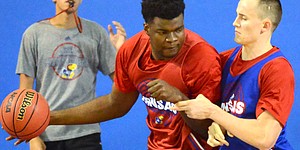 Kevin Anderson/Special to the Journal-World

Landen Lucas they are not, but Azubuike and Lightfoot are, by far, the most experienced big men on the 2017-18 Kansas basketball roster. And, at least at the outset of summer, the two returning big men are taking that role seriously.

“Oh, they will, with the bigs at least, because they are the leaders of the bigs so they’ll take a leadership role,” said KU coach Bill Self about Azubuike and Lightfoot’s sudden status as the Jayhawks’ best role models down low.

While a good chunk of their impact on the Kansas front court likely will come from the numbers they put up and the minutes they log when the season rolls around, setting the tone for Preston, Whitman and Memphis transfer Dedric Lawson, who will sit out the 2017-18 season, may be as important for the future of Kansas basketball as anything either player does this season.

Self said that was particularly true for Lightfoot, who begins with a head-start in the competition for playing time next to Azubuike with Preston and Whitman.

“Mitch may be (in the position to slide into more of a leadership role) as much as anybody else because he’s a really good drill guy and guys can follow his lead,” Self said. “Probably up until October guys will look to him as one of their key guys to try to watch and follow.”

Lightfoot, who played limited minutes in 26 games last season as a true freshman, knows that both a golden opportunity and a potentially big season await. And he has not been shy about calling this the biggest offseason of his playing career to date.

While his performance this summer and in the months leading up to Late Night and the start of the season in November will determine how big his role will be, Lightfoot possesses a team-first mentality and gladly will do whatever is asked of him.

As for Whitman and Preston, Self seemed excited about both players following the opening day of summer workouts last week.

““He looks as good as anybody we’ve had in here at that four spot, physically,” he said of Preston. “... He’s got a lot to learn but, certainly, I’m glad we got him.”

Of Whitman, he added: “I think he’s bouncy. And I think he’s pretty smart. He certainly doesn’t have to score a lot of points for us but he can be a guy that can understand what we need to do offensively and he’ll score off of other people’s plays and he’ll be a good ball mover. I think he can play with Udoka.”

"I think he can play with Udoka.” That is really the crux of any discussion about frontcourt rotation this year.

I would love a frontcourt in 2018-2019 season that features Azibuike AND the Lawson twins. That would give KU the most front court talent and depth since the days of the Morris twins starting with TRob on the bench..or at least with Aldrich/Markeef Morris.

Mitch is a born leader. I predict that he will come as close as anyone to achieving his full potential by the time he finishes at KU. You have to know that Coach Self loves having him on the team.

for a guy who is only 6'8 (short for a PF, even in college) he sure had his fair share of blocks last year. He may have been raw on offense but he looked good on D

I'm convinced we will only have Dok this coming season. He will be a top 20 pick in the next draft.

I might be incorrect in this, but Dok was born in 1999. He won't be 19 until September of 2018, which means he's not eligible for the next draft, right? So we have him for 2 more seasons, unless he left to play in Europe or somewhere.

oh wow, never thought about that, certainly hope you are right!

I'm afraid you are probably right, Barry. Also, I would imagine that Malik Newman will join him, and then, of course, Devonte graduates. Also, wouldn't surprise me a bit if Preston flirts with a one and done if he gets a whiff that he would be drafted. Given his height and potential, someone is likely to take a chance on him like they did with Cheick Diallo.

In short, next year will be the year of the transfers with the Lawsons and Charlie Moore playing major roles. Just a further reminder that recruiting can't take a year off. Fortunately, KU is blessed with a head coach and staff that always gets the job done.