On a night when Bill Self’s Kansas basketball players did what they always seem to do — win at Allen Fieldhouse and accumulate new Big 12 championship gear — an unexpected conqueror emerged from the KU bench.

He wore the same headband and No. 15 jersey as the Carlton Bragg who has struggled to stay out of Self’s dog house both on and off the floor the past several months, but played less like that slumping sophomore and more like the forward many envisioned occupying a starring role on KU’s 13th consecutive league title-winning team.

Four days after logging just five minutes in the Jayhawks’ crucial road victory at Baylor, Bragg went from non-factor to bench stalwart in his team’s 87-68 win over TCU.

The same 6-foot-10 big who registered double-figure points just once in conference play prior to Wednesday night, stepped on the floor determined to make an impact. 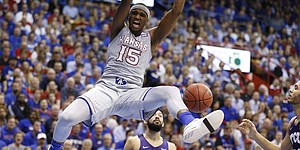 View a gallery of images from Wednesday night's game between the Jayhawks and Horned Frogs at Allen Fieldhouse.

Bragg kept the ball high, out of the reach of the Horned Frogs trying to stop him, on two early paint touches, and put up four quick points just more than two minutes after subbing in for senior Landen Lucas. By the end of his 22-minute night (the most time he’d spent off the bench since Nov. 21), Bragg tied his career high with 15 points, delivered two emphatic put-back jams on the offensive glass, totaled seven rebounds and swatted away three shots.

Given that Bragg’s stat lines of late have resembled those of a 12th man, rather than a trusted member of the rotation, even Self had to be a little surprised, right?

“No. We haven’t been going into the game thinking we can count on 15 and seven obviously, but he’s a better player than what he’s been able to show so far,” the Kansas coach countered, “so hopefully this will propel him to some bigger games down the stretch.” 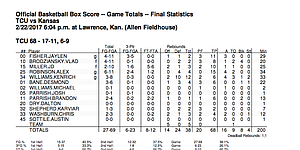 With the smile that he flashed so often during his freshman season a year ago back on his face following the victory, Bragg said his teammates shared a similar message with him after his most impressive performance in what had to seem like years for the Cleveland forward.

“Just take another step. Just build on it,” Bragg shared of the words of encouragement he received in the locker room, after the Jayhawks added yet another Big 12 trophy to their case. “You can’t rest on it. Don’t take things for granted.”

“In my opinion,” Jackson said, “best game of the year so far, and hopefully we get to see more.”

Bragg has been through a lot this season, including facing charges for battery (dropped a few days later) and possession of drug paraphernalia (granted a diversion), prompting his coach to suspend him a game in December and three more in late January.

In the 14 games that followed his first off-court issues and suspension, Bragg reached 10 points just once. He said his out-of-nowhere performance versus TCU (17-11 overall, 6-9 Big 12) came with the behind-the-scenes help of Lucas, a senior. Bragg added he stayed patient throughout his funk by employing patience. What’s more he didn’t get too down on himself — even if he appeared visibly frustrated during games upon blowing an easy shot or missing an assignment. Bragg said senior point guard Frank Mason III, too, kept him positive.

“His leadership is unreal,” the sophomore said of the veteran. “He just leads the team and we just follow him. It’s been insane throughout this whole year.”

Bragg said he entered the night wanting to influence the game with energy and by making “the little plays.” His coach wasn’t certain what fueled the dramatic turnaround exactly, but said his backup big man looked more athletic than he had in recent showings.

“He didn’t finish a couple of baskets — he and Landen both in the first half, getting shots blocked underneath the backboard,” Self pointed out after Bragg finished 7-for-10 from the floor. “But I thought he looked a lot more bouncy and athletic. And his hands looked really good. He caught some hard passes. I thought he played extremely well — and we needed him tonight.”

They’ll need him again on many nights to come if Kansas wants to add Final Four T-shirts and hats to their ever-growing wardrobe. The trick for Bragg now will be finding ways to duplicate the impact he made in the weeks ahead, as Kansas tries to win games in March in arenas not packed with fans who love the Jayhawks.

Now that the relief of securing the Big 12 title is out of the way for the whole team, Bragg took some personal comfort in displaying the form so many figured months ago would be his standard.

“I got a little swagger back, getting my rhythm going,” Bragg said. “But I’ve just got to keep building on it. Take it step by step.”

Jayhawks celebrate after winning their 13th-straight Big 12 title by KUsports.com 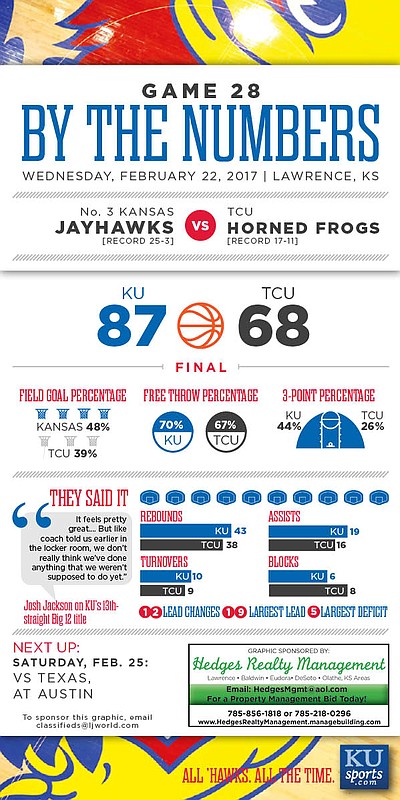 — See what people were saying about the game during KUsports.com's live coverage.

More news and notes from Kansas vs. TCU

Great work by Bragg today. I still don't think this team/staff realize how high his ceiling is. How many lobs from PG to Bragg have we seen so far? Not even a single one I can recall. We need to bring the beast out of Bragg. Ever since gaining more pounds (muscle, to some), he's not as quick as he was in high school. But with some disciplines and coaching, he can move quicker and jump quicker/higher. Back in 2006-2008, we've seen so many lobs to bigs (Kaun, Arthur, etc).. it's so demoralizing to our opponents. It's good to see some lobs and dunks vs TCU today. Let's make it a habit each game (seen mostly from JJ). Get Bragg involved more!!!!

"Ever since gaining more pounds (muscle, to some), he's not as quick as he was in high school. But with some disciplines and coaching, he can move quicker and jump quicker/higher."

Does this make sense in some language other than English?

This game resulted in a larger scoring spread than most of our recent games. We have been saying a Bragg like this could be an additional element we need to get to a Final Four. Hard to argue with the video evidence.

One thing that stinks is his inability to hit the 8' to 15' Jumper anymore. He air balled one last night. Lol.

I try to not post anything negative about anybody else opinion, but Steve Zimmerman you are getting under my skin. You constantly have this hard critique of Frank and then you have the nerve to say when the last time somebody threw Carlton a lob as if the guys are going out of there way not to. I have high expectations for Carlton and I for one feel that he is an important part of the team for the stretch run,but you give your reasoning for why he is not receiving any lobs because I would definitely like to hear it. And by the way I am sick of your comments about what Frank needs to do , again he needs to do what his coaches tell him to do and from where I am sitting it seems to be working and not what you feel he needs to do because of your strange idea of what your expectations are. I have in the past apologized for my attitude towards your comments but not this time because its obvious you have a bias not me.

My bad, I have some sort of 'getting old' disease perhaps I should have someone read my post before submitting it. I appreciate your posts. I have high expectation out of each player.. Rock Chalk!!

Looks like Bragg stopped having Lucky Charms for breakfast and switched to Wheaties!

Where have you been?

The 'Horns have two bigs on the floor the majority of the time. With #13 locked up and celebrated, it would be a good time to get Bragg 30 mins and Coleby and Lightfoot 10 each.

Couldn't agree more Jay. - - Just wondering really how important is it really for us to win post season Big 12 tourney? - -Think this would be a good time to try and rest the guys some. - -Refresh their legs. - -Start Bragg,, Vick , Svi get some rest at least some for Frank , Devonte, Josh, Landen, hell start Coleby or Lightfoot at the 5 , Bragg at the 4- - - just have Devonte and Frank and Josh get spot minutes, a little rested for the NCAA'S

It is important. It helps to improve our seeding status and get us the Tulsa-to-Kansas City road to the Final Four we desire.

If Bragg is somehow able to maintain a high level of play then it certainly justifies him getting up to 30 mpg. That would allow Lucas, Jackson and maybe even Svi a little more rest before the NCAA.

I've always wondered why Coleby hasn't played more often unless his knee is bothering him more than what's been reported. Getting both Coleby and Lightfoot 10 mpg might be problematic unless we are in a blowout situation.

Coleby looked pretty good with the dunk last night, and he's looked fairly good to me in some of the other games he's played, but maybe the knee just can't take all that many minutes. Or maybe I'm not much of a judge of playing ability, although I don't expect him to play like Embide, and he doesn't, I didn't think he plays poorly.

Absolutely, Bryce. If we aren't a #1 seed, then you can kiss KC goodbye for the regional finals. The NCAA won't give us that location against a #1 seed. The closest example I can remember is 2007, when we were the #1 seed in the West, and they put UCLA as the #2 seed when the regional finals were in California. They beat us in the Elite 8.

There are a bunch of hot 3, 4 and 5 seeds at this point that you wouldn't want to meet in a dark alley anywhere. Sprint Center would be a difference maker for us. We are likely to get a hot team like Minnesota or the Shockers in Tulsa to earn a shot at KC. I was so pumped to see us with a cushion for a change. Looked dominant for about 7 or 8 minutes.

Fact is, TCU is an also-ran in the toughest conference in America. They do play better than any other team occupying lower half of this year's league standings. Just haven't learned to put 40 minutes together against the top dogs ... three of the top ten teams nationally make it tough for the other seven BXII teams to show the quality of their individual programs.