Behind the Lens: How to survive a court-storming 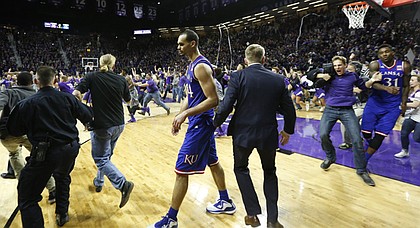 If my calculations are correct, Kansas University men’s basketball opponents are more or less good for about three to four court-stormings a season.

Giving them the benefit of the doubt, I’ll say that over the last 10 years of covering KU men’s basketball, I’ve felt the unwelcome breath of a raucous student section on the back of my neck when the final buzzer sounded on about 30 occasions. In this time, I’ve learned a few things about how to protect myself and how to convey the gravity of the moment without getting trampled.

First off, I think rushing the court is stupid, but that doesn’t change the fact that it still happens and I have to cover it when it does. So, if the game is close and KU is falling behind, usually, just looking into the eyes of that first row of students is enough to tell me that they’re coming and it’s going to be fast.

If it’s a venue that I haven’t been to before, I’ll sometimes ask one of the security guards what the likelihood is that students will rush the floor. On a few occasions, I’ve even asked the students to give me a heads up and politely requested to not run me over.

With a couple of minutes left in the game, I try to minimize the amount of gear that I have on the floor. I limit myself to two camera bodies, a wide-angle lens and a mid-range telephoto. During the timeouts, I’ll start feverishly pulling the plugs on my remote cameras, pack up my floor chair and start eliminating pieces of gear that I won’t need so none of it gets smashed into a thousand pieces when the floodgates open. Usually, I’ll sprint these back to the media room or dish them off to one of our writers nearby.

If a game comes down to one possession and I can see the students crouching as if waiting for a starter’s pistol, this is the point where I will shoot the final play from a standing position. You can’t fully abandon your post, because a KU player may hit a buzzer-beater like Andrew Wiggins did last year against Texas Tech. But when the final score doesn’t favor KU and the buzzer sounds, it’s either get moving or get trampled.

After making some unwise decisions in these situations earlier in my career, I’ve found it’s best to move with the crowd, click off a few frames and then veer off to one side or another.

In 2006, Christian Moody missed a couple of free throws that sent a game at Mizzou Arena into overtime, which the Jayhawks eventually lost 89-86. I remember coming to a halt to compose an image only to be sent hurdling to the floor with my gear flailing as I was overtaken by the rush of students. I think I ended up crawling my way over to the scorer’s table to avoid any more damage.

As intense as the moment seemed, I never thought any of the bumps that sent me to the floor were intentional. In fact, Monday’s court storming, which became national news when a Kansas State student charged into Kansas forward Jamari Traylor, is the only time I can really remember witnessing an aggressive act following a celebration. I guess this then begs the question: Why would an aggressive act occur during a celebration?

The aggressive act happen because KSU fans have a massive inferiority complex and an irrational hatred of KU that leads to them seeing red anytime they see a KU logo.

Nick, you got a great shot of the culprit.

Cool article. Nice to get the perspective of someone else impacted by the court-storming phenomenon. This article seems to offer more evidence that court-storming is something bad waiting to happen.

Interesting perspective with alot of experience over a long time.

As for court storming, I take them as a compliment to the Kansas program. It is significant that over all your years, including all those MO games, the Traylor incident is the lone act of unfavorable aggression.

Thanks Nick for being in "harms way". Sports photography is not usually like war zone photography. But, it seems there are similarities when it comes to preparation and anticipation. Being in the most sheltered place in either genre could prove more personally safe. But, then there would be sacrifices for the moment that is there for the camera to record. Keep your head on a swivel and keep bringing us those shots that only you can provide/

Several things bother me about the KSU court-storming incident and the non-apology apologies. First, I attended the game and it was apparent, with one or two minutes remaining, the students were going to storm the court. The students in the upper levels of Bramlage moved in mass to the lower levels of Bramlage in preparation for court-storming. I thought it was disingenuous of the KSU A.D. to claim they did not have time to protect the K.U. players and coaches.

In addition, the KSU A.D. claimed he was embarrassed by the **** KU chant. However, my daughter, who attends KSU and is a KSU fan sent me a text last year after their victory that she was glad KSU won, but that the KSU fans had no class since they chanted **** KU most of the game. It seems, if the A.D. was truly embarrassed, he would have instructed Coliseum personnel not to play the "Sandstorm" song before the game started or at the very least, during the game, after the crowd started flipping off KU along with chanting the chant again this year. The song was continually played throughout the game.

Regarding the student's apology, after watching the video, it is apparent that the KSU student deliberately sought to blind-side a KU player in the back with his shoulder and elbow. His apology for "disrespecting" KU players rings hollow when he failed to apologize for deliberately attempting to physically target Jamari Traylor.

Those that want to point the finger back at KU students for chanting an obscenity during football kick-offs fail to acknowledge that the KU administration actively discouraged it and tried to drown the obscenity out by increasing the volume on the kick-off music. In addition, none of the football players were physically targeted either verbally or physically when the football field was rushed.

KSU fans definitely have their own special way of storming the court since no KU players were targeted by Temple, Oklahoma St. or West Virginia when they stormed the court. Their behavior was an embarrassment to all Kansans.

I'll say it again. The K-State Athletic Director should resign, and if he is too stupid to go graciously, he should be unceremoniously fired.

This is a really good article and an interesting perspective of court storming. I, for one, have always felt that KSU fans (and I make sure to emphasize "fans" and not "players) have always wanted a rivalry to exist between KSU and KU. After MU left, KSU thought they would be the big team to beat. I can't speak for other people, but I for one have no hatred or ill feelings for the KSU basketball team. I think it is a solid program, and I have respect for their team. It seems to me like KSU fans intentionally try to antagonize KU fans to create a rivalry similar to that of MU.