GAMEDAY BREAKDOWN: A look at Kansas vs. Southeast Missouri State 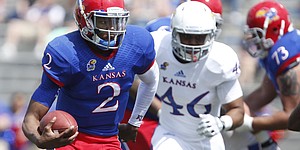 Blue Team quarterback Montell Cozart scrambles in for a touchdown against the White Team during ...

It’s all everybody in crimson and blue wants to see, and its early answer could go a long way toward determining just how excited the fan base gets about this team. We know about sophomore Montell Cozart’s confidence, we’ve heard about his improvement, and we already knew that he had a good mix of physical tools that make him an intriguing candidate to play QB for Kansas. Now he gets to go out and show what he can do. Cozart, who constantly claims he’s a pass-first QB, said this week that he would define a good game against SEMO as 350 passing yards and 50-plus rushing yards. If he plays well enough to produce those numbers, good luck keeping the No. 2 jerseys on the shelves.

It has been four full seasons since the Jayhawks won a season opener by more than 18 points. And it’s not like they’ve played the stiffest competition during that time. With all of the experience, talent, depth and hunger on this year’s roster, it’s time for Kansas to make a statement in the opener on both offense and defense. Doing so will go a long way toward giving this team the confidence it needs to navigate the rest of a tough schedule. And we’re not the only ones who feel that way.

When the KU offense trots onto the field for tonight’s first snap, it will be with the same five offensive linemen who worked with the top unit throughout the spring and preseason camps. As line coach and offensive coordinator John Reagan said, continuity is good anywhere you can get it. So the Jayhawks have that going for them. But there’s more to winning football games and racking up yards than just knowing the guy next to you. Tonight offers a great chance for the KU O-line to dominate, and anything short of that will be cause for concern.

You can’t read too much into the opening-week performance of the SEMO defense because of the opponent. Still, the Redhawks limited Missouri Baptist to 42 rushing yards on 43 attempts and figure to be fired up to face a couple of backs that have yet to play a Div. I game. That makes the performance of KU’s top two rushers all the more important. Avery and Mann are both far better than anything SEMO saw last week, but it’s important that they — along with KU’s offensive line — establish dominance early to take away any confidence Southeast Missouri might be able to gain from a couple of stops early. Avery and Mann will be nervous, but both will be heavily featured in this game and may be all KU needs to ride to victory. 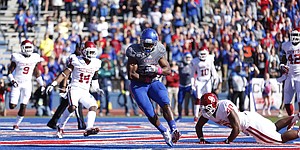 1. How often do you think back to that loss to North Dakota State on opening night 2010?

Not that much. As a red-shirt, I wasn’t out there, but obviously I know what happened. Personally, though, that’s not one that burns as much as some of the ones like last year when we were so close and I had more of a role in those.

2. How does your knee feel?

My knee’s really good. It healed a lot faster than we thought it was gonna heal and I’ve been going out there asking everybody, ‘How do I look, how do I look,’ and everybody says I haven’t lost a step.

3. What’s your favorite memory of a season opener?

It would have to be my senior year of high school (at Denison High in Texas). Literally the first play of the game I had a 64-yard touchdown catch and run. It was crazy. That’s it for sure. I can remember the play and everything – slot left 65.

4. What does opening night mean to you now that you’re a senior and it’s your last one?

It’s exciting. I’m ready to get out there and show people the new team we’ve got, the new mentality and all the work we’ve put in. I get chills thinking about running out and seeing the student section and getting things going. I’m just ready to go.

5. How many family members will you have in the stands at the season opener?

I have 16 tickets I need to get. My mom and her sister. My brother and his wife. My daughter and my fiancee. And two of my cousins and their families. And that’s just the tickets that I’m getting. That doesn’t even include family members who are buying theirs.

KU has gone just 9-39 in the four seasons since Mark Mangino left town, and the fan base has become increasingly more frustrated with each disappointing year. Third-year coach Charlie Weis took next to no momentum into the offseason, and apathy began to be the in thing for KU fans. But as the summer went on, interest in the program climbed. Although today’s game won’t be a sellout, names like Harwell, Heeney, Cozart, Pierson, Avery, Mann and more have the ever hopeful KU fans keeping one eye on Memorial Stadium.

What channel is the game on, on direct tv, or localy in the topeka area

Any chance it will be on AT&T Uverse? Anyone know?

But... have you seen the Central Michigan and Iowa State scores at halftime today? Those two games are going to be a lot tougher than I anticipated. As much as I like this team, I'm thinking it could be a 2 win season.

Very true. It could be 1, 2, 4, 6, 7... who knows? The great thing about college football is how much things change from week to week, game to game, half to half even. I mean, look at ISU... They were punked last week and now lead K-State at the half.

Both of those games are still a ways away and KU has much bigger things to worry about before playing either of those teams.