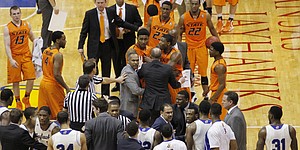 The officials were kept busy trying to keep order on the court the last time Kansas University played Oklahoma State in basketball.

KU’s Jamari Traylor, Joel Embiid and Wayne Selden were assessed technical fouls in the Jayhawks’ 80-78 victory on Jan. 18 in Allen Fieldhouse. OSU’s Markel Brown (2) and Stevie Clark, who has since been dismissed from the team, also were hit with T’s.

The teams will meet again at 8 tonight at Gallagher-Iba Arena.

“I think the motivation is it’s Oklahoma State, and we’ve developed a pretty good rivalry with them in recent memory,” said KU coach Bill Self, whose Jayhawks (22-6, 13-2) can claim the undisputed Big 12 crown with a victory over an OSU (18-10, 6-9) squad currently on the NCAA Tournament bubble.

KU with three games remaining can do no worse than tie for the league crown.

“The last three games (with OSU) have been really close, last-possession-type games, and certainly the opportunity to win a game away from home in front of a national audience on Game Day I think is plenty of motivation in itself,” Self added of a game to be played with ESPN’s “Game Day” crew in town.

The Jayhawks, who led by 19 points in the first half of this year’s first meeting, had to hang on at the end. KU freshman Frank Mason, who hit one of two free throws with 5.4 seconds left to give KU a two-point lead, was able to get a hand on the ball as Le’Bryan Nash failed in his attempt to hoist a two-pointer before the buzzer.

Last year, KU won 68-67, in overtime in Stillwater, avenging an 85-80 loss in Lawrence in which OSU’s Marcus Smart did a backflip after the final horn sounded.

“We are rivals, both tough teams. We are not soft,” said senior center Tarik Black, who had eight points and two boards in the first meeting. Naadir Tharpe led the Jayhawks with 21 points and six assists against six turnovers, while Embiid came close to a triple-double with 13 points, 11 rebounds and eight blocks. Phil Forte, who has moved into the starting lineup, led OSU with 23 points off 7-of-10 three-point shooting.

“He’s obviously to me one reason why they are playing better, because he’s played well and plays better whenever Marcus is in the game with him,” Self said of the Marcus High (Flower Mound, Texas) teammate of Smart. “They are kind of like the twins, Marcus and Markieff (Morris), looking for each other. I think that he is certainly as good a sixth man as there is in the country coming off the bench and giving energy-making shots.”

In the past two games — wins over Texas Tech and at TCU that followed a seven-game losing streak (three losses during a Smart suspension) — the 5-foot-11 Forte has averaged 21.5 points a game. Smart has averaged 16.5 points, 8.5 assists, 5.5 rebounds and 5.5 steals.

“Yeah, they’re different,” Self said of the Cowboys with Smart on the floor. “I know that I was a guy probably that sang his praises as much as anybody since he’s been at OSU because I got to know him through the recruiting process. He’s good. He can impact the game and not score. He’s one of the few guys out there that can control it. His defensive anticipation is probably as good as anybody that we’ll ever play against, not just this year. He’s a good player, and obviously he and their team have been through a lot here of late. He’s spinning it into a positive.”

The much-anticipated Smart-Andrew Wiggins showdown didn’t materialize in that first meeting. Smart scored 16 points off 3-of-14 shooting (10-for-10 from line with 10 rebounds) and Wiggins three points off 1-of-5 shooting.

“He (Embiid) made some nice blocks, and he’s got great timing,” Ford told the AP. “You know he’s in there.”

Just 3-7 since the last meeting with KU (the Jayhawks are 9-2 in that span), OSU will play KU tonight, meet Kansas State on Monday and close Saturday at Iowa State.

“At this point of the season, all of the games are big,” Ford told the Tulsa World, acknowledging, “There’s some excitement around this game.”

There could be a lot of excitement for KU if the Jayhawks claim a victory and the outright league title.

The Big 12 title trophy figures to be presented to KU’s players in the locker room with the T-shirts and hats broken out of the boxes if the Jayhawks win. Another way KU could wrap up the undisputed crowd today is if both second-place Texas and Iowa State lose. Texas plays at Oklahoma and Iowa State is at Kansas State.

Semifinalist: Wiggins has been named one of 10 semifinalists for the 2014 Naismith Trophy, the Atlanta Tipoff Club announced Friday. Four finalists will be announced March 23.

Recruiting: Justin Simon, a 6-4 junior combo guard from Temecula Valley (Calif.) High, tells Rivals.com he has received a scholarship offer from KU. He’s ranked No. 80 in the Class of 2015.

Does Kansas need to win this game?

I'm thinking yes. If we win, I think it'll indicate how far we've come in terms of toughness.

Well, today is a true test for both questions.

Getting this close to tournament time, I would hope that we're ready to beat older and physical teams.

Embiid will have another big game, there is no way Oklahoma State Can Stop Him

Wiggins will have a better game this time

Selden needs to show up again

A couple of nits... I believe Mason blocked a 3 pt attempt by Nash, who then recovered the ball inside the line and tossed up a second (2pt) shot after time expired. If Frank had fouled him , it would have given Nash a chance to win the game at the free throw line.

Second nit is the word should be "crown" not "crowd", as in: KU will win the crown outright if they beat OSU.

Sorry, it was the second time the intended word of "crown" was misplaced by "crowd."

"Another way KU could wrap up the undisputed crowd today is if both second-place Texas and Iowa State lose."

KU has already wrapped up the undisputed crowd as in, the "Best (and Loudest) Place to watch college basketball!"

Has Marcus Smart perfected the flop enough to get another invisible flagrant call to go his way?

Even better than the 'elbow' in Lawrence?

Don't be surprised if we lose this one...OSU is a cornered animal, playing for NCAA stakes. Their season is already in tournament mode right now because one more loss likely means they are out. On the other hand, this game means very little for us other than pride.

I hope it means a lot more than that. We are still in the fight for a #1 seed, momentum in the final Conference games and the outright Big 12 Championship.

I doubt many 7 loss teams have been a #1 seed (or 6 for that matter) so a loss will end just about any chance of that plus it's a statement game against a rival. We can effectively end their season tonight unless they win the Con. Tournament.

I agree with every point except the last and that may be just because of wishful thinking on my part.

When do we get in tournament mode? If we wait until the Big XII it may be too late, especially if we take an early exit. We have been slow learners, at times, because of our youth so I think we need to badass it in every game from Texas on. We can expand our depth and create fear in our opponents.

John, I agree completely. This game worries me. OSU is the one Big 12 team that can match our talent, it's on their home floor, and they're fighting for their lives. Plus, with Smart's suspension, not only does he have a lot to prove, but he's fresher than most of out players. We need to play with the intensity that we did against Texas to even stay close.

Pressure Smart, pound the middle, guard the hell out of Forte, fly home with the trophy, pray that Alexander is eligible!!

OSU will be sky-high for this game. They look a lot better after Smart spent some time in the cooler. I figure the Cowboys will jump out to a strong lead and fight to maintain it. Embiid is not as much a factor since he has not fully recovered from his injuries. Our perimeter defense will be tested severely.

OSU by a dozen.

The rivalry is KU vs. Marcus Smart. No one would have thought that OSU would be a bubble team at this point, but without Smart, OSU is a bottom of the pack team.

Look for a Street Brawl tonight, lead by Marcus Smart, as he tries to revive their NCAA bid.
Expect a lot of FLOPS and expect the Zebras to get involved, this is going to be the toughest game of the year.

When Smart was out, OSU lost 4. Without him, they have nobody else. Take him out and we can win.

Syracuse will lose today at Virginia. They are ranked 4 and we are 5. A win here tonight will move us to a #1 seed and then wins over TT and WW will lock that #1 seed.

I am guessing Bill Self does not need any help. He knows what to do!

My take Is: shut downn Smart (Selden) and Forte (Wiggins) and the game will be over. I know that is easy said than done.

Our team has matured to be powerhouse away from home when it really matters, and I believe they will go through March Madness with passion and determination to reach all their goals until the Final match.

Remember, we have two seniors, plus Wiggins, likely Embiid snd maybe Selden who are not returning next year. I think we can be assured they are not thinking to loose ANY games no matter who and where their matches are played.

We all know OSU is more than motivated and in survivor mode, but their last two wins were over TT (@ home) and TCU (away).

If we show up, nobody beats us!

Mari has one badazz south side look in that pix. F with me and I'll drop u with the rest of the trash in the gutter.

Jo looks like he's protecting his goats from a lion.

why are people on here asking if we need to win if we can win. its never acceptable to lose!

After putting in some serious mental gymnastics analyzing today’s game, I can’t think of one good reason Oklahoma State can to win tonight’s game.

Kansas has absolutely no pressure to win. I truly believe our players will play loose, relaxed and hard. Meaning if Oklahoma State attempts to play mental gams, it won't work.

All the pressure is on Oklahoma State, folks that’s not good news for a bunch of hot heads.

Congrats to Kansas, KU will celebrate a great win tonight.

Due to the bad weather in Stillwater, I've got two (2) tickets for tonights game, no charge. If anyone can use them, send me a message. I will email a paper ticket anywhere.

How freaking sweet is that? Nice, nice, nice. I only live 2 hours away but can't go. Suzi, you walk the walk.

sure...send me a message with your email. I'll send them to you.

Kent....I sent you a message with my email. Let me know if you know anyone that wants these tickets. I can email them anywhere. Really would rather give the tickets to Jayhawkers rather than random Cowpolks in Stillwater.