Notebook: Embiid's succes no surprise to Self 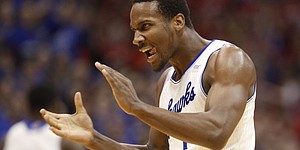 Images from Saturday's game between the Jayhawks and Cowboys at Allen Fieldhouse.

“We are rivals, both tough teams. We are not soft,” Black said after a game in which KU’s Jamari Traylor, Joel Embiid and Wayne Selden were given T's, as well as Oklahoma State’s Markel Brown (2) and Stevie Clark.

“Stuff is going to happen, especially two teams like that in a game as important as this. We never expect to be perfect. It comes with being a tough team,” Black added.

No punches were thrown during several skirmishes. Selden did clip OSU’s Marcus Smart with an inadvertent elbow as the two chased a ball headed out of bounds in the second half.

“They did a lot of talking and shoving and stuff like that,” KU’s Naadir Tharpe said. “We came back and just attacked them and that’s what we needed to do.”

Coach Bill Self’s take: “It was guys making plays that weren’t smart, especially from our standpoint.”

Self knows why emotions ran high, though.

“Marcus Smart doing a backflip (after last year’s OSU win in Allen), that was our fault (for losing). It wasn’t his fault, but the media was able to play on that,” Self said. “I think because the media played on it, I think both teams were tuned up pretty good today, which is good, positive. We need that.”

Joel Embiid received a T for a third straight game.

“I mean, I just have to keep my cool and stay calm — and not have any dumb fouls anymore,” Embiid said.

“I told Joel as soon as he stepped foot on campus, ‘You’re going to be the No. 1 pick (in NBA Draft). Now it may not be this year but you will be a No. 1 pick if you come out and the time is right.’ I’m not saying he will be this year. When he comes out, if he stays and the times it right, he could be No. 1 pick in the draft,” Self said. “I don’t think it (success) should come as a surprise to him because he’s been told all along he’s capable of doing this.”

Double turnover: A big play took place when OSU’s Marcus Smart stole the ball from Tharpe, and Tharpe stole it right back with KU up, 59-56. Tharpe followed the sequence by hitting a three and stretching KU’s lead to six with 10 minutes left.

“That was big because I don’t like getting the ball stolen from me at all, especially off of the dribble. It kind of hit off my leg and then he ripped it from me, but I knew he didn’t have a chance to run and I was still right there so I just tried to get a jump ball and rip it back away and luckily I was able to get it back and we came out with a basket,” Tharpe said as KU avoided completely squandering a game-high lead of 19 points.

Broken thumb: KU sophomore Evan Manning broke his right thumb at practice this week and will be out three weeks, Self stated.

No foul: Self said he didn’t consider fouling OSU on its final possession. KU had four team fouls as Le’Bryan Nash raced down court with five seconds left and OSU down by two. Self said the Jayhawks hadn’t practiced such a situation, thus wouldn’t do that in a game until it had been addressed at practice.

Self had a feeling of deja vu during the game: “It’s an eerie feeling, but that’s the same game we had against Michigan to end our season last year where you play not to lose, the other team is making everything they throw up there,” Self said. “It’s a good teaching moment for us.”

Greene does well: Freshman Brannen Greene scored five points the first half while working seven minutes. He didn’t play the second half. “I just try to come bring energy. I fed off my teammates,” Greene said. “I thought they started great. Tarik (Black, eight points first half) and those guys bringing energy. I felt it only right I do the same thing.”

This, that: The Jayhawks are now 4-2 against ranked opponents in 2013-14, and 3-0 against top-10 foes (No. 4 Duke; No. 8 Iowa State, No. 9 OSU). ... Oklahoma State entered Saturday’s contest with a top-10 mark in shooting percentage, but was held to a season-low 39.4 percent from the field. OSU’s previous low was 40.4 percent at K-State. ... KU shot 55.8 percent and improved to 10-1 when shooting better than 50 percent. ... Phil Forte sank seven three pointers, the most by a KU opponent this season. It was also his career-high. The seven makes marked the second consecutive year that a OSU player has drained that many, following Markel Brown’s performance from last season ... With 1:56 left in the first half, freshman guard Wayne Selden drained his first three-pointer to extend his streak to 11-straight games with at least one three-point make.

People are comparing Embiid to Anthony Davis already, and it is only his third year playing the game. Anthony Davis was Point Guard that no one wanted he grew 8 inches and became a phenom. But I think Joel Embiid is better than Anthony Davis, because Embiid better foot work and his frame is bigger and he still has yet to fill out. Anthony Davis is nice and a future ALL-STAR for sure. But Embiid ceiling seems to be enormous because he improves with every game. I think we are looking at a future 3 or 4 time NBA champion. Once Embiid finds his ceiling and fills out and he looks like he is going to be huge with his footwork, we could be looking at the next Tim Ducan

Here is a hypothetical question

With your number 1 pick in draft would you take

Would you rather take

I have to call Bill Self out on this one. You have to foul on that last play. We had 2 free fouls to give. Maybe could've run the clock down to a second or less with them still inbounding beyond half court. We don't need to practice fouling. We are quite good at it. We were very lucky they didn't make another 3, or get 3 free throws.

Maybe there is a reason he gets paid millions and you blog.

So Self is infallible because he is paid well? Wish it worked that way in government.

much better than the private sector, plus they have great benefits...and they can not be fired.

Govt is people who cant make it in pvt. sector. Also think of the phrase: "cushy govt job with great benefits". We had a chance to elect a proven performer in the pvt sector, but couldnt git-er-done. Country doesnt know what it wants because it is too diverse, and people's agendas & wants differ.

What if he gets called for an intentional foul Mike? Then it's 2 and the ball.

Michael - while I agree the correct play there is to foul (especially with fouls to give), you do need to practice it just a little. If for no other reason than you don't want to end up catching someone in a shooting motion behind the arc.

It's kind of ridiculous to me that we haven't practiced that at all.

As OSU was charging back, I was having flashbacks to the 2003 Arizona game where we led by 20 and lost by 17 in a game televised nationally on CBS. So glad things didn't turn out the same way today.

Embiid may become the best there ever was. Also, his name autocorrects to "Embodied." That's right.

We were outplayed by 15 pts in the 2nd half. Was Wiggins injured? I know he wasn't having much offensive production but he seemed to be doing well defensively.

I would not want to play Kansas once we learn how to put a full 40 min. of basketball. It was also encouraging that even without our best player having his game on, we could still beat a top 10 team.

Wiggins and Ellis were both slow and soft on D early in the 2nd half, not getting out to shooters at the 3, not getting hands up on shooters, not getting in defensive rebounding position, etc and I believe that is why Self sat them for the rest of the game. Wiggins must get stronger with the ball in his handle, he is still getting stripped way too easily, and that is neutralizing his first step quickness advantage.

I don't know about Joel being a 3-4 time NBA Champion, but I can definitely see him as a perrenial All-Star. NBA championships are so dependant upon the front office and surrounding personnel. But, our OTHER JoJo (White), had a pretty good run of Championships in his time so maybe Joel will be surrounded by fellow superstars on his team, as well.

Correction: "No punches were thrown during several skirmishes. Selden did clip OSU’s Marcus Smart with an inadvertent elbow as the two chased a ball headed out of bounds in the second half."
First, they weren't chasing a ball at all as Selden was standing still and swerving to keep the ball away from Smart. Plus, the replay clearly shows about an inch of daylight between Selden's elbow and Smart's face.

Smart is overhyped. He especially hurts his team when they are struggling. For example, when they were making their comeback, he wud throw up ill-advised shots here and there. It was obvious he didnt have it going, but he is still their "man" so he is going to drive out of control or jack shots up when he should be finding the guys with the hot hand. I cant stand him and he is out of control most of the time, except of course when he's not flopping around on the floor because someone hand checked him or breathed hard in his direction.

No punches were thrown during several skirmishes. Selden did clip OSU’s Marcus Smart with an inadvertent elbow as the two chased a ball headed out of bounds in the second half.

This did not happen. Repeated replays showed Smart flopped after a whiff on the elbow. You, as a journalist, should report what happened, not what the ignorant TV announcers said.

Embiid is unbelievable but then again so is Andrew Wiggins.

Can you imagine in May some NBA team will have to choose between Joel or Andrew as their number #1 choice.

I'm glad I don't have to make that choice but I am thrilled their both on our team.