Behind the Lens: 'Jayhawk Decade'

Looking through images I’ve made during 359 games has taught me a lesson about being somewhat selective while shooting, but I also learned a little about the importance of meticulous archiving practices.

If I had known that I’d be going through a quarter of a million Kansas University basketball images, I might have asked my younger self and some of my current and former colleagues to go a little easier on the shutter button.

Today, we released a photo book, “Jayhawk Decade.” It’s a compilation of our best images and best quotes along with commentary about the defining moments, best games and beloved personalities from the Bill Self era. By no coincidence, it stands as the winningest ten-year stretch in KU basketball history. We did the math. 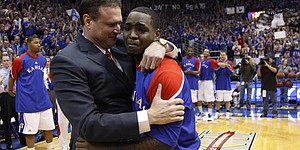 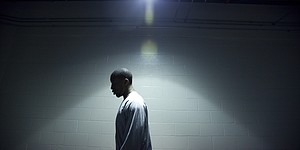 Kansas forward Thomas Robinson makes his way through the hallways of CenturyLink Center as the ... 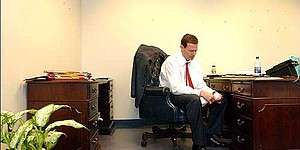 Greeted by an empty desk and blank walls, Bill Self opens a piece of mail ...

Every photographer carries a special relationship with his or her photos.

Something about the moment, the subject matter or an indescribable feeling compels one to compose, focus and shoot. In the case of documenting a team with the most devoted of fans, certain images go further in establishing a great human connection than any dunk ever could.

Nobody beat their chest harder or stared down an opponent with more intensity than Sherron Collins. Never before have I seen a player feed off the electricity of the big moment and being the go-to guy for his team. On his senior night I saw Collins walk out to the weighty applause of the fieldhouse crowd and then, with tears in his eyes and overcome with emotion, watched him comforted by Bill Self. Photo Chief Mike Yoder also has a nice shot of the senior point guard wrapped up in the arms of his buddy Cole Aldrich before leaving the floor for the final time. To me, the images are a powerful testament to the love a coach has for a strong-willed player, the bond between two team leaders, but also the irreplaceable warmth of playing before 16,300 fans who knew him by his first name.

Another favorite focuses on Thomas Robinson, a player with tremendous athletic ability, who emerged from being the guy who gave the Morris brothers a break one season to a national player-of-the-year contender the next, all the while dealing with the enormous personal loss following the death of his mother. While covering an NCAA practice in Omaha I saw him walking under the hallway lights to the court, and I remember thinking that he looked like a guy with the weight of the world on his back.

Finally, an image by Thad Allender early in the book is simply a shot of Bill Self reading through mail at his desk on the day he moved into his office. Surrounding him are blank walls with little divots where various photographs and pieces of memorabilia from the Roy Williams era had hung. One could argue that many people were shaky on his hiring during those first few years, especially after replacing a four-time Final Four coach like Williams. I’m not sure what the current situation would look like if they had hired a different guy. But I seriously doubt that we would be putting out a book of images on the winningest decade in KU basketball history.

I might have to send my wife the link to this story as Christmas approaches.

This is awesome Nick. Just those 3 pictures highlighted here are amazing. Can't wait to see the full volume of work.

I wonder how this 10 year stretch compares to any 10 year stretch in the history of college basketball? UCLA's run I'm sure has a higher win % during a 10 year strectch in there for them, but has any team exceeded our 10 year win total?

I have to think 30 win season just weren't as common in the 70s so it would seem like we have a shot at total wins for any decade.

This is probably already well known and I'm just too lazy to Google it. : )

Thanks! It's been a lot of fun revisiting all of these images and going back through the games. Sure you're right about UCLA, but I'll have to consult Jesse Newell or Gary Bedore on who has the most wins in the last decade. I'm betting it comes down to KU, Duke and Michigan State with an edge to KU.

Great piece, Nick. And I believe I speak for most when I say that you are an invaluable asset to the LJWorld. You have incredible instincts and a natural feel of an artist that cannot be taught. We are all very lucky to have you to capture what is often much more than a thousand words a click.

Keep up the great work, because up ahead of you is 10 more years of the best basketball in KU history.

Probably off topic but can I watch late night on WOW?

Thanks for the nice words. Really happy with the way it turned out but I couldn't have pulled this thing together without the stellar work of my current and former JW staffers.

Pre ordered the book on Monday. Can't wait to put it on my coffee table. That Sherron senior night game against KSU was also my last game to attend as a student at AFH and it was definitely electric in there as both teams were in the top 5 at the time and the moment when Cole and Sherron hugged as they were being subbed out was definitely the highlight of the night. Also, when Sherron was shown on the video screen crying as he left the floor was just one of those moments that can't really be described. Nick, you and the other photographers do an amazing job and have captured some incredible images over the years.

My wife will tell you I was ecstatic when Kansas hired Bill Self because I had watched what he did at Illinois and watched how he out-coached Roy Williams in a head-to-head game. My wife was less convinced. I'm pleased to see that, for once, my own judgment was spot on!

If there ever was a sports book that I would put on my coffee table, this is it. Pretty good article too btw. Thanks Nick!

Probably won't be commenting after today due to the Facebook requirement, but--while I still can--I did want to say that I'm constantly impressed by your photos. Great work!