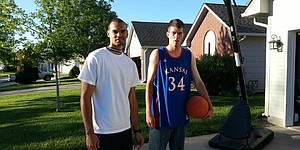 Perry Ellis was a surprise visitor on Sunday at the home of Special Olympian Tony ...

Special to the Journal-World

The young man at the door of her home in the Wichita suburb of Bel Aire, wondered if Tony, 27, could come out to shoot hoops.

But once the young man let her know who also wanted to shoot hoops with Tony, the food went cold.

Kansas University sophomore Perry Ellis, Tony’s favorite player, was in the neighborhood visiting friends. When he heard about the man who forever was shooting hoops on his driveway wearing a Kansas No. 34 jersey, he wanted to meet him before driving back to Lawrence.

“I had just gotten Tony a basketball goal two weeks ago for his birthday,” Barb said of her 6-foot-9 son. “I told him ‘Do not hang and dunk on it. Just don’t do it. You can get hurt. You can break the rim.’ He didn’t have it 24 hours and of course he hung on it and snapped the rim off. We were able to fix it and I told him it was the last warning.”

Tony heeded his mother’s warning and thanks to that, he was able to shoot hoops with his hero.

“You can’t even imagine what that did for Tony,” Barb said. “Tony doesn’t show a lot of emotion, but he just lit up. It really, really did make his day.”

The Parkers, mother and son, lived in Lawrence from 2007 to 2012, when Barb decided to move to Wichita, where she had family members who could lend support to caring for Tony, who has intellectual disabilities.

Barb landed a job at Wichita Heights High, Ellis’ alma mater. She said she kept hearing nice things — some of the same qualities she sees in her son — about Ellis during her tour of the school.

“I told them I couldn’t accept this job until I got a picture with Perry Ellis,” she said, laughing. “When he came to our house I asked him if he remembered the crazy teacher who wanted a picture taken with him, and told him that was me.”

Ellis’ visit to the Parker driveway no doubt will motivate Tony to work harder on his game. As for Barb’s main motivator, nothing has changed there.

“Tony is loved by all,” Barb said. “He kind of has that heart of gold. He’s just a real caring person, always been that way. He’s the reason I’m a teacher. He is my inspiration.”

When Barb took night classes in Garden City toward her associate’s degree, Tony sat next to her. Ditto for her classes toward a bachelor’s degree from Ottawa University. Wearing headphones, Tony also accompanied his mom for the first of two years of classes toward a master’s from KU.

Mother and son also share a passion for KU basketball, but Ellis’ jersey isn’t the only one Tony owns. He also has been known to wear a San Antonio Spurs No. 9 jersey, worn by his namesake: All-Star point guard Tony Parker.

Geat day for both young men! This Tony Parker will be one of two that PE will eventually share a court with. The other one probably doesn't hang on the rim as much though!

Nice tag. I have had that same one in Kansas for 20 some years!

Very cool story. Thanks for sharing it with us.

Proud to have Ellis as a member of the Jayhawk family!

You cannot teach class, you either have it or you don't. This young fella has it, and I am not afraid to say this story has made me want to be a better man. Thank you Perry!

Perry is such a class act. What a great experience for young Mr. Parker!

I have a 25 year old son with Asperger's Syndrome, a high-functioning form of autism. After reading this story, Perry Ellis is now my favorite player too.

I love Ellis' compassion for others. I just hope it doesn't extend to his competitors in the paint. A little Dr. Ellis/Mr. Hyde would be great!

No fanfare, no announcements that he was going to do this, Perry just took it on himself to go and visit with this young fan and brighten his day. What a terrific young man Perry is, definitely proud that he is representing KU.

Made my day to read this! What a great young man!

Good stuff, Tom. And Perry! I love these kinds of stories...

Who was the young man with Perry? And where was Perry when the other guy rang the doorbell?

Nonetheless, great story. Thanks for sharing.

Thanks, Tom ~ terrific piece on three very special human beings. Tony's mom, Barb, who obviously has been a wonderfully supportive mother for Tony, while, also achieving significant ~ and challenging educational goals.
Tony, himself, for meeting the daily challenges that he faces, as well as being a supportive son who also has made his contributions which assisted his mother's educational accomplishments ~ and, also importantly ~ for his love of basketball and becoming an excellent player.
And, of course, Perry Ellis. From what we know of this young man ~ this story is so consistent with the kind of person he has always been. Not only an exceptionally talented basketball player ~ but even more importantly, a very special person that not only his family and friends are immensely proud of ~ but we, as members of his 'Jayhawk family', can also share in that pride. Congratulations, Perry ~ well done.

So Tony tore the rim off of what appears to be a regulation hoop, and also looks about as tall as Perry in this photo. Maybe Perry was just looking for a worthy opponent to practice his post moves with while he was home!

In all seriousness, you make us proud, Perry. These are the moments you will carry with you when your playing days are over. Way to use your notoriety to make an impact on someone's life!

A story like this makes you REALLY want to see PE break out and have an All-American-type season. It means so much more when it happens for someone who deserves it for the type of person he is as well as the type of player he is.

Is it possible to like Perry anymore? What a great young man.

What a classy thing to do! My hat is off to Perry Ellis.

Thank you Perry. These are the things real men do!!

I think that if Ellis stays four years, he will be one of the greats to put on a Jayhawk uniform. You can't give us too much Perry Ellis.

A big thank you to Tom for writing this story and all of the positive responses. I also have to give KU and all of the athletes for their endless support of the special needs population in Lawrence; clinics and other events they put on for the kids/adults Doulgas County Special Olympics. We REALLY miss that!!!!

And to all parents of special needs children: Despite what specialists predicted for Tony's future as a successful, functioning member of society as deemed byt the world's standards, he has exceeded many goals and most importantly touched more lives in his 27 years than most people do that live to an old age. Don't believe everything you are told and never, ever lose hope for your child!!