More than 40 years have passed since Gale Sayers carried a football for the Chicago Bears and made the guys chasing him look like a bunch of Keystone Cops, but thanks to his remarkable highlight reel he remains fresh in the minds of football fans, even some born way after he retired.

Kansas University safety Cassius Sendish, a junior college transfer likely to start for the Jayhawks, looked back on his days of youth football and it didn’t take him long to mention the name of the Kansas great whom Sendish never has met. 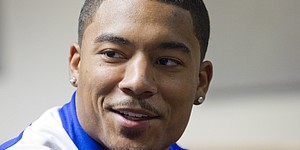 “When I first started playing, we had a division called ankle-biters, 50 pounds and under, and I played offensive line when I was 5 and 6,” Sendish said. “I was one of the smaller guys and I was on the offensive line. I was just scrappy.”

At 7, he moved up a division and was used at another position on the road to becoming a defensive back.

Sendish said he did once successfully mimic Sayers on a memorable touchdown run.

Sendish said he still has a VHS tape of his run that reminds him of the Bears’ great.

“When I get bored at home I’ll just watch that old tape,” Sendish said.

No sports highlight tapes can quite match those of great running backs. Not even dunks.

“There is something special about them,” Sendish agreed. “They don’t even need music. Even if you have the sound down you can hear the symphony playing when they’re running.”

He listed the highlight collections shared by his father, Andras Sendish, of runs from Sayers, Walter Payton and Earl Campbell as his favorites.

Listed at 6-foot, 187 pounds at Kansas, which does not inflate its heights and weights in football since the arrival of Charlie Weis as head coach, Sendish said he graduated high school standing 5-10 and weighing 160 pounds. The junior from Waldorf, Md. said he has gained weight, speed and an appreciation that taking care of things in the classroom is a prerequisite for playing football.

“Going to junior college was the best thing that happened for me physically and mentally,” Sendish said. “My last two semesters in junior college I had a 4.0 and a 3.8 GPA.”

Sendish enrolled at KU for the spring semester and impressed coach Charlie Weis during spring practices with his performance and demeanor so much so that he was chosen as one of four Jayhawks (with Jake Heaps, Ben Heeney, James Sims) to attend Big 12 Media Day.

Dexter Linton is KU’s most experienced returning safety, but will face stiff competition in trying to get on the field from Sendish, juco transfer Isaiah Johnson and red-shirt freshmen Greg Allen and Tevin Shaw. If a need arises at cornerback, Sendish could play there instead.

Every one of them will do their best to stay off the highlight tapes of Big 12 running backs and receivers.

Discussion about the Kansas Comet will do that to you. He was very special.

The secondary is where KU will win/lose games. Coach em', Campo. RCJ

Disagree, the lines will make the difference. QB cant throw when he's flat on his back.

Don't forget about special teams, which has been terrible ever since Mangino left.

DLine is more important than secondary. A team can have very good DB's, but they can't be expected to cover WR's for 8+ seconds because the DLine can't get any pressure on the QB. KU has had some good DB's the past few years, but because the DLine has been so awful, it has made KU's secondary look worse than it really has been.

I completely agree. There wasn't a game where every opposing quarterback had all the time in the world to wait for his receivers to uncover. We definitely need the secondary to step up though and allow the D-Line a little time to cause some havoc.

No doubt about it. Chris Harris had to be the most frustrated Jayhawk to play in a while. Such a great talent, but like you said...a DB can only cover for so long.

If you can't defend man to man, then it doesn't matter how good the defensive line is; The QBs in the big 12 get the ball out quick.

I'm surprised someone still has a vhs player...wonder if he has a beta max as well.

Opinion: There need to be more football articles. I love basketball just as much as the next guy, but for the love of God and country, please give us more football. I would love to know what is going on with recruiting, how guys are developing, a guess at the depth chart...anything. If you get real desperate, write an article about Johnny Football.

KU needs the most help at quarter back and special teams, in my opinion.

I agree. It could be the chicken-egg question. They probably don't write fb articles because the readers don't want fb articles. They want bb articles, even though the fb team involves 100 student athletes and coaches, compared to the bb team with 20. Apparently the readers want to know how many pts. a former bb player scored in a summer league bb game. This is one reader who would enjoy a daily fb article.

Actually it is usually more an issue of lack of access to players and coaches that limit the number of stories available to the writers to write. The summer is a dead period because the media are restricted from contacting players so they are left to opinions and dusting off old stories they saved away for this period.

Fear not though, all is not lost as once we have Big 12 Media Day this week and the team reports for camp in early Aug, we'll see a big uptick in substantive stories about the team and their opponents this season. Until then, I guess we should be thankful that there are no more summer league games for them to recap...

I am kinda hoping the silence = secrecy which might translate to wins. But, some human interest stories about the players would be nice.

I belong to JayHawkSlant, a subscription service, and I get my recruiting and football fixes there. But there's a lot here from Tait, and it's kind a slow now anyway. The coaches have been away on vacation and are just coming home, I believe.

Any 7 year old who watched tapes of Gale Sayers before his games is one special dude.

I recall last year the secondary couldn't cover, was slow and often beat so I think it's as important as the line. They go hand in hand because pressure is great unless people are open everywhere. Either way we've made upgrades in both areas, but now it's time to make it happen. I am excited for football because we will be better, more competitive and I believe we will be more fun to watch.

To us Jayhawks, he is the Kansas Comet. Here in Omaha, he's often referred to as "the one that go away!" Wish I'd got to see him play live...a few years before my time!

I know that I'm very biased, but in my heart I honestly feel that KU has been blessed to have the greatest running back that ever lived, as well as the greatest basketball player of all time.

Gale Sayers and Wilt Chamberlain - how fricking awesome is that?

If you were looking at stats on a sheet of paper ( anybody remember paper? ), he would probably only be in the top 10. I haven't checked, so that may be way off.

But anyone who got to see him play in person KNEW that he was a once in a lifetime kind of player. It was just terrible to see his career cut short by injury.

I did get to see him play live and I'll never forget the Nebraska game we won where he started and ended the game with long runs for touchdowns. Had some friends who got there late and left early so missed all the fireworks. They were really bummed! Those were great days for KU football!

Uh, that was Oklahoma.

yes, that was Oklahoma in Lawrence and I was there too.

Yes it was OU. Sayers scored one of the touchdowns on the opening kick off. Bob Skahan scored the second touchdown and Mike Johnson scored the 2 point conversion on a reverse from Sayers with the clock expired.

And I was caught in a tidal wave of students flowing down onto the field from the northeast corner! Those of us there will never forget it.

I love his observation that you can hear the music even with the volume down when watching a great run. An artist at heart. Can't wait to see him pick 6.

It was Oklahoma. Sayers ran for touchdown at end of game. He was so worn out that he was
not in for 2-point conversion. A reverse that scored and KU won 15-14. Oklahoma won all of the game except the first and last minutes.

You are wrong. Bob Skahan scored the second touchdown, not Sayers. Also Sayers handed off to Mike Johnson for the winning 2 point conversion. A brilliant call as OU sent everyone after Sayers, who then handed it back to Johnson on the reverse.

I was caught in a tidal wave of students flowing down onto the field. One of my most exciting experiences as a fan!

phoggy..n got it right! KU can't 'cover'; they don't teach it right.

Perhaps the best 2012/13 example was in IL vs Baylor in a bowl game, played in TX. Perhaps 3rd qtr, IL # 12 (maybe) covered Baylor's best receiver. At the end of the play there was an official delay -- discussing a penalty. The Baylor guy was called for offensive pass interference. They lost the down and 10 yards as well! The only way IL #12 could have played it better would have been an interception. KU gives the offense 7-9 yds about every pass play; never call man to man. No Defensive player can function that way.

Here is the link to the play mentioned in the Gale Sayers article.....http://www.youtube.com/watch?v=jkMUXadwCos

this clip shows the Chicago owner (Halas?) saying that Lamar Hunt also drafted Sayers -- I guess for the AFL?

also chock full of Gale footage. what a cutback ability!