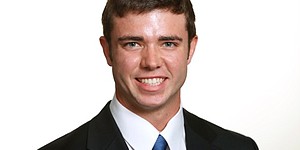 Football coaches who head teams that have no problem amassing yards but find themselves one foot short of a complete offense tend to scour soccer fields for help. Listen to Kansas University walk-on kicker Austin Barone and see if you don’t think coaches should also be scouting local golf courses.

Barone attended St. John’s grade school in Lawrence and was a Bishop Seabury Academy student through his freshman year. He then moved in with his grandparents in Pittsburg for his final three years of high school at St. Mary’s Colgan. He placed fifth in the 1A state golf tournament as a freshman, eighth and ninth in 2A as a sophomore and junior and seventh in 3A as a senior. He also is one of six students vying to become KU’s field-goal kicker in the fall. He said he thinks kicking a football with his foot and striking a golf ball with a club are “the exact same.”

“In high school, there were days where I would get a golf lesson and then go out and kick great the next day because theoretically the swing is the exact same,” he said. “You want to swing up and through the ball. You don’t want to be down and around because you might hit a duck hook into the pond.”

(Has he seen me play No. 11 at Lawrence Country Club? Was he making fun of me?)

“It’s the exact same,” he said of the two athletic moves. “I mean, it really is. I think golf really helps me. A lot of times if I’m struggling, I might go to the golf course. It’s great because I can relax, and I can also think about kicking in a non-kicking manner, so that I’m not overthinking.”

In two seasons kicking for St. Mary’s Colgan, Barone made 17 of 19 field goals. A red-shirt freshman, Barone never missed a field-goal on turf, and his longest came from 43 yards. He’s a darkhorse in a crowded race that includes senior Ron Doherty, sophomore Matthew Wyman and newcomers Eric Kahn, Michael Mesh and Trevor Pardula.

If Las Vegas offered odds, it likely would have Mesh as the slight favorite over Pardula for field-goal duties, Pardula winning the punting job, and Pardula and Kahn battling it out for kickoff duties. But the favorite doesn’t always win.

“When you look at other guys on film you can see, ‘OK, when this guy finishes, his skip is straight at his target, whereas mine is a little bit to the left.’ If you think about it, a kick can go wrong with this much (fingers the eye of a needle apart) going wrong,” Barone said. “His follow-through is straight at his target and in a more controlled manner. It’s going to help with (accuracy) and power. If you think about it, if all your power is going toward your target, it’s sent through the ball. If it’s maybe going to the left, your power is not sent through the ball.”

The golf ball or the football.

It will be fun to track the competition.

The last three years our kickers have seemed to get their field goal and punting duties mixed up with their golf game. Hopefully, those issues will be "ironed" out this year.

Beginning today, users of KUsports.com occasionally will be asked to answer a survey question or two to gain full access to a story."

I guess by "occasionally" the LJW means "all the time, on every single sports story".

Why didn't they just tell us the truth?

They have suspended a lot of accounts as well...what to wonder if I am a developer or drink lots of coffee?

The opt out button in Google is the one link that doesn't work on this site as well.

Hey Jross — If you are seeing subsequent surveys within the same 24 hours period after you've already answered a survey, this a definitely a malfunction. If you send me an email at jnewell@ljworld.com with the browsers you use at home and work, I'll be sure to pass it along so we can try to diagnose the issue.

I've yet to encounter a survey.

Are you having to answer a question on every story? I just have to deal with it on the very first story of the day, so it doesn't bother me that much.

If you use more than one computer it will as well. Which means it isn't anonymous.

He is Adidas not Nike.

And here all this time I thought I was crazy, believing Marc D'Errico could have helped us against Syracuse in '03...

Dude I'm still laughing! I was thinking the same thing! But if it works for the kid so be it! Still funny!

I've never had to answer a question on my iPad, or computer. I use Safari, so I don't know how it goes around Google questions, but I've never seen one.

Was going to say the same thing. I usually read the site on my iPhone and then often check back through Safari and I have not yet seen a survey.

Maybe we should keep this quiet so we do not start getting them....

It also requires patience and, generally, a good chunk of dough. Not a fan ... uses plenty of usable farm land, and water resources.

Since the surveys I can't read the articles at work, save for the first paragraph. I do know we're using an outdated version of IE.

Send me an email at jnewell@ljworld.com with the version of IE you're using and I'll pass it along. Thanks.

Although I have never golfed in my life it makes sense to me. Our kicking game will make the difference or not in at least three games this year. Staff is right on to be making this too a priority. Like to see some kick-blocking as well. Would love to see Pierson on kick returns too. Talkin about getting him in open space. It doesn't get any more open that a kickoff.