Carson, Calif. — Kansas University quarterback Dayne Crist threw for a touchdown and ran for another to lead the National to a 34-0 victory over the American on Saturday at the second annual NFLPA Collegiate Bowl. 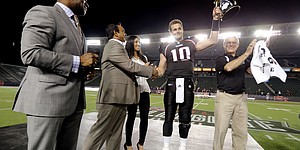 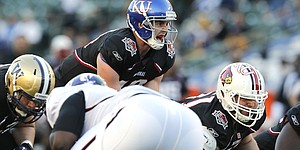 National team quarterback Dayne Crist (10) of Kansas calls out a play during the NFLPA ...

Crist completed seven of 10 passes for 61 yards and was named MVP. He opened the scoring with a one-yard run in the second quarter and followed it with a seven-yard TD pass on the next possession to help stake the National to a 17-0 halftime lead.

South Carolina kicker Adam Yates kicked field goals of 40 and 41 yards, Washington State quarterback Jeff Tuel threw for a score, and Texas Tech running back Eric Stephens Jr. ran for a touchdown as well to round out the National scoring.

The American squad fumbled the ball seven times, turned it over five times and didn’t cross midfield until late in the third quarter.

Indeed. It's good to see Dayne have some success after the frustrating and disappointing year he experienced in Lawrence. Best wishes, Dayne!

And to add one more comment: Dayne, thanks for the classy way you handled a very difficult and challenging situation this past season. I know it didn't turn out anything like you hoped, but you need not let that disappointment define your life going forward.

Way to coach 'em up Herm

As in Vermeil being the coach for the National squad. Have to wonder if Weis' offense simply isn't suited to the talent level we have at KU.

my sarcasm font must be broken

Our receivers were not great, but Dane was just inaccurate all year. I'm really glad for Dane, but also need to point out he completed 7 passes for just over 60 yards. It's not like he tore the defense up.

From the score it looks like Herm's "Run, run, run and punt" offense was as effective as ever. I always liked Herm, but the guy has no offensive creativity whatsoever.

It's not like he played the whole game either. He was named MVP.

Good job, Dayne Crist, and best to you. Always proud you're a Jayhawk.

Glad to hear it. He didn't live up to the hype this year, but I still think he helped KU in recruiting. I will wish him the best of luck in whatever he does from here on out, football or not. Unless he becomes a coach for a rival lol

Why was he even selected to play in this game?

The same reason he won the MVP...

Great job. Good to see your upbeat demeanor and positive mindset. I am hoping that you get the opportunity to play a lot more.

Dayne looked really comfortable out there and drew lots of praise from the commentators. Glad for him and his future. Best wishes!

He had an offensive line that could protect him and receivers that could get open.

Way to go! You did yourself and us proud!

Dayne was having fun. He looked good. His running touchdown was well earned. His general ball handling was solid.
Also, Josh Williams looked terrific. He had two monster sacks, one of them being Christ. All the KU players looked good.

This is a great story and looks makes KU look good.

I've been really impressed with Crist. When things went south at KU, he didn't make excuses and continued to be a great teammate. I think he has a shot at the NFL, because if you look at the mold of current QB's, he fits the bill with size, strength, and smarts.

I'm a little upset that the specific game times and players (and their jersey no.s) in the various games were not posted on the KUSports.com website a day or two before the games. I never found the Shriner game played in Florida. I found the NFLPA Bowl game by accident.

I did manage to watch the NFLPA game. I was pleasantly surprised that Crist was starting quarterback. I thought that all the KU players looked very strong. Crist and Williams were talked about and appraised numerous times during the broadcast. Josh Williams played great, and really flattened Crist on one sack of Crist. It wasn't Crist's fault; nobody would have escaped Williams on that play.

None of the other KU players were singled out during the game, and none of them were wearing their KU number. Only through KU helmuts (with about 20 team logos plastered all over them) could one distinguish if the players were KU. I think Marrongelli was center most of the game. He made outstanding blocks throughout his playing time. Zlatnik, also, pushed his men all over the field. I think Opurum was supposed to be playing, but I never found him.

I think it is a great story that so many KU players had an opportunity to play in these games in front of the NFL scouts. It's even more outstanding that all the KU players played so well. Matt Tait needs to do a special post about this. Recruits need to know; KU players will get an audience when it's time for them to leave college football.

No names on the backs of their jerseys. I guess the NFLPA could not afford to buy the players jerseys and they have to save them for next years game. I also didn't like the helmets with all the school names on them (but it seemed like alot of them had "jayhawks" or "KU" om them.

I had a couple of stories/notes on this game (as well as the others) in the weeks leading up to their kickoffs. I will admit that I did not have the jersey numbers (but they were wearing their KU helmets) but the game times and the names of the Jayhawks participating were all over this site. Sorry you missed it.

Can someone tell me why Crist is doing so well now, and struggled at KU. Was it the receivers he was throwing to? Was it the line protecting him? I watched him several times throw passes that could have been thrown better by a Jr. High quarterback. Why was this? What is different now?

Good point. I think our O line was poor, not giving Crist time to throw and our receivers don't know how to get open. Maybe Weis's scheme is too complicated for this team. Weis's playbook is for pros. We don't have pros on the team. Weis needs to dumb down his playbook to the level of talent we have ( or recruit, recruit, recruit!).

So you're saying Weis is a terrible coach?

DUMB DOWN HIS PLAYBOOK - SERIOUSLY? And you know " Weis's (sic) - Weis' playbook is for pros" , exactly how?

YES SERIOUSLY! And don't be such a jack correcting punctuation.

Too bad you guys are not bright enough to understand that Weis playbook is for a higher level of player than what KU currently has. It's too complicated for our current players to comprehend. All I am saying is that unless Weis starts recruiting a higher quality player, he better make his play calling a little easier for the guys to execute.

In this game he was well protected most of the time. He found open receivers. On one occasion, when he had to, he threw a low bullet that his receiver had to dive for to catch; an outstanding reception by the receiver as well as a pinpoint throw.
KU just needs additional good players. We've got quite a few, but need more to match up to Big-12 competition. It going to take time for us to rebuild to respectability.

I think that the lack of success in the passing game was multifactorial. Lack of pass protection from the right side of the line, inability to get open, inability to stop the pass and then catch the pass and of course missed pass opportunities by Christ, and harassment by press and public, with high expectations...compelling the premature promotion of Mr. Cummings.

I think the Chiefs are going to draft this guy number 1 overall.

Great to see. It's some good publicity for KU. Even if Crist didn't pan out at KU on the field, he's done a lot for the program. Any time the KU logo is on TV, it's a good thing.

I am happy for Crist that he has done well in these all-star games. My question is- why did he waste our time and not apply himself to help KU during his time here? It almost as if he never had any intention of improving the lowly Jayhawks. So...what was his motive for coming here? Maybe to access the training facilities and Coach Weis? Another question- why did Weis come, and why did he waste a season with Crist knowing that he had no intention of winning and being productive? And....why in the world would the all-star games have him on their rosters after how pathetically he played this year? My theory....conspiracy! Let's hear some other opinions.

Lucky of Crist to draw Vermeil instead of Herm. I'm glad for you Crist, and wish you the best, but what was your problem during the season? I hope KU football did not inherit a curse of the Great Mangino.

Well sitting on the bench all that time at Notre Dame didn't help. He should have transferred out when Weiss left.

Sometimes it's hard to come back after a setback.
Hope he has a great future and gets his confidence back.

Glad to see Dayne get some redemption after what had to be a difficult season.

I was never totally sold on Dane Crist, but in his defense I felt he could never get into any kind of rhythm with his receivers. He would make perfect passes that were thrown too hard and not held on to, or some that were just not caught. Then things would fall apart for him and he would make bad passes.

If I were an NFL GM, I'd take a flyer on him for sure.

What a great story and accomplishment for a really 'class act' young man. Trust it will lead to a serious opportunity to continue his football career at the next level. Proud to call him a Jayhawk.

Of course, all of the good college players are in Mobile this week

Crist continued his classy presence by not mucking up his KU helmet. Thanks, Dayne.

anyone else notice that Crist's center also has a KU logo on his helmet?

I was never sold on Crist due to his play for us, but does this show us how far down the football program is? Put him around some other good talent and he performed quite well. If this team doesn't show drastic growth will we be saying the same thing about Heaps when he leaves?

Dayne Crist is so good I bet the Chiefs take him with the no. 1 overall pick.