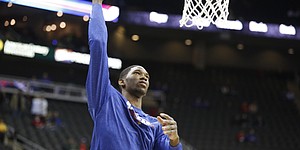 Bill Self postgame after KU's 80-63 victory vs. New Mexico

Bill Self postgame after KU's 80-63 victory vs. New Mexico

Kansas City, Mo. — Freshman center Joel Embiid makes this young Kansas University basketball team so much better when he plays as opposed to when he nurses foul trouble. His extraordinary numbers — 18 points, six rebounds, four blocked shots, three steals and no turnovers — compiled Saturday night in 25 minutes against New Mexico in the Sprint Center, tell only a portion of the story.

How much better teammates played with him on the floor showed even more about his value in an 80-63 victory against the talented, experienced Lobos, spoke just as loudly.

With the long-striding, quick-afoot, long-armed 7-footer trapping the post in support of Perry Ellis, Embiid masked his teammates' deficiencies as post defenders. For the Lobos, seeing Embiid coming at them, arms reaching for the ceiling, it was the equivalent of a hitter crowding the plate and seeing a 95 mph fastball heading for his jaw. Instinct kicks in and the goal becomes getting out of the situation without harm as quickly as possible. Hurried, even panicked, the guy with the ball changes his goal to not turning it over. Scoring no longer enters the equation. It becomes all about surviving the possession.

“He’s better than anyone else at that because you’re throwing over 9-5 (9-feet-5-inches from tip of the fingers to the floor) when he runs at you,” Kansas coach Bill Self said. “Other guys are a little softer in their approach and how they do it and their height and things doesn’t bother (the offensive players) as much.”

Ellis, as teammates and coaches of Embiid so often do, referenced more than the physical gifts of the 7-foot center from Cameroon.

“He’s smart,” Ellis said. “Whatever coach tells him to do, he’s doing it. It’s a big help having him right there blocking shots and everything.”

When Embiid went to the bench with 10:50 remaining in the first half, New Mexico found it easier getting to the basket and attacked with a confidence that withered once Embiid returned.

Embiid’s presence had the opposite effect on Ellis’ confidence and scoring opportunities. The Lobos no longer could pay extra attention to Ellis with Embiid posing such a threat as a scorer. Ellis scored 13 of his team-high 21 points and had six of his team-best nine boards in the second half.

Point guard Naadir Tharpe also played with more confidence when Embiid returned, knowing that if he threw it up near the rim, Embiid would catch it, rock it behind his head and throw it through the hoop in such a convincing manner it juiced not only the crowd but everyone wearing a Kansas jersey.

Playing alongside an athlete with such a rare blend of size, speed and grace, sets the bar high for teammates aware they are playing with a special basketball player who is improving, it seems, with each stride.

By playing the central role in Kansas quickly stretching a one-point halftime lead to nine points in less than three minutes to open the second half, Embiid allowed teammates to play more freely.

He makes Kansas a completely different team, which intensifies the need for him to figure out how to stay out of foul trouble. His first foul was whistled in the opening minute, far from the hoop. His second was an over-the-back foul when he attempted to snare an offensive rebound.

“I was frustrated, even though I didn’t think the second was a foul,” Embiid said.

Regardless of whether contact is made, referees typically call a foul when they see a player reaching over the man who has established position. Consequently, the more relevant issue isn’t whether a foul is committed, just whether it’s called.

“Next time, I’m going to be careful and not go over the back,” Embiid said.

He’s a quick learner. He’s quick, period. And he makes everybody playing with him quicker.

Nick Collison was dominant as a senior, so was Raaf LaFentz. Paul Pierce was long and lanky and sneaky good. Danny Manning was either the quickest big man I've ever seen or the tallest slasher. That said... JoJo Embiid might be the most talented player to put on a Jayhawk uniform since 1958! WOW!!!!!

First possession of the game last night, Embiid gets a foul hedging on a ball screen 20+ feet from the basket.

If I'm an opposing coach, I purposefully attempt to screen with the man Embiid is covering, and then instruct my ball handler to attack Embiid's hip with the ball. Heck, I might even bring in a bench player here and there solely for that purpose (risking a charge call).

What is the best opportunity for a team to beat KU? One big one is getting Embiid off the floor.

Embiid got a cheap over the back call. But isn't that where Embiid should be getting his fouls? In the paint? Let Embiid use his five fouls in the paint.

But hedging is what Bill Self bigs do. Its who we are...

As I say below, notice how Embiid fouls less than frosh Arthur or frosh TRob...Already. Those 2 greats could barely stay on the floor as frosh, while Embiid already is an impact player for KU. And even HEM has said Joel is key to a F4-run, which of course I agree with...

Erich -- I do realize that it is a staple of Self's defensive philosophy ... but our post players are fouling at a ridiculous rate. And we are dealing with the new rules application that makes that strategy even riskier.

See below .. Embiid is fouling more than Arthur did as a freshman (but not TRob) fyi.

Embiid is definitely key to a title run. If I'm Self (hypothetically, of course), I would strongly consider another option with Embiid. Otherwise, we risk him spending too much time on the bench. It is certainly worth considering.

It would seem that the big either helps on the screens or the opposing ball handler has a free path to the basket. Not sure how that is effective D. I think it was the Florida game where we did such a horrendous job of this as a team.

Fortunately, Embiid should be quick and long enough to be able to get out on the screen while maintaining separation. Just because the D was not executed well, and was the first foul by a big in the wrong situation doesn't mean that you throw out the D.

In addition to his continued learning on the court. His command of the English language mixed with internationally recognizable words is impressive. An example was his admonition for the balls performance when he missed his last FT near the end of the game….”Aww that f*&#ker.” Embiid has it rolling and is ready to play 30 minutes a game.

Embiid fouls less than frosh TRob or frosh Shady Arthur. Embiid already key, impact performer. Embiid = once-a-decade type of bigman. Embiid doing everything right: Watching Olajuwon tapes. Watching Withey tapes. Watching some A.Davis tapes would be good also. Getting coached by bigman-featuring and -developing coach Bill Self. Its all good. Enjoy him while he is here.

Erich .. you got me curious on the fouls. Comparting the three players their freshman seasons, it looks TRob fouled more than Embiid as you suggest, but Arthur did not:

Fouls per game a less meaningful as each played varying minutes -- Embiid 3.6 per game; Arthur 2.7; TRob 1.3. Again, that means very little. The foul rate per minute is the better indicator, so I think you were half right there.

Regardless of the numbers, we need to keep Embiid in the game. It is more important for Embiid to stay in the game, than for those other two during their freshman season -- for Arthur, we had Wright, Kaun, and Jackson; with TRob, we had Marcus, Markieff, and Cole.

Embiid is far more important to this team, than the other two were to theirs.

Mr Wilson I would like for you to prove me wrong but from the games I have watched one of the reasons that the other guys are so foul prone is that Ellis does not defend well and leaves them vulnerable. Notice that Ellis is never in foul trouble. I think that he is one of the most important players on the team and needs to be on the floor but he doesn't defend well against good players.

I think it's safe to say that Embiid will be gone after this season. He just keeps getting better every game. Unfortunately, I can't say that for the other freshmen, especially Selden.

We need Tyler Self back. It is hard to win without one of our key players.

So far, Embiid is proving to be underhyped compared to Wiggins and a better player than Wiggins.

Enjoy this kid while we can. Because he'll be the top pick in the draft if he continues to improve. NBA is dying for big men and I bet they are salivating at the prospect of this guy being on their team. Such athleticism and a huge impact on the game. He gets better every time I see him play. Awesome job Joel, great game. Couldn't be happier for a more humble and hard working kid!