Behind the Lens: Gearing up for the NCAA tournament 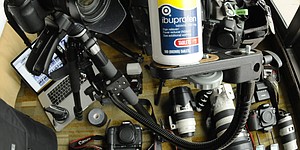 Covering an NCAA Tournament requires more than the usual amount of equipment for two Journal-World ...

For our daily work, Journal-World photographers carry two camera bodies with two lenses. On one body is a wide-angle lens and on the other a telephoto. Additional equipment might include a flash and a tripod. Now that we shoot video, some of us carry microphones and other video gear. Most of this fits into a medium-sized camera bag and is fairly light on the shoulder. For NCAA Tournament time, we have to up our game. Here’s some of the gear staff photographer Nick Krug and I are wheeling to the BOK Center in Tulsa, Okla., to cover the KU men’s games:

All this gear barely fits into two camera bags, a backpack and two large cases on wheels. That’s how we roll.

You might think it’s overkill on gear but here’s how it gets used.

At game time, we sit on the floor, along the baseline at opposite ends of the court. When action is at our end, we use the camera with the wide-angle or medium-telephoto lens. When action is at the opposite end we shoot with the telephoto. On the floor in front of us is a third camera body on a small tripod with a wide-angle lens. This camera is triggered with a wireless remote device connected to the camera in our hands. As you follow the action and take a photograph with the camera in your hand, the remote camera fires simultaneously. This provides two angles of view for one play. In addition, Nick will often set up a third remote camera. At the BOK Center, he has one placed under a courtside table, directly across from the KU bench. It provides a wide, side view of the court that would otherwise be inaccessible to a photographer.

Hauling all this gear to and from the arena, through security checks and then setting it up is both stressful and time-consuming. Photographing the game is a breeze. Dealing with all the gear is a headache. Now where did I put that ibuprofen?

I found this interesting. Photography is a hobby of mine. The first thing I do after every game when I follow up on it online, is go straight to this site & look at the pics. You guys do great work! I would've enjoyed a story or two of players crashing into you. I'm sure it's happened a time or two. Is all that equipment insured? Is it your personal equipment or owned by LJWorld? Sorta like a mechanic who uses his own tools I suppose. OK, time to bed. Can't sleep. Too juiced for an Illini beatdown. Wish we were the 1st game Sunday...

Cool article. It would be a lot cooler, though, if you shot Nikons.

I'm always intrigued in what goes into a product, and what it takes to make it happen and bring it to market. No different here. Lots of work and preparation, and I appreciate being able to fire up my laptop and enjoy your efforts. Thanks.

I agree KU79... sometimes we take for granted the hard work of the team that brings us all the great info and pics on the Jayhawks. Nice to read this. Keep up the good work.. we do enjoy your efforts.

Awesome article. You guys take phenomenal pictures, and it is wonderful to read the story behind the lens. Thanks! Besides a good photographer, you are a good writer!

Fun, interesting article. Regarding "one bottle of ibuprofen," headaches can be eliminated by cutting back on salt intake. All the daily salt you need is one level teaspoon. Processed food is loaded with sodium. Start reading the labels to religiously take your sodium down and your headaches will be no more. Go Hawks!

Good stuff. KUSports.com always has a great selection of photos in the photo gallery. I love the format, but it use to be able to look at the gallery. Not sure if I am doing something different or not?

Anyway, what a cool gig you guys have. Enjoy and Rock Chalk!

Yes, your photos are always amazing.

I enjoy the behind the scenes stuff.

meant to say the gallery was once easier to navigate through. Always good photos. Good work!

The only issue I have is the lack of shots of cute fans in the stands of the female variety. What were you guys doing anyway, shooting game photos? C'mon, I know there are shots in your files - share please!