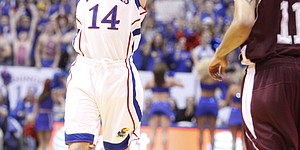 Kansas coach Bill Self talks to reporters after the Jayhawks' 64-51 victory over Texas A&M on March 2, 2011.

Winless against Kansas University since taking over at Texas A&M four years ago, and 0-2 during that time at Allen Fieldhouse, Aggies coach Mark Turgeon had nothing but warm and fuzzy things to say about his alma mater despite falling to 0-6 against the Jayhawks after a 64-51 loss Wednesday.

They did Wednesday, as evidenced by the way they watched the intro video and soaked up the atmosphere. And that was almost good enough to put a serious scare into the second-ranked team in the country.

“I thought we were pretty good for about 30 minutes, especially defensively,” Turgeon said. “And then our turnovers did us in.”

Of course, the Jayhawks (28-2 overall, 13-2 in Big 12) had something to do with it. Especially considering the team — and, really, the entire building — was rocking for the final home game in the careers of seniors Mario Little, Brady Morningstar and Tyrel Reed.

Having been in Allen Fieldhouse for a Senior Night before, Turgeon was aware of what to expect Wednesday, and he tried to prepare his team for it.

“When you’re playing KU on Senior Night in this building, with the way they score, it worries you,” Turgeon said. “You hope the game plan works, and you hope you’re able to execute. I told our guys to embrace the crowd. Just embrace it. I said, ‘If it’s gonna intimidate you, we’re gonna get our tails kicked. Embrace it and love being out there in that environment.’”

It didn’t take long for A&M’s players to understand what their coach was talking about. Just prior to tipoff, the Allen Fieldhouse crowd was as charged up as it had been all season.

“I thought we were gonna get a K-State or Missouri crowd, and we did,” Turgeon said. “The start of the game was electric.”

During his playing career at Kansas, Turgeon was a two-time captain, earned Big Eight all-freshman honors in 1984 and was named to the Big Eight’s all-academic team in 1986.

Though he coaches for one of KU’s opponents, Turgeon clearly is still loved around Lawrence. And the fans made sure he knew that during his latest trip home.

actually a great story by the ljw rare so embrace it!

Tait wrote this one. His stories are always nicely done.

Come on, you've got to know that's not what he meant. He was talking about getting a crowd at AFH like when KU plays either KSU or MU at AFH (not in Manhattan or Columbia).

this guy is a faker or an idiot.
A Mizzou Fan posting here
OR
just a dim wit.....

I think he meant the KU crowd would be worked up as if KSU or Mizzou was there to play...my take anyways...

Turgeon has to be high on the radar of the Kansas athletic dept. and fans of Jayhawk Nation. If or when Bill Self departs for a different pasture, Turg, Boyle or Manning might
fill the roles of final 3 applicants for consideration.

Those are three good names. The thought of having a KU guy be the head coach is enticing, but that's not the way that we ended up with Bill Self. If Turg proves that he can recruit to Texas A&M the way that Gillispie did, then he may be a finalist for KU down the road. I know that the aggies are having one of their most successful streches under Turg in terms of victories and tournament appearances, but as a KU coach can he win recruits away from UNC, Duke, UK, Florida, Texas, Ohio State, UCLA, or name your favorite Big East Team?

I know that Allen Fieldhouse sells itself, but never discount the hard work Bill Self puts in on the recruiting trail. Turg's persona lacks something that Self has, and it's the ability to be in total control of a room and still be friends with anyone and everyone he talks to.

and don't forget Self's ability to develop talent and build teams. He may not always get Top 20 recruits but look what he has done with the Morris Twins, Darnell Jackson and Russel Robinson. Give Self 2-3 years and he will create a machine

As someone on Comments pointed out yesterday, Bill Self and Mark Turgeon are about the same age. Bill is two years and one month older. I know, it seems like Turg is a lot younger than Bill, when you look at them side by side.

Bill always looks like he is having fun. May we all, like Bill, be eternally young today.

After last night, I’ll take Tad with Manning handling the bigs. Tad’s not afraid to run with anyone. Turg’s offense was offensive to watch. Passing the ball around the perimeter for 25 seconds without looking at the basket on every possession, I can do without. A poor man’s Okie ball.

don't think Self will be going anywhere soon. He's been here 8 seasons and has had the most succesful run of any coach in the country during that span. when you get to the top of the mountain, there's nowhere else to go. He'll be here for at least another 10-15 yrs, and will win another 2-3 championships. Turgeon will probably end up at a Pac 12 school if he moves. he definitely needs to be at a school with a better B-ball tradition.

Self doesn't want to coach pro ball.... He chose not to go back to his alma mater Okie state. Every place else is a step down.

Turgeon is a classy dude. I remember when he played @ Hayden in Topeka. Another great Kansas success story. Tyrel reminds me a lot of Turg. If/when Self ever leaves Kansas or retires, Turg is the guy they should go to in considering a replacement! Rock Chalk!

Some opposing coaches stand quietly as our team is introduced. But, I've never seen one applaud every KU player. It was class.

It's interesting to compare the pregame tactics of the visiting coaches at Allen Field House. Frankly, I think those opposing coaches who leave the arena during our introductions (like Baylor did), and others who actually try to give instructions to their team during our deafening video and introductions don't help their teams to stay focused. These are the teams that get nervous and give us a chance to build a big lead before they have time to break a sweat. A&M was focused from the beginning. The noise in the field house didn't seem to bother them at all, and they made a game of it until we finally pulled away in the second half.

I also like the great ovation Turgeon received from the KU crowd when he was introduced. That has to make a guy feel great.

Turgeon's players watched the pregame video to see if their coach's picture would appear. They weren't disappointed. They had big grins on their faces when they saw their coach in a KU uniform (he looked like he we 12). Also very cool.

I haven't been in AFH for over 20 years, certainly before the days of the videoboard. Back then, it was success if all the bulbs worked at the same time on the main board!!

Anyway, here is my question: Is the highlight video different for each game and is there a place online to view them?

Turg is never coaching KU (unless some utter catastrophe befalls Self). I think next-in-line is Danny. Then waaaaaay down, it's rock-paper-scissors between Tad, Turg and possibly Rex Walters. I'd even put Brady ahead of Turg.

kureader--- You were right on the spot with your post. You said everything that was on my mind that you stated. Turgeon was quite complementary. Thanks, Turg.

Turgeon looks like the guy on "Get Out" on HDNet who is always at the wet tshirt competitions.

I'm thinking Self should hire Larry and Gillispie as assistants, trainers, or something. I think Gillispie is an awesome coach who got hosed by Kentucky. I hope they continue down the slippery toilet led by Calisleazy.

That was really cool, Brown and Gillispie showing up for last night's contest. Any and all such connections to the Jayhawk program or to Bill Self make for cheerful appearances at our games.
Bill Self has pretty much guaranteed his future admittance to Hoops HOF, what with his winning percentage and all these championships. A second place, then seven in a row during his 8 years in Lawrence: stupendous! How fortunate we are to be the recipient of such a hire.
And yeah, it will be a fine thing someday to see Roy Williams sitting at courtside in The Phog. Classy thing he did, wearing that Jayhawk logo during our championship game in '08. He has a genuine love for Kansas University. I remember reading that at his camps he allows only UNC and KU t-shirts to be worn. (Man, every time I reminisce about that '08 Final Four I picture green freshman Cole Aldrich popping off the bench to do a shutdown job on Roy's Tyler Hansbrough!)