Behind the Lens: Capturing the coach 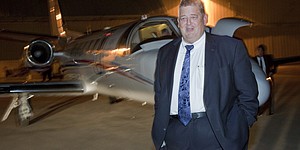 In a little more than a 36-hour period, on three separate occasions Journal-World photographer Nick Krug and I covered the arrival and introduction of Charlie Weis to Lawrence as Kansas University’s new football coach. If you can picture Weis in your head right now, it’s probably because of us.

Our sports reporters were tracking KU’s jet plane Thursday night, Dec. 8, surmising that Weis might land at the Lawrence airport. I got a call around 8:30 p.m. and within 10 minutes of my arrival at the airport the plane was in sight. Well, sort of. It was actually pitch black. With no ambient light near the KU hangar, I knew that any photo of Weis departing the plane would require flash. Ironically, using flash in total darkness isn’t easy. If you use automatic settings, the camera and flash tend to overcompensate. The camera’s auto metering registers the dark area and assumes a whole lot of light is required for a correct exposure. Any nearby subject, surrounded by darkness, could be blown away by the auto flash. To compensate, I manually dialed down my flash to 1/16 power. My other settings were, f5.0 aperture, 1600 ISO and shutter speed of 1/20. I had tested this exposure by photographing my hand held as far away from me as I could reach. This let me gage how much flash would hit a subject at three feet. I could then do an estimate on the flash output at other near distances.

Focusing was another problem. It was so dark that my camera’s auto focus barely recognized my hand during the above flash test. So as Weis stepped off the plane to walk to a nearby car, I had several concerns about getting a usable photograph.

Plus, did I mention the part about feeling like a member of the paparazzi? I had visions of my bright flash blinding the new coach, causing him to fall off the planes stair steps.

Fortunately it didn’t happen. The handful of journalists present were warmly greeted by Weis and I approached to within range of my flash.

Although I could barely see the guy through my viewfinder, I kept pressing the shutter button and praying that he was in focus and in my frame. Imagine being in a dark closet photographing a black suit coat — as it moves. At times, the light of a TV camera would provide a brief moment of illumination and I would quickly lock focus and fire.

After Weis got into the car, the interior dome lights enabled focusing through the window. Worrying about correct flash exposure and focus was hard enough — now I had to take into account photographing with flash through a window. You can’t shoot flash into glass directly because of its reflectivity. The flash will bounce the light right back at you.

To avoid this, I moved to a position at a 45-degree angle to the window. This eliminated the possibility of getting flash reflections but would still reach the subject.

As the car pulled away, Weis waved to us one last time and I snapped a final frame. I only took about 20 shots during this whole event and of those only five were usable. Other frames were out of focus or totally dark because the flash did not recharge quick enough during a sequence of shots.

The flash testing prep work and a quick recollection of how to correctly shoot flash through glass got me the shots I needed.

"..Any nearby subject, surrounded by darkness, could be blown away by the auto flash.." It's a good thing CW provides a broad subject that the flash can illuninate. .

It's a new word. Similar to illuminate, but better. Look it up tchotchke.

Maybe you should apply for a proofreading job, since it bothers you so much! I hear "The Daily Nitpicker" needs somebody like you!

I was up late and decided I would make a quick read of the Sunday Articles on KUSports. To my surprise, I see one article and it is about how difficult it is to take a picture at night and whether or not i should be using a flash. Some ramblings of how you can't see th plane late at night.

I hope that we get something.

i didn't even give one idea in basketball, and let's admit it there has to be a few stories in Basketball going on.

I actually thought the article was interesting. But yeah, I would sure like to see some coverage about the DC, prospects etc. Of course I don't want to see anything counter-productive. I am afraid an article on transfers that are not official will only hurt us.

Glad to know we have such great photographers here! Thanks guys! Rock Chalk!

Dayne Crist update: DP retweeted a source that said Crist told his teammates that he is transferring to KU.... Unconfirmed, but gotta listen to the streets when they talk.

I enjoyed this comment more than the actual article. Cameras?!

I enjoyed this comment more than the actual article. Cameras?!

I believe someone else mentioned in another article that it's based on a false rumor.

Wouldn't Crist wait until he knows Charile's surgery went OK? I would think Charlie probably told him to do so. I also feel that Dayne would choose KU, I mean look at the program now.

But I also think that Charlie is a pragmatist - he knows all about bad surgery, look at his history. It's a side of society almost everyone chooses to ignore, and for good reason.

But I believe Charlie's surgery will be succesful, Crist will come to KU, and look who visited Saturday! It's all coming true. Merry Christmas everyone!

Also, thanks for working the beat to get those photos you guys - I noticed you were on it, and it's true no one scooped you on those photos! Merry Christmas, good work.

There is a lot of negative talk around the state of the stadium. The stadium is obviously not up to par with our competition and that is no secret. I believe I speak for many fans when I say that an article about the stadium would be welcomed. Are there plans to renovate? If so, are the renovations major? Has Zenger ever made mention to a upgrade? With the athletic department debt, are we anywhere near able to have a major renovation?

Would love an article about the stadium.

My goodness, what a slow reporting day! LOL. Telling your readers how to take pictures. Hmmmmmmm.

What's this guy talking about? There are plenty of websites with, eh-hem, pictures of ex girlfriends or current/former wives taken in the dark. If they can figure it out why can't this guy?

I absolutely loved this article. I understand it is not a news piece, or an opinion piece, but it is a piece about the behind the scenes workings to get the news to us. I found it entertaining, engaging, informative, and interesting. Thank you. Please, when you have the time, more like this one!

I agree with halogenlamps. I really enjoyed this behind the scenes article about the challenges that sports photographers have in doing their job. It allows us to more fully realize the work involved, and to appreciate more, the pictures that will accompany future articles about Jawhawk sports. Thank you!

Walter Ioos would be proud. If it were a better picture. Preferably of a bikini clad angel on the beach or a professional athlete.

To Mike Yoder--- When you were talking "camera language" in the article, you kinda lost me. However, the final reward/result was a great looking picture, which a lot of fans and alumni enjoyed when it first came out. Thanks for your great shot of HCCW and the coverage overall.