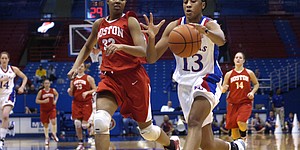 After the first eight minutes of the second half, Kansas University's Taylor McIntosh had seen enough.

With just over 10 minutes remaining, however, McIntosh put a stop to Burks-Wiley's run with a blocked shot under the basket.

The Terriers' leading scorer managed only one basket the rest of the way as the Jayhawks defeated BU, 71-57, on Sunday at Allen Fieldhouse.

"She (Burks-Wiley) was getting open looks in transition because I had help back with the guards," McIntosh said. "But Bonnie (Henrickson) said, 'I don't care what you do, just make sure you get your nose in her shot,' so I got up and guarded her."

The block was part of a career day for McIntosh, who had 14 points, 17 rebounds and four blocks in 38 minutes. McIntosh's block of Burks-Wiley was key in the fact that it put an end to a 20-6 Terrier run that erased the Jayhawks' 36-25 halftime lead.

The Jayhawks (10-2) came out somewhat sluggish and lagged, 11-6, early. KU kept the Terriers within reach by toughing it out defensively. The effort produced 15 Terrier turnovers in the first half, which helped spur a 24-6 run that led to the 11-point advantage at the half.

"For us to force Boston University into 15 turnovers when they average 14 a game was good," Henrickson, the Jayhawks' coach, said. "We tried to pressure, tried to get some opportunities in transition, and at times our defense was very good."

Jayhawk sophomore Danielle McCray returned to the lineup after a two-game absence, and although KU's leading scorer went just 2-for-10 from the field, her presence on the court provided a lift.

"She (McCray) draws a lot of attention on the offensive end," McIntosh said. "There was one possession where she was tripled-teamed, so I think with a lot of teams focusing on her it opens things for other players. And today I benefited."

McCray went 6-of-6 from the free-throw line to finish with 11 points. Guard Ivana Catic hit all six of her free throws in the second half.

The game's only negative could prove to be a big one. Sophomore guard Sade Morris - who matched McIntosh's team-high 14 points - went down late in the second half due a knee injury.

Henrickson said the extent of the injury and Morris' status would not be known for a few days.