KU's Self has help

"This guy, Lamont, I don't know if he can dunk. He comes from New York," Self, KU's hoops coach, said, needling the 6-foot-9, 242-pounder, who is in town all week working as a camp counselor and playing pick-up games with the current Jayhawk players.

"Little soft, little soft," a grinning Self screeched after Hamilton caught a lob pass and rifled home a hard slam. 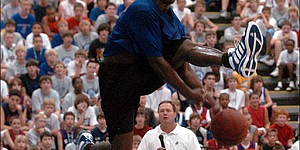 Sophomore-to-be Rodrick Stewart shows off his stuff while Kansas University coach Bill Self and his ...

"Norm told us he's a great kid. He is a fabulous young man and a good player," Self said of Hamilton. "He's good for our guys to go against a big body. He has some weight on him, can knock and bang some. I think he'll enjoy this week a lot."

Hamilton never had ventured to Kansas before this week.

"I'm from Brooklyn. This is a little different because it's more quiet and stuff," Hamilton said.

That's exactly the same thing he told Self this week.

"The first night he said he couldn't believe how slow it was out here and I said, 'Well, you haven't walked in my shoes the last three weeks.' It seems like it's not exactly slow," Self said.

KU's coach was referring to a hectic few weeks following the May 19 melee outside Moon Bar. J.R. Giddens, who had surgery to repair a slashed artery in his right calf, remains on crutches in Oklahoma City with a cast on the leg. 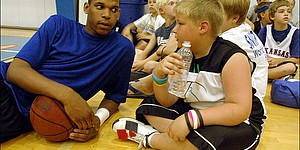 Kansas University sophomore-to-be C.J. Giles talks with Drew Henderson, of Kentucky, one of the campers ...

"He's non-weight bearing for three or four weeks," Self said of Giddens, who will be off the court, most, if not all, summer. Self said there was no change regarding Giddens' status on the team, a decision to be made after results of the police investigation into the melee are completed.

"Darnell got back to Lawrence Saturday," Self said of the Jayhawk sophomore, who was in Las Vegas last week visiting his mother, Shawn, who is recovering from broken bones sustained in a car wreck - a crash that ultimately claimed the life of Jackson's grandmother.

"We're hopeful his mother, even though she's had extensive rehab, will hopefully be able to travel home for the services. It's been a tough time for the Jackson family. Darnell is holding up well and handling it all very well," Self added.

¢ Payne here, too: Luke Payne, a sophomore guard from University of South Carolina Upstate College also is visiting this week and working out with the Jayhawks. His dad is Eddie Payne, former head coach at East Carolina and Oregon State.

"Luke wanted to come out here because he's real close with Joe Dooley," Self said of his assistant coach.