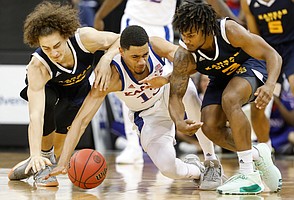 Kansas guard Tristan Enaruna (13) gets on the floor with UMKC forward Josiah Allick (20) and UMKC guard Brandon McKissic (3) for a loose ball during the second half, Saturday, Dec. 14, 2019 at Sprint Center in Kansas City, Mo. by Nick Krug

As college basketball players around the country continue to seek out new opportunities, the Kansas men’s basketball program has started to surface as a potential landing spot for a few of them.

Yesterday, we shared a report that Northeastern’s sophomore point guard, Tyson Walker, had Kansas on his list of six finalists and that a decision was expected this weekend.

Another player worth tracking who is involved with the Jayhawks is Kansas City guard Brandon McKissic, a 6-foot-3, 195-pound guard from Ferguson, Mo., who has flashed strong skills on both sides of the ball throughout his career just down the road.

After landing on the Summit League’s all-defensive squad as a sophomore and junior, McKissic was named the conference’s defensive player of the year as a senior.

When he wasn’t locking people up and finishing among the team leaders in steals (27 in 18 games) for the Roos this season, McKissic was leading the team in scoring at 17.2 points per game on 50.8% shooting from the floor and 43% shooting (30 of 70) from 3-point range.

McKissic, who has been tracking his recent recruitment on his Twitter page (@BMcKissic3) posted a graphic of himself with a couple dozen team logos around him and the words, “Been a crazy couple days! Blessed for everything!” around them.

McKissic spoke with the KU coaching staff on Wednesday and appears to have plenty of options for his next stop. Included among them are KU, Missouri and Kansas State.

He reported on Twitter that KU has offered him a scholarship and the list of teams doing the same thing continues to grow by the day, with schools as small as Iona and Stetson and as big as KU, Florida and UConn — and everything in between — taking a run at the Roos’ transfer.

The Jayhawks are entering into an interesting offseason, both in terms of what their needs are and what’s available. With the NCAA’s one-time transfer exemption for immediate eligibility likely to pass in the near future, those players in the transfer portal could not only be looking for new homes and fresh starts, but also the place that they can play immediately.

KU coach Bill Self said after his team’s loss to USC that the Jayhawks need to get more athletic in order to return to the ranks of national title contender. While McKissic and Walker are not built the same way as USC’s Mobley brothers, who made life miserable for Kansas on both ends of the floor, both are electric athletes with good experience and appear to be the kinds of guards that Self has always favored.

McKissic, in a recent interview with PittsburghSportsNow, said he hoped to narrow his list to a group of finalists sometime in April and that he was looking for the right fit that would allow him to excel on both ends of the floor.

“I want to be a scoring option because what I’m going to bring on the defensive end is going to be understood. I’m going to bring that intensity on the defensive end always," he told the website. "I’m telling teams that I really want to make an immediate impact as a scoring option, too. I also want to win and I want the coach of whatever team I pick to look at me as a piece that will help them win a championship.”

With rotation players Ochai Agbaji, Christian Braun, Dajuan Harris, Bryce Thompson and Jalen Wilson all expected to be back in 2021-22, KU has quality options on the perimeter. But an increased defensive presence and the addition of another true ball handler and scoring option or two is never something Self would turn down.

It’s still too early to know how KU might fit all of the pieces together or even how the roster will look when the team reports to campus in June for the start of summer workouts.

What is clear is that the Kansas coaches, though surely still disappointed about the season’s recent ending, have already jumped full-speed into preparations for next season.

A couple of other names to keep an eye on in the next few weeks include:

• Prep guard Ty Ty Washington, a 6-4, 180-pound point guard from Compass Prep in Phoenix, who, as a 4-star prospect, is ranked as the No. 32 overall player in the 2021 recruiting class by Rivals.com. Washington had been committed to Creighton but recent decommitted

• Minnesota transfer Marcus Carr, a 6-2, 195-pound junior guard who averaged 19 points, 4 rebounds and 4 assists for the Gophers this season

• Bobby Pettiford Jr., a 6-foot, 170-pound 3-star point guard from Creedmoor, N.C., who recently decommitted from Louisville and was ranked No. 115 by Rivals.com in the 2021 recruiting class

• Pitt transfer Xavier Johnson, a 6-3, 200-pound junior guard from Woodbridge, Va., who averaged 14 points and 6 assists for the Panthers this season

Here's a quick look at some highlights from the 2019 game between McKissic's Roos and KU at Sprint Center. McKissic is wearing No. 3 in dark blue.

Any transfers or recruits should be 6’8” or taller. There, I said it.

PLEASE don't even look at this kind of player. We need taller & athletic kinds, right? If not, I don't mind to recruit the kind like:

DM me if you have an opening. Obviously our HCBS' coaching staff needs a major upgrade.
SERIOUSLY!!!!!