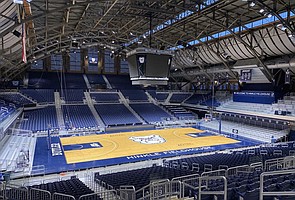 Indianapolis — Few venues in sports, let alone in college basketball, can match the history and feel of KU’s Allen Fieldhouse.

Hinkle Fieldhouse is one of them.

Built in 1928 thanks to the generosity of 41 businessmen, the arena, originally known as Butler Fieldhouse, opened with a seating capacity of 15,000, which, at the time, made it the largest basketball arena in the United State for 20 years.

It made sense that the venue opened with that type of distinction because, for the next several decades, it was the setting for some incredible moments in basketball and beyond.

Presidents have spoken and campaigned there. Olympians and legends have competed there. And the state's passionate basketball fans have helped ensure, through donations and renovations, that the arena affectionately known across the Hoosier State as "Indiana's Basketball Cathedral," has been preserved properly and stood the test of time.

Perhaps best known for its role in the classic basketball movie “Hoosiers,” Hinkle has long been home to the Indiana high school state basketball tournament, which was portrayed to perfection in the film.

Before the game, in order to calm his players’ nerves and get them to believe they can win, Hickory coach Norman Dale, played by Gene Hackman, has his players measure the height of the rim and the distance from the basket to the free throw line before their first practice in the building.

“I think you’ll find it’s the exact same measurements as our gym back in Hickory,” the coach tells his team after registering measurements of 10 feet of the ground and 15 feet to the free throw line.

The movie was loosely based on the story of tiny Milan High’s upset win of Muncie Central in the 1954 Indiana state title game. That game was played inside Hinkle Fieldhouse.

Kansas basketball coach Bill Self, himself a former high school hoops star in Oklahoma, said Sunday that the opportunity to coach in the building and experience its mystique firsthand was something he hoped would happen the minute he heard the 2021 NCAA Tournament would be played at six different venues in and around Indianapolis.

“That was one of the things that I said all along, ‘I hope we get a chance to play in Hinkle,’” Self recalled. “I haven't been there. Been a fan of it since the movie came out. And we play in a field house that’s very similar to Hinkle. You can see the sunshine coming through (the windows) on the court and stuff like that.”

KU’s coach, a self-anointed “big history guy when it comes to our sport,” said it was Hinkle’s history that made it one of the two college hoops venues in which he has always hoped his team could play. The other is The Palestra at Penn in Philadelphia. 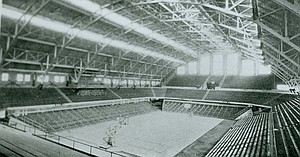 Hinkle Fieldhouse, shown here at Butler Fieldhouse in 1933, is one of college basketball's most iconic venues. (Photo courtesy butler.edu). by Matt Tait

While crossing one of the two off of his bucket list on Monday will be a delight, Self said he did not anticipate having much time to soak it up, given the fact that his 3rd-seeded Jayhawks (21-8) will have their hands full with trying to get by No. 6 seed USC (23-7) and into the Sweet 16.

“I'll look around the inside of the building,” Self said. “But I won't walk around. I don’t even know if they’d let us even walk around. But I'll certainly study it. I'll probably study it and compare it to Allen, how old the building is and the feel and that kind of stuff.”

This year marks just the second time Butler’s home arena has hosted an NCAA Tournament game. In 1940, Hinkle Field-house served as the host of the East regional, which featured Indiana, Duquesne, Western Kentucky and Springfield com-peting for the right to go to the finals in Kansas City, Mo.

Interesting that they changed the orientation of the court.

Didn’t we play in the Palestra a few years ago?

"KU’s coach, a self-anointed “big history guy when it comes to our sport,” said it was Hinkle’s history that made it one of the two college hoops venues in which he has always hoped his team could play. The other is The Palestra at Penn in Philadelphia."

Maybe going forward, he should schedule games at Butler and Penn so his Jayhawks can play there. Just a thought...

I agree they should play there in the non-con schedule at some point. Seems much more likely for Butler to happen versus Penn. Butler has been on the national radar for about a decade now.

I think KU played at the Palestra when Roy Williams was coaching the Jayhawks.

Which court did we play on Saturday? If it's different, it seems that would require getting re-accustomed to the lighting, floor, rims and backboards and certainly depart from the usual 2 games at the same site..

I recognize these times are different from the norm and we are fortunate to even have games. It's obvious the entire country needed something to put some joy into and this is serving that purpose.

KU played at Farmers Coliseum on Saturday, the home of the IUPUI Jaguars. So, yes, it is a different venue, but they got in there earlier today to shoot around and get a feel for it. Same for both teams. USC played at Bankers Life Fieldhouse, home of the Indiana Pacers, in Round 1.

cool story Matt! It even looks like Allen, in a way. ok, we got this!