Dunk you very much: Jayhawks trending in right direction above the rim 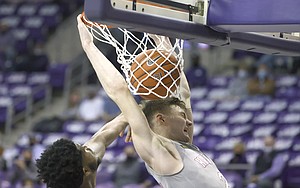 Evidently, dunking a basketball can be contagious.

After recording just 16 dunks through their first 10 games of the season, the sixth-ranked Kansas Jayhawks recorded a whopping total of six in Tuesday night’s run-away win at TCU.

Or was it seven? The highlights at the bottom of this blog show Mitch Lightfoot catching and finishing a lob that I didn't initially see. The stats on statbroadcast.com listed KU with six dunks, but the total appears to have been seven.

McCormack had two dunks — one off of a rebound and another off of a lob in the paint. Ochai Agbaji flushed two lobs — one from Dajuan Harris and another from Jalen Wilson. And Christian Braun hammered a pair of two-handed dunks while driving into the paint during the game's first 13 minutes.

While the dunks were worth 14 points in a game the Jayhawks won by nearly 30, their presence may have been the single most important stat of the game.

Bigger than David McCormack’s 20 points or eight rebounds. Bigger than Dajuan Harris’ seven assists in relief of injured starter Marcus Garrett. Bigger than the team’s 52% shooting from the floor and 40% shooting from 3-point range. Especially when you consider that this is a team that is still searching for ways to replace a player who finished the 2019-20 season with 103 dunks himself. That total came two seasons after Udoka Azubuike dunked 120 times as a sophomore.

The reason? Because slam dunks, with a little oomph added in, were exactly what this team needed to set the tone for the night and to help move past a tough home loss to Texas just three days earlier.

“Coach always talks about dunking and how it can really bring the crowd into it or bring the energy into a game,” McCormack said after Tuesday’s victory. “We had a lot of wide-open opportunities for dunks. Put-backs or lobs or just straight-up dunks. So we capitalized on that opportunity.”

Both McCormack and sophomore Tristan Enaruna said after the game that there was no extra emphasis put on getting dunks on Tuesday night but that the dunks were the product of Kansas attacking TCU with the right mindset.

“I do think it was more aggressive,” Self said of his team’s approach. “I think we got out of our ball screens better. We were able to throw the ball up two or three times off ball screens (and we) scored in transition much better.”

Those examples, which led to some of the dunks, are among the dozen or so things that Self and his coaching staff consistently emphasize to the Jayhawks year after year and practice after practice.

“He always emphasizes that,” Enaruna said of Self encouraging his team to dunk the basketball. “You know, he wants to go strong.”

Added McCormack: “Personally, I wasn't looking for more dunks. But I was looking for a lot more rebounds, and that's kind of where the put-back (dunk) came in. And CB just made a great move to drive downhill and I had another lob (dunk), so I think we just capitalized on every opportunity.”

Here’s a quick look at the highlights from Tuesday night, which features all six dunks by the Jayhawks — two from McCormack, two from Christian Braun and two off of lobs from Ochai Agbaji.

Got the offense rolling last night (and then some) 🤙

in the video Lightfoot threw down on a lob as well. I didn't see the live action but I'm assuming that it must have been waved off due to a foul on the floor, otherwise there were 7 dunks for KU in the game.

just saw the clip on espn.com and Lightfoot's dunk counted. So there must have been 7 unless one of the other 6 were waved off.

Interesting stuff, Jonathan. I completely missed Lightfoot's dunk, but so, too, did the official stat keeper, evidently. Here's the screen shot from the Statbroadcast site that keeps the stats showing 6 dunks for KU. But you can definitely count 7 in those clips.

It makes me wonder if McCormack's putback was called a rebound lay-in or something like that. Either way, it clearly was 7 dunks. Thanks for pointing that out. I'll tweak the story.

Thanks for the update. Maybe the stat taker had called in an early night and missed the 7th dunk.

on the topic of dunks, it could be fun to look back at some of the best dunkers of the Self era at KU.

Off the top of my head I'd probably put McLemore, TRob, Jamari Traylor, and Dok on that list.

Going back a little further I'd add Giddens and Releford.

Agbaji should make the list by the time he leaves KU. He's a high flyer.

Honorable mentions to Julian "the raptor" Wright, who connected on a 360 in the Big XII championship game against UT I think in 2007, and also to Elijah Johnson who I always liked to see on the receiving end of a backdoor lob.

Matt, how about a column on KU‘s best dunkers in history, complete with video clips?

Spot on article, Matt. Really glad to see our players wake up. Played with aggressiveness, awareness, unselfishness, smart-plays. No more weaving and weaving offense, most of all. Yes, that's right, our offense efficiency shoots up through the roof. This is exactly what I've been waiting for. I want to see Wilson, Enaruna rip the rim like others, too. I know they're capable.

It doesn't matter if it's TCU, even if we play against team like UT, if we play together like that, we are officially a NC contender once again!

UT’s veteran guards - Coleman, Jones, and Ramey - were not going to allow any room for dunking.

Dauum, you're right, even OU was able to deny our miserable 'lob' attempts..