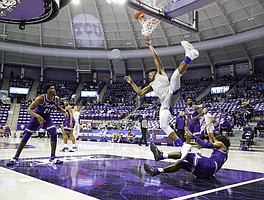 Kansas junior Ochai Agbaji falls to the floor during a game against TCU Tuesday night at Schollmaier Arena in Fort Worth, Texas on January 5, 2021. (Photo/Gregg Ellman) by Gregg Ellman

A whirlwind few days for Ochai Agbaji culminated Tuesday night, with the Kansas junior dropping 19 points to help No. 6 Kansas sprint past TCU, 93-64, in Fort Worth, Texas.

In the roughly 72 hours that followed Saturday’s home loss to Texas, Agbaji twice encountered situations that nearly kept him out of KU’s latest victory.

The first came over the weekend, when Agbaji received what turned out to be a false-positive COVID-19 test after taking a rapid test.

Kansas coach Bill Self announced the false positive during a pregame television interview with Greg Gurley. And he talked a little more about it during his postgame Zoom call with reporters.

“That’s what happens when you do the rapid test,” Self said of the false-positive. “We've all experienced those. I've had one in the last two weeks. … That's something every team is going through. And it's nothing unusual for it to happen to us. It’s happened several times already, and it'll probably happen some more moving forward.”

Self said that when a player or coach receives what they believe to be a false-positive test result, the protocol is for that individual to quarantine and isolate himself until he receives two negative PCR tests back-to-back on different days.

“Obviously, that confirms that it was a false positive,” Self said. “We didn't think it was an issue. But it was something that we had to deal with. Fortunately, all he missed out on was one practice.”

While awaiting his PCR test results, Agbaji sat out of Sunday’s practice but was able to return for Monday’s session. That return, however, was short-lived, as Agbaji tweaked a hamstring during Monday’s practice.

Self said after Tuesday’s victory that they discussed holding Agbaji out of the TCU game altogether.

“We talked about it a lot with the doctors,” Self said. “But he went through some pretty extensive, rigorous types of stretching and movement at shoot-around and he actually felt pretty good. So he got a ton of treatment and said that he was going to give it a try.”

With backcourt mates Marcus Garrett (head) and Bryce Thompson (back) already sidelined for Tuesday’s game, Self signed off on the decision for Agbaji to play, but not without some ground rules.

“I told him that if (he felt) anything coming on or if it twinges at all, (he was) coming out,” Self explained. “And he said he’d let me know. But there was absolutely nothing. I thought he looked 100%. I thought he did great. But he does need a couple of days. So this little short break will hopefully help us and hopefully he'll be closer to full speed by Friday.”

Kansas is off until Saturday, when Oklahoma comes to Allen Fieldhouse for a 3:30 p.m. tipoff on CBS.

Kansas coach Bill Self on what stood out in 93-64 road win over TCU by KUsports.com

David McCormack after leading Jayhawks with 20 points against Horned Frogs by KUsports.com

Tristan Enaruna on playing without Marcus Garrett and why KU was able to get more dunks by KUsports.com

It is refreshing to hear a leader talk about false positives. The rest of the world seems to be walking around with this mistaken notion of perfection regarding the tests. Just part of the nonsense.

Glad the training staff was able to duct tape him together, and that Tristan and everyone stepped up in a big way.

Here we go again with beating Covid to death. Media figures is why we will never see normalcy again.