Jayhawks check in at No. 27 in first NET Rankings of 2020-21 college hoops season 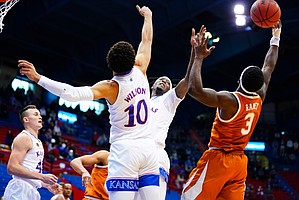 Shortly before reports surfaced Monday about the NCAA reaching an agreement to host the 2021 NCAA Tournament entirely in Indiana, the first NET rankings of the 2020-21 college basketball season were released.

Now in its third season of existence, the NET Rankings — NCAA Tournament Evaluation Tool — are tracked throughout conference play and used each March to help the selection committee determine who gets in and who doesn’t along with seeding for the NCAA Tournament.

Despite their 8-2 record, with the only losses coming to No. 1 Gonzaga and No. 8 (and soon to move up) Texas, Bill Self’s Jayhawks came in at No. 27 in the initial NET Rankings.

The Jayhawks are currently 3-2 in Quadrant 1 games and 4-0 in Quadrant 3 and 4 games, the latter of which do not help teams near as much. KU’s win against Division II Washburn did not factor into its NET ranking.

According to NCAA.com, the system used to determine where a game falls on the Quadrant scale looks like this:

For the purpose of boosting its NET ranking, KU’s road win at Texas Tech (Quadrant 1, No. 18 in the current NET rankings) currently registers as the Jayhawks’ best win to date.

The losses to Gonzaga (No. 1 NET) and Texas (No. 9 NET) did not hurt as much other than by taking away the opportunity for a Quadrant 1 win.

The Jayhawks still have plenty of time to move up in the rankings, of course, with 15 Big 12 Conference games remaining and one neutral-site clash with Tennessee still on their schedule.

This offseason, the NET rankings underwent a change designed to simplify the process from five metrics down to just two — Team Value Index and efficiency rating.

According to the NCAA, the change is designed to increase accuracy and simplify the process.

The TVI is a result-based feature that rewards teams for beating quality opponents, particularly away from home. The efficiency rating is a team’s net efficiency adjusted for strength of opponent and location across all games played.

All of a team’s games are factored into its NET ranking and the games at the beginning of the season carry just as much weight as those at the end, as it’s the type of game, its location and the result that matter most, not when the game was played.

The NET no longer includes winning percentage, adjusted winning percentage and scoring margin as stand-alone factors. Rather, those components, and several others, are mixed into the other metrics in an attempt to use game results, strength of schedule, game location, scoring margin, offensive and defensive efficiency and the quality of wins and losses to determine the country's best teams.

How can you factor anything with no fans? Is life one big formula now? Algorithms solve all problems? I don’t even care to look at 20 of the teams ahead of Kansas when they loss to #1 and #8. Logic is a bad word these days.

agreed on the losses, but look at the wins. Its been all crapola teams. Wins haven't been impressive at all and even the semi-decent wins, we barely squeaked it out. i think 27 is accurate.