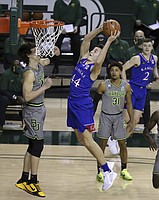 Encouraged by the play of his reserves during Monday’s road loss to Baylor, Kansas basketball coach Bill Self said this week that he would like to see even more production from the KU bench in the days ahead.

But Self made sure to put reasonable expectations on his current batch of back-ups, who are not known for their scoring prowess. He also emphasized that better bench play would not eliminate the need for big games from KU’s starting five.

Tuesday night, during “Hawk Talk” with Brian Hanni, Self said that while reviewing the game film from the loss to Baylor, “the anger emotion crept in a little bit because we were so close and that could’ve been such a different (game).”

“We’re not that far off,” Self added of a Kansas team that has lost two straight and sits at 10-4 overall and 4-3 in Big 12 play. “But we need everybody playing well. We’re not a good enough team to have three out of five starters or two out of five starters play well because our bench isn’t going to be a scoring-type bench.”

“I thought our bench was better,” Self said after the loss. “I thought Mitch and Tristan and ‘Juan all did some good things.” 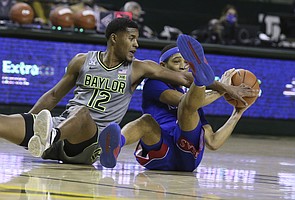 With freshman Bryce Thompson out of the equation for a few more weeks with a broken finger and junior college transfer Tyon Grant-Foster still working to find his role — Grant-Foster has played a total of just 27 minutes in KU’s seven Big 12 games — the Jayhawks figure to lean on Enaruna, Harris and Lightfoot a lot the rest of the way.

Self said the idea of playing Garrett and Harris together is not off the table, but because neither player is known for his outside shooting, Self said the Jayhawks have to exercise more patience and emphasize execution in the halfcourt when those two are in the game.

With Enaruna, who Self has said could be one of KU’s best players come February, the focus is on consistency and continuing to take more pride in his role on this team.

Against Baylor, Self said Enaruna played one of his better games, impacting the game in a positive way even when he was not scoring.

That’s a far cry from what Self has been used to throughout his Kansas career, when future NBA lottery picks and all-Big 12 players have been on his bench on semi-regular basis.

Having those types of players to turn to when one or two of his starters has an off night, is invaluable, Self said.

“I mean, we won a national championship and I don’t believe all five starters always played good,” he said. “But we had Sherron Collins coming off the bench, who was our best, most talented player. Can you imagine, on our team right now, having a bench guy be the best player in an Elite Eight game (Sasha Kaun vs. Davidson in 2008) or a bench guy being your most talented player (Collins). We just don’t quite have that yet.”

“We’ve got to get more bench production,” Self added. “Because (when we don’t) it puts too much pressure on your starters all to be good.”

2008 was such a stacked team. IIRC none were even first team all conference or at least there was an article at the end of the season talking about it.

Something that seems to be overlooked about that teams was their development and at the FT line in particular. I think they went from 60% in non-con to 70 in conf to 80 in post season and 13 of 14 in the NC game. Some said Memphis gave away the championship at the FT line, but it was just as much a matter of KU winning it there and all the prep time leading to that point.

KU has definitely given away tourney games, especially at FT line, like against Syracuse in 2003 and Illinois in 2001.

Matt, would seem to me that to balance out the schedule, they are just going to have to pick a neutral court in that last week to play as many of the games as possible. Is what it is, there won't be logistical time to let teams play home/away and travel to multiple sites. They may have to play 3-4 days in a row to knock them all out, meaning that so much will be riding on that week in so short a time.

Interesting thought. I know they'd rather avoid that if they can. But it'll be interesting to see how many games still need to be made up when we get to that point. That will determine how much or how little they can do to get 'em all in.

If I'm a betting man, I think I'd still bet on at least a few teams playing fewer than 18 Big 12 games this season. At that point, the Big 12 regular season champ may be decided by winning percentage.

It is quite evident that the
NCAA threat of major sanctions
Against the KU program over the
Lay 3 years has destroyed
Our recruiting !!
Going to be a long trip back!!!