Enough with the fuss about Baylor not playing enough Big 12 games; let it play out & see what happens 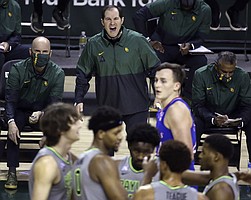 According to a report from CBS Sports’ Matt Norlander, the Big 12 is in the process of canceling/rescheduling Thursday night’s Baylor-West Virginia game as part of a bigger puzzle to make as many pieces as possible fit by the end of next week.

It’s no easy task. And the fact that Baylor will catch a break by not having to play all 18 games of its Big 12 schedule has Kansas fans more than a little fired up.

They’re fired up because of the past notion held by fans at other Big 12 schools that the Big 12 always caters to Kansas but appears to be doing that for Baylor this time. Their words, not mine.

They’re fired up because some of them — not Kansas coach Bill Self — believe that Baylor could still be chased down in the Big 12 race, leaving the door open for KU to still be alive for a Big 12 title. Again, their words, not mine.

And they’re fired up because, let’s face it, that’s what fans do: They get fired up in support of their team and like to take shots at others. While so much of what has gone on during the 2020-21 season has been new, this fact is not. Fans acting like fanatics is as old as time.

I’m not too worried about the first and third scenarios listed above. But it’s that second one that needs to be addressed, because anyone who thinks any team other than Baylor is going to win the league this season needs to take a deep breath and think again.

Yes, the Bears still have nine games to play. No, they’re not going to get to all of them. And I’ve already written about what will happen if/when the Bears finish the season having played just 15 or 16 games against Big 12 foes. It's all about phantom losses and adjusted winning percentage.

But let’s pretend for a minute that we live in some dream world where there’s still time for Baylor (and everyone else) to play all nine games remaining on its original schedule. Even then the numbers still favor the Bears as Big 12 champs.

These are the games, in no particular order, that Baylor still has to play. Again, they’re not going to play all nine of these, but these are the results that are missing:

As you can see, six of the nine are at home. Even if Baylor were to lose all three road games but then swept the home games, BU would finish with three losses. Oklahoma and West Virginia currently have four. Kansas has five. Baylor would be Big 12 champs.

OK. So you think unbeaten Baylor, which has looked as good as any team in America throughout the season, is suddenly going to start dropping games left and right? Could happen. Rust and the layoff and the stress of breaking a rhythm can do funny things to a program. I’ll give you that. So let’s say Baylor drops the three road games and also loses to Texas and West Virginia at home — the two highest-ranked teams remaining on its home slate. Again, not likely, but let’s say it happens for argument’s sake. Baylor would finish 13-5 and Oklahoma and/or West Virginia would have to run the table to win the league. The Sooners still have five games left, West Virginia still has six left, and neither team is going to play them all.

OU: 2 versus Oklahoma State, 1 versus Baylor, 1 versus K-State and 1 versus Texas. Only the K-State game is a gimme.

WVU: 2 versus Baylor, 2 versus TCU, 1 versus K-State and 1 versus Oklahoma State. Three of the six look like easy wins and the other three are much tougher.

We could do this with every team still in the hunt (Kansas and Texas have five losses and Oklahoma State has six), but the fact remains that none of it is going to matter.

Because COVID has wrecked the Big 12 schedules and there’s not a whole lot that can be done about it now. Things are not going to be equal. And for every Kansas fan who says that’s unfair because the Jayhawks made it through and did their part, there’s a West Virginia or a Baylor fan that can say that their team caught some bad luck and would’ve won more or lost less if not for COVID. No one can say definitively what would have happened. So we do the best we can with what we know and what has happened.

We all knew that the pandemic was going to play a role in this whole thing when the season began. So it should be no surprise now that that’s exactly what’s happening now.

Baylor is most likely going to play five more games before the end of the regular season. That’ll put them at 14 total conference games. As I mentioned above, I wrote last week about what the league plans to do in the event that the final standings are unbalanced.

Almost every scenario, short of Baylor losing every one of the games it plays, has the Bears winning the conference.

Accept it. Deal with it. And get ready for March. Because, like most years — as Kansas fans know all too well — that’s all that truly matters anyway.

The Big 12 Conference this afternoon announced the complete schedule for next week, which was built into the schedule as an open week for make-up games.

The official word on why Thursday's Baylor-WVU game was canceled is as follows: "To avoid scheduling a team to play three games in successive weeks, the West Virginia at Baylor game scheduled for Thursday, Feb. 25 has been canceled."

Baylor now has three games scheduled next week. If the Bears are able to play those three and they get their game in tonight and Saturday versus Kansas, they'll get to the 14-game mark by the start of the postseason.

I think that it is a forgone conclusion that Baylor will win the league championship and the conf. tourney top seed no matter how you figure it. There are two ways to figure the standings of the other teams-- by winning percentage or games behind. Using the winning percentage favors the teams who played less games. Using games behind favors teams who have played more games. Do the math to check this out. If you're going to choose one or the other, it seems best to go with the teams that played the most games, not the least. But the league has already made that decision, favoring the teams that played less games. But at least I can feel better by airing my complaint even though it will have no influence on the league.

I have no doubt Baylor wins the Big 12 regular season but still would like to see how their record looks if they hadn't had games canceled with #1 Gonzaga, WV twice, Texas once, and some other ranked teams. I'm not questioning that they are very good. I'm questioning whether they are really undefeated-good. If not for cancellations there would be only one undefeated team at the top of the polls, either Baylor or Gonzaga.

It would be wonderful (and honestly unexpected) if KU wins out. Nevertheless, it would be fun to see if the Big 12 would require Baylor to win at least 14 Big 12 games (4 games plus a win against ISU which is a gimme) or one more than KU (assuming KU has the most regular season wins) to claim the regular season championship. This speculations will be all for naught if KU continues to struggle scoring. To win the next two, KU has to outscore Texas and Baylor. Based on their offensive struggles for a long while, one should not holding their collective breaths. Rock Chalk. Make it interesting.

Most complaints come from people who wanted a National Championship banner last year.

It’s a rough year. You elect the dumbest person in every room he enters to handle a pandemic? You get bad results everywhere. For over a year.

Some would rather lament their woeful status than embrace facts.

And now would be a good time to level that abomination on Naismith.

From ESPN's site on why Thursday's Baylor-WVU game was canceled is as follows: "To keep the Bears from having six games in two weeks". KU played six games in two weeks: @TN, K State, @ WV, OK State, IA State and @ IA State. Baylor is the best team in the Big 12 but they only have to play the number # 2 team in the league once. Saturday KU will get a chance to see if they are playing better as a team against the #1 Team in the Big12. Hopefully Baylor will still be rusty, having only played one game in 25 days. The Big 12 needs to make all teams play all of the games they have scheduled against the top half of the conference.