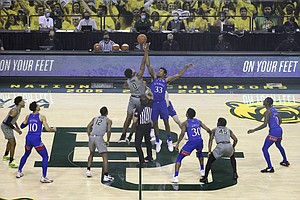 Baylor forward Flo Thamba (0) and Kansas forward David McCormack (33) reach for the tip off in the first half of an NCAA college basketball game, Monday, Jan. 18, 2021, in Waco, Texas. (AP Photo/Jerry Larson) by Associated Press

The current standings show Kansas just two games back of Baylor in the race for the 2020-21 Big 12 men’s basketball title.

Not bad for a team with five conference losses that is chasing a team that has none.

Ah, COVID. When will you run out of ways to blow our minds?

Two games back with three to play — with one of them coming against the team you’re chasing — certainly would be an interesting position to be in most years.

But this year, the 23rd-ranked Jayhawks remain an extreme longshot in the Big 12 race (along with everyone else) simply because all Baylor has to do to gain some separation is play games, whether they win them or not.

In fact, if my math checks out, the Bears (currently 9-0 in Big 12 play) need just three more wins to lock up the Big 12 title, even if that means going 3-2 or 3-3 to close out the regular season. More on that a little farther down.

Stuck in a prolonged pandemic-related pause, the Bears are slated to return to action against Iowa State next Tuesday. After that, they have games scheduled for Thursday (vs. West Virginia) and Saturday, as well.

That last one’s in Lawrence. And depending on what Kansas does against Texas Tech and Texas before then, KU's regular season finale could get a lot more interesting in a hurry.

No one should hold onto the pipe dream of Kansas catching Baylor for the Big 12 title. That ship sailed weeks ago.

But given the fact that the Bears still could be a little rusty after their three-week layoff and will be playing their third game in five days, the Jayhawks, who are still battling for postseason seeding, could be catching the nation’s No. 2-ranked team at a good time.

Time will tell on that.

For now, let’s get back to Baylor and what its next couple of weeks might look like.

During their recent down time, the Bears were forced to reschedule five games. That’s on top of two Big 12 games that were already postponed earlier in the season and the two other games that are still on their original schedule, Feb. 27 at Kansas included.

Unless the Big 12 wants to throw in a couple of back-to-back adventures like the NBA, it’s impossible to see Baylor playing a full 18-game Big 12 schedule.

So that’s not happening. The number the Bears should shoot for is 15.

That would mean three games next week and three games the following week, which was purposely left open as a rescheduling option for this very reason.

Any more than six games in the final two weeks seems outrageous and awfully tough to pull off when you consider travel and scheduling logistics.

Heck, at this point, if BU does wind up playing six games in a 12- or 13-day span to close the regular season, it probably would be better off losing in the quarterfinals of the Big 12 tournament to grab a little extra rest. The Bears are not going to need to do anything in Kansas City, Mo., to justify their 1 seed in the Big Dance.

Don’t bet on that happening either, though. After all of this time off, these guys surely want to play, and they’ll get some decent rest before the Big 12 tourney begins and again before the NCAA Tournament tips off.

Where it gets a little more interesting is if Baylor, for some reason, cannot play five or six games in the next two weeks.

The Big 12 is prepared for that and has come up with a process to determine the Big 12 regular season champion based on adjusted winning percentage.

• The league will take the average number of conference games played by its 10 men’s basketball programs and that number will serve as a baseline of sorts.

• Let’s say Baylor plays six more games and finishes with a 15-game record. That would mean the total number of Big 12 games played this season in men’s basketball was 174. Divide that by 10 and you get 17.4, which would be rounded down to 17 as the average number of games played per team.

• At that point, any team that plays a total number of games that is greater than three games shy of 17 (so 13 or fewer) would have a phantom loss added to its record for the purpose of setting an adjusted winning percentage to determine the league champ.

• Those losses would not be actual forfeits on the team’s historical record. They would just be used to set an adjusted winning percentage.

As you can see, Baylor already has done plenty to position itself extremely well to finish off this season with a Big 12 regular season title.

But here’s a funny one to end on: Let’s say for one reason or another that the Bears do not play another game and they finish the regular season at 9-0 in conference play.

That would lower the average number of Big 12 games played this season from 17 down to 16 and give Baylor a final adjusted winning percentage of .692 based on a phantom record of 9-4.

If either Oklahoma, Texas, West Virginia, Kansas or Texas Tech could somehow finish at 13-5, they would be crowned the Big 12’s regular season champ with a .722 winning percentage, but Baylor, at 9-0 in real life, would still be the No. 1 seed at the Big 12 tournament in Kansas City, Mo.

That outcome is highly unlikely because it looks like the Bears are going to get enough games in to both qualify for the regular season title and earn the 1 seed.

But if playing and covering sports in this pandemic has taught us anything, it’s that you can’t really take anything for granted.

Kansas coach Bill Self on final stretch: "I want to see us play our best ball" by KUsports.com

KU's David McCormack on what he's expecting in rematch with Texas Tech by KUsports.com

Thanks for breaking this down for us, Matt.

Phantom games and losses seem so sadly appropriate this year.

Glad you figured this out and wrote the article even before I commented in the other article.

No doubt. I thought that timing was pretty fun when I saw your other comment. It's set up for a potentially crazy scenario, but I'm guessing Baylor will leave no doubts about who the league champ was/should be this season.

Thanks Matt. If your last scenario did come true and KU was somehow crowned the conference champion, do you think there's a Jayhawk fan on the planet who would consider that a real title? I sure as hell hope that doesn't happen, because I can't imagine anything that would be more tainted.

Baylor's title after ducking a third of their league games will be tainted as well, IMO, despite the fact they are obviously the best team.

Baylor is “obviously” the best team because they’ve missed virtually every challenge this year; conference and non-conference. Coach Snyder is envious of how they’ve pulled this off.

I agree, as I said in comments elsewhere on this site: Baylor has established an entirely unfair advantage for themselves this year. KU, for example, would obviously have a much better win/loss percentage if we had just decided to skip our second games against OU and WVU, and opt out of our trip to UT next week in order to rest up and prep for the final game against Baylor at home.