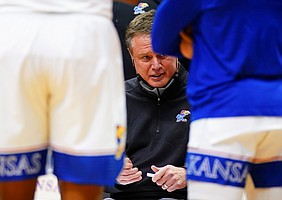 Kansas head coach Bill Self huddles up with his players during the second half on Thursday, Feb. 11, 2021 at Allen Fieldhouse. by Nick Krug

For the third time this week, the NCAA’s case against the Kansas men’s basketball program was a hot a topic during an interview featuring KU coach Bill Self.

On Tuesday’s episode of the ESPN.com podcast "Courtside with Dakich and Greenberg," Self was asked by Dan Dakich if he had ever thought about resigning as a result of the NCAA’s infractions case against the Kansas program.

“Hell no,” Self said emphatically. “That's exactly the image and portrayal that's been presented to people. I'm saying we haven't done anything wrong. Why would I run from this? I mean, I'm not running from this at all.

“(Quitting has) not even (been) a thought process,” Self added. “Not one time. And I will not believe that or think that ever.”

That stance is nothing new, but rarely has Self been asked about stepping away. Self used the opportunity as an chance to reemphasize his commitment to KU.

“My resolve now is as strong now as it ever has been,” Self told Dakich and Seth Greenberg. “And I'm as excited about the future as I ever have been. We just have to get through this.”

Earlier in the week, on a podcast with Jeff Goodman and also during his regular weekly press conference, Self discussed the ongoing NCAA case’s impact on recruiting.

On Tuesday, he addressed the impact the entire process has had on him personally.

Self joined the podcast at the 28-minute mark and began talking about the investigation at the 45-minute mark.

Today on #Courtside, @SethOnHoops & @dandakich discuss Jalen Johnson opting out at Duke, the win of the year, Drake downing the Ramblers and how the committee will evaluate teams.

Plus, why did @CoachBillSelf give Dan a hearty "HELL NO"? 👇

Coach Self should not step away from the KU program. There is no evidence that he did anything wrong. The man has always been a straight shooter and has always complied with NCAA rules and rulings, however ridiculous and hypocritical they may be, for as long as he has been at Kansas, as well as during his days at Oral Roberts, Tulsa, and Illinois.

Dan Dakich is an A-hole- no judgement intended.

If Self continues to lie at this rate, he may turn Orange.

He’s an embarrassment and should just shut up.

I still have trouble keeping Bryce versus Brett straight… :-)

Please Brett
Show us the evidence.
Bill Self has done nothing until someone proves it.
The Shoe companies are out of control and everybody knows it, and everybody should fix it,
but the answer is not to punish KU, for lack of NCAA oversight of the shoe companies.

It's ridiculous for anyone to suggest Bill Self steps down as KU's head coach.If the NCAA loses in the SCOTUS on March 31, Bill Self will be the perfect HC for Kansas....he'd be perfect anyway.
https://www.supremecourt.gov/qp/20-00...