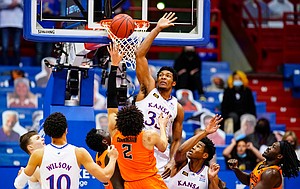 Kansas forward David McCormack (33) elevates to defend against a shot from Oklahoma State guard Cade Cunningham (2) during the second half on Monday, Feb. 8, 2021 at Allen Fieldhouse. by Nick Krug

While the Kansas basketball team’s current three-game winning streak was absolutely essential for the Jayhawks to get their confidence back, it also opened the door to a key component of KU’s postseason prospects.

Had the Jayahwks continued to struggle like they did in January, it would have been awfully tough for anyone touting KU’s overall résumé to look back at what this team did in December as worthy of being the primary component of Bill Self’s team’s postseason seeding.

Today, however, that narrative looks a little different. Just like the Jayhawks.

No one is claiming that back-to-back wins over Iowa State and a home victory over now-unranked Oklahoma State are enough to suddenly vault the Jayhawks into the conversation for a 3 or 4 seed today.

But the fact that those recent victories helped this team rediscover some of the elements that made them a Top 10 team in December makes it a lot easier to look back at those wins with a little more weight.

• A Dec. 8 victory over Creighton. The Bluejays have turned in the kind of season most people expected them to have and have maintained their status as a Top 20 team all season long. Currently ranked 16-5 and 12-4 in the Big East, Creighton is fresh off of a 16-point victory over No. 5 Villanova. Any way you slice it, beating this team, now or in December, qualifies as a good win.

• A Dec. 17 road win at Texas Tech. Like Creighton, the Red Raiders have spent most of the season in the Top 20, and, as recently as last week, were ranked No. 7 in the nation. Tech’s 11-point home loss to West Virginia last week (you might remember it as the Chris Beard ejection game) dropped Tech to No. 15 in this week’s poll, and the Red Raiders are, without question, a tournament team and one of the toughest teams in the Big 12. KU will get a shot at validating that December win when Tech comes to Lawrence on Saturday. If the Jayhawks can pull off the season sweep, both wins will bolster their NCAA Tournament resume.

• A Dec. 22 home win over West Virginia. The Mountaineers are currently 14-6 and ranked No. 13 in the country. Like KU, they, too, do not have a single bad loss on their resume, with all six WVU losses coming to teams ranked in the Top 28 of the current KenPom.com rankings. Any team that tops them can count it as a quality win, and, it will be really interesting to see what the selection committee does with the teams who finish behind Baylor in the Big 12 standings. On one hand, they all may be battling each other for spots on the 3-4-5 lines. On the other hand, there’s a chance that all of them could wind up on the same line but in different regions.

• A Jan. 9 home win over Oklahoma. The Sooners are currently the second-highest ranked team in the Big 12 and they’ve been on an absolute tear (7-1, with four wins over ranked teams) since losing to Kansas at Allen Fieldhouse in a game they had a chance to win. Nobody thought much of that victory at the time, but it may wind up going down as one of KU’s best of the season. And, if the Sooners stay hot — they’re currently ranked No. 9 at 13-5 — that KU win in early January will go down as much more than a nice, little Quadrant 1 victory.

Those victories, to date, are KU’s only four Quadrant 1 wins. But before you scoff and view that number as teenie tiny, consider that only eight teams in the country (Gonzaga, Baylor, Illinois, Ohio State, Alabama, West Virginia, Oklahoma and Missouri) have more Quadrant 1 wins at this point in the season.

Beyond that, Kansas has played six games against that group, which illustrates how tough this team’s schedule has been. The NET rankings have it as the 11th hardest schedule in the country, and KenPom.com puts it at No. 17. Back-to-back games against Iowa State (No. 148) knocked it out of the Top 10 on that site.

Tough schedules are great and can give a team a significant boost in the rankings or seedings if the road is viewed as impressive enough by those filling out their ballots or the bracket.

But, at some point, teams have to prove that they can do more than just play good teams. They also have to beat them.

The Jayhawks were doing that earlier this season and then the wheels fell off a little bit. Now that this team’s confidence has been restored and Kansas seems to have found its identity — win with defense and let the offense come naturally — the Jayhawks have put themselves in position to do just that.

Whether they do, or how often, could go a long way in determining where they’re seeded and what kind of a threat they’re viewed as in March.

But, as of now, that’s at least worth discussing again, and it’s not hard to see how KU quickly could get into the conversation as a potential 3 or 4 seed.

They’ll have to win to get there. But this group appears to be more prepared to do that today than at any time this calendar year.

Kansas coach Bill Self speaks to media ahead of rematch with Kansas State by KUsports.com

Ochai Agbaji on Jayhawks being back in AP Top 25 after undefeated week by KUsports.com

2] The reality of this team is that if they get to the Sweet Sixteen, it will be one of Coach Self's greatest coaching feats.

3] The absolute best they can hope for is a low fourth seed......no easy task with TT, Texas, Baylor and probably one or two of them again as well as possibly Oklahoma or West Virginia later in the Big 12 Tourney.

Wasn't intending to be half-full here. I merely wanted to point out that their play of late has made those early wins/resume builders worth counting again. For the entire month of January, it was hard to say that those wins meant much because the team, as they were performing at the time, was struggling so much.

We still don't know exactly who or what this team is. But, at least as of today, they appear to be better off than they were 2-3 weeks ago.

Gotta prove it the rest of the way. And it seems like something they're looking forward to trying to do.

Thanks for the article Matt. I'm concluding my 69th Jayhawk basketball season. There's been a lot of ups and downs during these years. Looking at a "glass half full" has always been better than looking at a "half empty" glass. It gives me a chuckle when I read so many of our fans' negative reactions when everything doesn't go the way they think it should. In 125 seasons we have much to be proud of. Many records have been set by our Jayhawks, including the recently set of 231 consecutive weeks of being the top 25 of the AP poll. Sure, I hated to see it end. But it's a record that will probably stand for a long time. Let's be proud of it! Who knows, our Hawks may be the ones to break it. It's probably doubtful that I'll be around to see that, but who knows . . . In the meantime, I'm going to continue to support my Jayhawks and enjoy doing it. Here's hoping to a wild finish for this season!

Enjoy the rest of the season, Garry. This much I can almost guarantee you: It will be wild... One way or the other!

This is the type of team that can lose to almost anyone in the country if terribly ‘off’ on a particular day and beat the best of the best if ‘on’.

Well said. I definitely agree with that.

Depending on the personnel and match-ups, of course, I just don't think there are a ton of teams out there that this team will be "scared of" come March.

That doesn't mean much when it comes to projecting how they'll finish and how far they can go. But I'm sure it means something to them.

Should be interesting to watch it all play out.

Matt, One other aspect to the "half-full" perspective .. the "freshman (red-shirt) slump" of Jalen Wilson ... and the injury to Bryce Thompson ... and with David McCormack playing "rushed" instead of just slowing down .. those 3 all had an impact on the overall teams "January slump" .. so will be interesting to see what the rest of February and March brings.

Good points. Even though their recent play has made a lot of believe they're back (or closer) to looking like the team they were in December, it's possible, because of the things you mentioned, that they actually could be ahead of that. Possible. Not guaranteed. And not necessarily here to stay if true.

All that matters now is how they perform the rest of the way, and they'll get a great opportunity in the final three games of the regular season to show who they are.

Matt, Always enjoy your insights.
I'm sure you've taken note of the ranking of Houston and the play of Quentin Grimes. I think he's averaging about 16+ pts and 6+ boards this year. Can you refresh me (or speculate if appropriate) about the real reason for his transfer. I had heard he wanted to play point, but he's not a point guard past, present, or future. Could have used him this year, though. Thanks

Thanks, Nick. The opportunity to be more of a play-maker, with the ball in his hands more, was certainly a big part of it and he wasn't going to get that at KU as long as Dotson was here.

I think there was still some thought that he might only play one more year of college (last season) so Dotson's decision to return to KU for his sophomore season made Grimes' role as a secondary ball handler/creator at best an instant reality.

I think a fresh start also had something to do with it. Sometimes kids don't fit the program and sometimes the program doesn't fit the kids. It happens.

He clearly found a good landing spot, and while I hear you about him potentially helping KU this year, he would've had to make it through last year to get to that point, and I think that would've been tough.

All's well that ends well, I suppose. Would be fun to see KU and Houston meet up in the tourney.