Everyone's got a good Roy Williams story or two; here are a few of my personal favorites 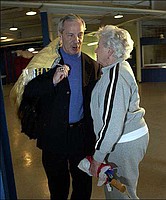 Just about everyone I know who grew up or spent time in Lawrence in the 1990s has a good Roy Williams story.

The man, who announced his retirement from coaching on Thursday after 33 incredible seasons, was too genuine of a person and too interested in the lifting up others to not leave some kind of impact on people after meeting them, be it briefly or for prolonged periods of time.

Many have stories of one-liners, a wink and a smile or an enjoyable conversation in an autograph line.

His golfing buddies have stories that can’t be printed here.

And the players who played for him at Kansas — and North Carolina, I’m sure —will tell you about his passion, drive, tenacity and influence.

Each story, though resting under the same umbrella, is slightly different and unique to the person telling it.

Here are a couple of my personal favorites from a good-sized list of encounters with the future Hall of Famer, which included knowing him in his early days with the Jayhawks, covering him as a student at KU and keeping up with him here and there while he was at Carolina.

My most recent conversation with Williams came at the outset of the pandemic, when I wrote something about him using former UNC star Michael Jordan in a recruiting video after he arrived at Kansas.

I asked for 10-15 minutes and we were on the phone for 35. Only half of our conversation was about Jordan and that video.

Shortly after I joined the Journal-World, back in 2008, I wrote a story about three grandsons of three members of KU’s 1952 national championship team who were playing basketball at Free State High.

A couple of weeks after the story ran, I received a letter from Williams, on North Carolina letterhead, thanking me for writing the story and expressing what those three men — Charlie Hoag, Bill Hougland and Bill Lienhard — meant to him, both while he lived in Lawrence and still to this day.

He signed the letter in Carolina blue ink and it’s framed in my house.

Growing up in Lawrence as I did, I knew Williams in a slightly different way than a lot of other people. Sure, he was the head basketball coach at Kansas. And that was and forever will be a big part of his identity. But he was also my buddy Scott’s dad.

Scott was a year older than me in school and he played on the 1995 LHS basketball team that won state. I’ll never forget seeing Williams snag Scott for a quick hug and high five on the court while celebrating the state title game victory in Emporia with the rest of the LHS players and dozens of classmates.

As Williams left the crowded court and headed for the exits, he walked past me, said hello and gave me a wink and a handshake that said, “We did it.”

I didn’t do anything, of course. But I was always loud in my support of my friends on the floor.

During the brief exchanged, I looked at him and said, “Your turn.”

He smiled and said something to the effect of, “That’s the plan.”

Williams never got that elusive national title during his 15 seasons in Lawrence. But he pretty much did everything else. Four Final Fours. Two national title game appearances. More than 400 victories. Individual coaching honors. Blue-chip signings. Players sent to the NBA. And hundreds of Ol’ Roy stories that could fill a good book.

One of the best, at least in my chapter, came when we were in college and Scott, who played for Dean Smith at UNC as a walk-on, was back for the summer.

By this time, many of us had learned about college life and parties and all of the things associated with that, so when Scotty called and asked if we wanted to put together a home run derby at YSI for old time’s sake, we all declined.

Scott understood but he didn’t give up. Twenty or 30 minutes later he called back and asked again. For the second time, we said thanks but no thanks and suggested that he come over to our apartment to hang out.

This time, however, he had an ace in his pocket.

“Pops wants to pitch,” he said.

Like that, we changed our tune and headed out to the diamond to take another round of BP with Williams on the mound.

Most of my friends there that night had played baseball throughout junior high or high school, so they were taking his fastball over the fence with relative ease. I quit the game after sixth grade and wasn’t any good to begin with, so my swings were less memorable.

There was one, however, that I’ll never forget. A true chuck-and-duck rope up the middle that Williams had to quickly dive out of the way of to avoid getting hit.

I was extremely thankful he did. He may have been Scott’s dad to me, but to thousands of Kansas fans he was so much more. And if I had been the one to seriously injure him with my lousy baseball swing there’s no telling how different this story would be today.

A few rounds later, with me still looking for my first home run of the night, Williams really locked in and tried to groove a few pitches for me so I could pick the perfect one to hit.

It finally came. And I clobbered it. As the ball soared out to center field, we all watched, including Williams, hoping that I could finally join the club, which then would’ve led to the inevitable ribbing of, “about time, loser,” etc. But as the ball reached the chain link fence, it hit the horizontal pole at the top and softly fell back onto the warning track.

I was bummed, but not surprised. Williams doubled over in disappointment and then said he had done all he could do. No more swings for yours truly. No dingers either.

But that hardly mattered. The memorable stuff was in those moments, when the basketball coach at Kansas, who had so many bigger and better things to do — even in the summer — was locked in a high fly ball to center field hoping like heck that it would clear the fence.

In the hours, days, months and years ahead, you’ll read and hear dozens of stories about what a great man, coach and person Williams was during his remarkable 33-year coaching career at Kansas and North Carolina.

There will be games I’ll always remember, interviews I’ll never forget and emotion that was unmatched by almost anyone in the game.

But right there with all of it will be the night I tried to take Williams yard.

Great story, Matt. I’m glad that Scott pulled out the ace in the hole to dislodge you guys from your couch porch!

Mine was cornering Roy in the kitchen at a holiday party at a AD staff member's home, and goading him relentlessly to eat Swedish meatballs. "Come on Roy, one more! Do it! One more- you can do it! More- they're meatballs!" - he was so good-natured about it even though he had no idea what was going on... classic!

Roy Williams is so dad-gummed nice that it is impossible not to like him. Enjoy your retirement, Coach!

My two favorites (in no particular order):
1. Sharing a hymnal with Roy at the Methodist church
2. Stank-em the monkey

My previous post should be read with some humor--I try anyway. I do want to also second another poster in that this was a good article. Second, I did work in the athletics tutoring center for a few years as a grad student and came away super impressed with how Roy instilled the importance of academics into the program. Sometimes it is easy to get cynical with the concept of student-athlete at the high levels, but I came away with much respect with how academics was addressed under Roy's leadership.