Jayhawks off and running with KU basketball boot camp 2020 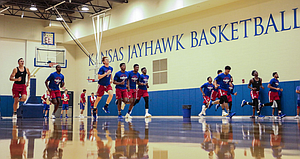 Monday, Sept. 17, 2018, was a feet-shuffling, legs-turning, lungs-working-overtime kind of morning for the members of the Kansas basketball program, who kicked off another year of Bill Self boot camp at 6 a.m., at the Jayhawks’ practice gym. by Photo courtesy of Kansas Athletics

With the NCAA recently granting a transitional period of up to 12 hours a week of player-coach interaction through Oct. 13, the Jayhawks have more time to get more done ahead of the first official practice of the 2020-21 season.

Included within that 12 hours is the requirement of skill instruction being limited to eight hours a week (the other four are allowed in the weight room) and student-athletes getting a minimum of two days off each week, as well.

In a phone interview with the Journal-World on Sunday night, KU coach Bill Self outlined how his plans for boot camp would fit into those windows.

“It’s pretty much standard,” Self said. “The thing about it is, we’re starting it when we get eight hours on the court instead of just four. So, if we wanted to, we could make boot camp have a ball and we could actually do basketball stuff during boot camp. So that’s kind of different.”

As of Sunday, Self’s plan was to divide up the workouts throughout the next couple of weeks.

Traditionally speaking, KU’s boot camp has always been about conditioning anyway. The boot camp sessions always have been run without basketballs, with most of the drills designed to put the players in basketball situations, such as full-court sprints, defensive slides and rebounding drills.

For the next 7-10 days, Self and his coaching staff will push this year’s Jayhawks like some of them have never been pushed before. So much of the experience emphasizes mental toughness. And, in the past, flawless execution occasionally has led to shorter sessions.

“We’re not in good enough shape to practice,” Self said Sunday. “Not close. But we will be in 10 days or so. But right now we’re not. Depending on how they do, I think we’ll probably end up going seven or eight workout days.”

Self said part of his desire to keep this year’s boot camp short and sweet was because the team still has plenty of time before the start of practice and the season opener, the date of which remains unknown other than the fact that it will not come before Nov. 25.

“It’s a longer season now,” Self noted. “We don’t start until (November) 25th and we can actually practice more than we have been practicing, so I just don’t feel the need to try to crush them.”