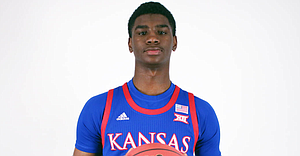 Class of 2020 guard Tyon Grant-Foster, who joined the Kansas men's basketball program after two seasons at Indian Hills Community College in Iowa, will wear jersey No. 1 for Kansas during the 2020-21 season. by Photo courtesy of Kansas Athletics

During a player-by-player rundown of the current Kansas basketball roster on the second episode of the online series “Grill with Bill,” Kansas coach Bill Self revealed that junior college transfer Tyon Grant-Foster has been dealing with a minor injury of late.

“Tyon has had the hardest first month of anybody,” Self said during a conversation with assistant coaches Jerrance Howard and Norm Roberts. “Just because he’s nicked up. He’s not healthy.”

Self told the Journal-World on Sunday night that Grant-Foster “was fine” and that he “just tweaked his ankle.”

It was clear from Self’s comments in the online video that the physical setback had not taken away Grant-Foster’s spirit and competitiveness.

“He’s trying out there,” Self said. “I love his attitude. But we’ve got to make sure we let him know that it’s OK. We’re not going to win any games in August or September.”

Projected to be a key part of the 2020-21 team, Grant-Foster’s biggest strengths are his versatility, athleticism and ability to score in a number of different ways.

“He’s shown great spurts,” Self said. “He shows flashes. (He’s just) got to get healthy.”