Lowering bowl requirements in 2020 a missed opportunity for college football 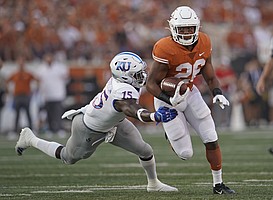 Texas's Keaontay Ingram (26) runs through a tackle of Kansas's Kyron Johnson (15) during the first half of an NCAA college football game in Austin, Texas, Saturday, Oct. 19, 2019. (AP Photo/Chuck Burton) by Associated Press

In a year when eliminating bowl games would be not only justifiable but also welcomed, the NCAA now sits on the brink of watering them down even further.

The NCAA’s Division I Football Oversight Committee on Thursday recommended waiving the requirements for bowl eligibility during the 2020 college football season.

Nothing will become official until the sport’s Division I Council, which meets in mid-October, approves the plan to eliminate the six-win threshold that typically is used to determine which teams play in a bowl game.

But the move is expected to pass, and if it becomes a reality, it could set up the potential for a bunch of three- and four-win teams to go bowling.

Heck, you could be looking at a winless team in a bowl game in 2020, provided that program can make enough of a case that selecting its squad will help television ratings and ticket sales.

Ugh. Talk about a missed opportunity.

I think we can all agree that there are too many bowl games these days. Following the 2019 season, a whopping 82 teams participated in 41 bowl games. That’s better than 60% of the Division I programs out there and that’s a far cry from the 50 teams that appeared in bowl games in 2000.

And while I understand that the recommendation is for the 2020 season only, it sure seems like the powers that be could have used the unfortunate circumstances surrounding the season to pull back a little instead of paving the way for programs to hoist bowl banners who won’t have earned them.

I have no idea yet what this might mean for the Kansas football program. But given the fact that the Jayhawks have not played in a bowl game in 12 years, I get the feeling that the coaches and administration would look long and hard at the opportunity to get into a bowl game by whatever means necessary if that’s on the table.

Think of the marketing possibilities there and what just saying you’ve been in a bowl game recently could do for recruiting.

Besides, bowl prep almost always means a couple of extra weeks of practice and KU certainly can use all the reps it can get right now as it attempts to climb back to relevance. Especially with the Jayhawks missing out on spring football this year.

But there’s just something a little tacky about a team like Kansas playing in a bowl game after a one- or two-win season. Is that really how anybody wants KU’s latest bowl drought to end?

We’re getting ahead of ourselves a little there. For all we know, KU could still win a few games this season, therein making this whole concept a little easier to stomach. I mean, if the Jayhawks somehow found a way to get to 4-6, they’d probably deserve a bowl berth at that point.

But let’s be real. The Jayhawks haven’t won more than three games in a season or more than one game in Big 12 play in more than a decade. And that’s with two extra cracks at it each year compared to the 10 games they’ll (likely/maybe/hopefully) get this year.

Bowl games aren’t what they used to be, even if they remain one of the biggest markers of success at most schools from year to year.

Attendance is down, ratings are down, players with promising NFL futures are starting to sit them out and there just isn’t enough juice associated with the games anymore.

Pulling back and limiting the number of teams playing in a bowl game this year could have been the start of the climb back to the days where qualifying for a bowl game was something special.

Instead, it appears we’re headed for more of the same from the ho-hum postseason exhibition games, only this time a whole bunch of them will feature asterisks in the history books, too.

Now that all those other conferences have decided to play after all, do you really expect to see many 3 or 4 game winners bowling? I understand there will need to be bowl eligibility changes but my guess (and that's all it is) is that it won't be open to all, it will be set at 50% wins minimum with the only exceptions being if there are not enough eligible teams to go around. Or maybe the major bowls will use the 50% threshold and the others will be more open.

You've got a good point there. My main take here was that there are too many bowls and this was a golden opportunity to pare that down.

I could still see them allowing a 2 win SEC team in because after all they play in the mighty SEC. I would like to go back to the days of winning on the field meant something. Don't weigh games based on conference or Power 5. Too many teams get better bowl games with mediocre records because they played in a Power 5 conference. But a lot of those conference games are watered down because they created super conferences where everybody can't play everyone else. There should be 8-10 team limited on a conference so all the teams can play each other in football and they could all play home and away in basketball. Why do you need a conference with close to 20 teams in it? Just my opinion and in the words of the immortal Dennis Miller "I could be wrong."