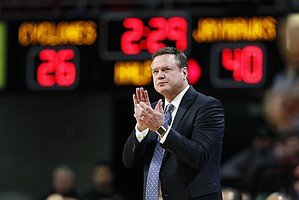 Kansas coach Bill Self applauds his team during the first half of an NCAA college basketball game against Iowa State, Wednesday, Jan. 8, 2020, in Ames, Iowa. (AP Photo/Charlie Neibergall) by Associated Press

It’s been a little more than six weeks since the Kansas men’s basketball team first reported to campus after four months away because of the COVID-19 pandemic, and head coach Bill Self has liked what he’s seen during that time.

“I could not be more impressed, at this early stage, at how mature they are,” Self said of his team during a recent episode of “Grill with Bill,” a new online video series put together by Kansas Athletics.

That comment came during a dinner conversation at his house with assistant coaches Jerrance Howard and Norm Roberts, and the three coaches reflected on what it was like to get back to work with their team after so much uncertainty and time away surrounding the pandemic.

Self marveled at the roster’s camaraderie and how excited the Jayhawks were to be back together and to get back to work. And Howard has not at all been shy about sharing similar feelings of his own on his social media channels.

“I think you’re right, coach,” Howard noted. “They missed each other.”

“And didn’t you miss them,” Self added.

Self emphasized his appreciation for the way his players have handled the pandemic during Thursday night's virtual production of the 13th annual Coaches vs. Cancer Kansas City Tipoff event.

"I can tell you this, my guys have been 10s — attitudes, everything," Self said during the 15-minute Q&A portion of the event with ESPN's Holly Rowe. "We are limited on what we’ve done. You can just see there’s a chemistry and camaraderie that we usually have, but maybe now more so than most years. I actually feel good where we are relationship-wise. That doesn’t guarantee you making a shot or getting a big stop, but I'm real excited to coach this particular group of kids."

If given the choice, there’s no doubt that the Kansas players and coaches would have chosen to follow the normal timeline of reporting to campus in June after a short break following the spring semester, so they could spend their summer taking classes, working out and playing pick-up games together.

Instead, the work they did was done largely on their own and often in strange settings, a far cry away from the elite facilities they get to work with at KU.

Self appears to be curious about what kind of impact that extended break and time away might have on the team and the upcoming season.

“I wonder if the attitudes are great because we haven’t seen them all summer,” he asked. “I mean, because if they’d have been here all summer (at any program), you know you start wearing on each other and all that stuff. I wonder if our performance will be better late in the season because we’ll be fresher because we weren’t here this summer.”

Time will tell if that preseason premonition proves true, but Self seems plenty pleased by the way his players have handled the strange offseason and the timeline the Jayhawks followed throughout the summer.

“I think it was actually smart, looking back, not to bring them in too early,” Self said. “… I think we would’ve been pushing it to have them here longer than what we did.”

While mid-March through mid-September was anything but normal for the Jayhawks and what they’re used to, things may start to seem a little more familiar in the coming days, when the Jayhawks are expected to kick off boot camp 2020.