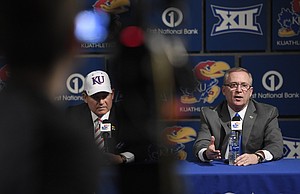 Putting a consistently competitive product on the field continues to be the preferred scale of progress for the University of Kansas football program.

And while that means week-to-week improvement in the eyes of head coach Les Miles, his bosses are looking at it from a slightly larger perspective.

“We need to see improvement and see development and see our program moving forward,” KU Athletic Director Jeff Long told the Journal-World when asked this summer, before the season began, how he would evaluate KU’s second season under Miles. “I think most people in football who watch the games intently will say that we improved last year. We competed more and were in many more games than we maybe have been in the past.”

One game into 2020, and with a bye week already behind them, the Jayhawks are off to a slow start.

With nothing but Big 12 games remaining on the schedule and KU almost certain to play as an underdog in its nine remaining games, it’s impossible to envision KU surpassing or even matching last year’s win total. So that will not be the focus.

However, even with his team falling to Coastal Carolina in its season opener two weeks ago, Miles has not abandoned the idea of judging his team’s growth this season by the final scores of KU’s 10 games.

“We want to continue to improve,” Miles said during Monday’s video news conference ahead of Saturday’s Big 12 opener at Baylor. “We want to take the team that we have now and make them better. But I don’t know that I’ve set any markers for improvement. I can tell you that we want to win. And I can tell you that this team will play hard and work to win.”

In order to do that, the Jayhawks have to perform better. Miles knows that. And on Monday he pointed to his team’s need to become more aggressive and more physical. Progress in both areas is tied directly to mindset.

But improvement, by Kansas standards, is not limited to KU committing fewer penalties from one week to the next or delivering better first-half production on offense. It’s also about the big picture. Success in the first area often naturally leads to success in the second. But none of it is automatic in Lawrence.

Few people associated with the program feel that more than Long, who said the Year 2 evaluation would be rooted in improvement but that improvement did not necessarily mean increasing the team’s win total.

Steps forward for the long-suffering program continue to be tied to cultural changes, recruiting victories and momentum on and off the field.

And they still will be for the next couple of seasons, which is both good and bad news. Twenty of the 42 players listed on KU’s two-deep offensive and defensive depth chart this week are freshmen or sophomores. Thirteen of them are freshmen.

The positive there is those young guys Long spoke of are getting valuable experience. The negative is that they’re already better than a bunch of KU’s upperclassmen.

So grading this team, which is still very much a work in progress, has to be done with that in mind.

That’s where the development part comes into play. And if Miles and his coaching staff can pair strong player development with continued success on the recruiting trail, Kansas may have something.

The word “if” is the most important one in the previous sentence, and it’s still too early to predict how this stretch of Kansas football will play out.

Given all of the chaos created by the COVID-19 pandemic, it’s a tough year to effectively evaluate anything or anyone.

But Kansas is not alone in dealing with those issues. So expecting Miles and company to find a way to take a couple of steps forward is both fair and necessary for the betterment of the program as a whole.