Ailing Gary Woodland shoots second straight 74 to drop to 8-over at 2020 U.S. Open 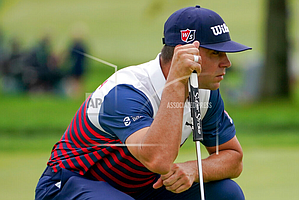 Gary Woodland, of the United States, lines up a putt on the first green during the first round of the US Open Golf Championship, Thursday, Sept. 17, 2020, in Mamaroneck, N.Y. (AP Photo/John Minchillo) by Matt Tait

Defending U.S. Open champion Gary Woodland followed up Thursday's 4-over 74 with another 74 on Friday to fall to 8-over for the tournament after two days.

Woodland finished Round 2 two shots off of the cut line and will not be around Winged Foot to defend his title in Rounds 3 and 4 this weekend.

The former KU All-American opened Friday's round with a double bogey and never got on track from there, recording five bogeys and three birdies the rest of the way.

Woodland started Friday's round on hole No. 10 and shot 39 on the first nine and an even-par 35 on the second nine.

In an interview with the Associated Press after his round, Woodland revealed that he has been dealing with a torn labrum in his left hip for the past several weeks.

“I’ve got a lot of pain in there, and I’ve been fighting through it,” Woodland told the AP. “But it gets to a point where you’re playing against the best players in the world. You just can’t play with pain. I’ve played with pain my whole life, but it’s getting a little tough.”

Woodland said Friday that he has had labrum issues for a while and always treated them with injections. Thursday was the first time he played 18 holes since the final round at Olympia Fields three weeks ago.

“My coaches didn’t want me to play today,” Woodland told the AP Friday. “But this meant a lot to me. My game was in a good spot. It would have been different if I wasn’t played well. But physically, I could do it. And it’s frustrating.”

Woodland said he may see a specialist on Monday.

“I’ve got to get healthy,” he noted. “Maybe I’ll call Brooks (Koepka). He’s dealing with the same (stuff). Maybe we can fix it together.”

After a strong return to play in June that included a pair of top-10 finishes, Woodland has not cracked the top 30 at an event since July and appears to be on his way to being cut for the second time in his last three tournaments.

The Topeka native entered the week ranked No. 26 in the Official World Golf Rankings.

Fellow former-Jayhawk Ryan Vermeer, who works as the PGA Director of Instruction at Happy Hollow Club in Omaha, Neb., shot an 8-over 78 during Thursday's opening round and a 7-over 77 on Friday and was also cut.

Patrick Reed (-4) takes a one-shot lead over Bryson DeChambeau (-3) into Saturday's third round.