Just 1 Jayhawk still standing in the NBA's bubble in Orlando 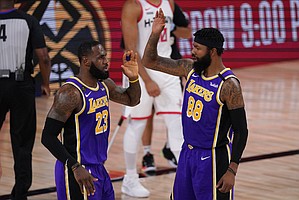 Nine former Jayhawks made their way into the NBA’s “bubble” in Orlando when the season resumed earlier this summer and just one is still standing.

With the NBA’s conference finals now set (Los Angeles Lakers vs. Denver in the West and Boston vs. Miami in the East), it’s up to Lakers forward Markieff Morris to bring a championship ring to Jayhawk Nation this season.

His brother, Marcus, was eliminated from the postseason on Tuesday night, when the third-seeded Denver Nuggets completed their improbable comeback from down three games to one in the series with the second-seeded Los Angeles Clippers.

That ended the dream scenario of an all-LA, Morris-twins-flavored Western Conference Finals, and we’ll never know what would’ve happened if these two had squared off against one another with a trip to the NBA Finals on the line.

As most Kansas fans know, there's some history connecting James' chase for the title and former Jayhawks. James won his first three rings with a Jayhawk on his roster — twice with Mario Chalmers in Miami and later with Sasha Kaun in Cleveland — and James made note of the connection during the parade in Cleveland a few years back, saying that Chalmers had sent him a text message pointing out KU's assistance.

As for the rest of the former KU players in the league, Frank Mason III and Milwaukee, along with Ben McLemore’s Houston Rockets were eliminated in Round 2 by the Miami Heat and Lakers, respectively, and Joel Embiid checked out in Round 1 after Philadelphia was swept by Boston.

Memphis’ Josh Jackson and Phoenix’s former Jayhawks, Cheick Diallo and the injured Kelly Oubre, creached the bubble but not the playoffs

And former KU point guard Jacque Vaughn, who led the Brooklyn Nets as the interim head coach in the bubble, saw his team knocked out to the Toronto Raptors in Round 1.

Here’s a quick look at how all eight former KU players fared in Orlando, starting with the one still standing.

Highlight: After falling to Houston in Game 1 of their second-round series, the Lakers bounced back with a win in Game 2, and Morris played a huge role. In just over 22 minutes, he hit 6 of 8 shots from the floor, including 4 of 5 from 3-point range, prompting Lakers star LeBron James to proclaim, “Kieff was spectacular off the bench, giving us that instant offense with his grit. We love having him on the floor. He was unbelievable for us in that second quarter.”

Next: Morris and the top-seeded Lakers will open their series with Denver at 8 p.m. Friday night.

Games played in the bubble: 20 (all starts)

Highlight: Scored in double figures in 9 of the 13 playoff games he played in, including a 19-point effort in the Clippers’ playoff-opening win over Dallas on Aug. 17. Made three or more 3-pointers in six playoff games for the Clippers.

Games played in the bubble: 11 (all starts)

Highlight: Scored 41 points and grabbed 21 rebounds, with three blocks, in Philly’s first game in the bubble. “The Process” also recorded a double-double in all four of Philadelphia’s playoff games, reaching the 30-point mark in three of them.

Highlight: McLemore’s best basketball in the bubble came before the postseason started. He reached double digits in scoring four times in eight games before the playoffs began, including a stretch of three games in a row. Once the Rockets reached the playoffs, however, McLemore’s minutes went down and he reached double figures in scoring just once, scoring 14 points in Houston’s Game 1 win over Oklahoma City in Round 1.

Games played in the bubble: 5

Highlight: Mason was with the top-seeded Bucks in the bubble for the duration of their playoff run, but found himself inactive for 10 of Milwaukee’s 18 games after the restart. In the five games he did play, he scored 48 points and dished 18 assists. His playoff usage was limited to 2:05 over two games and the only stat he recorded in that time was an assist in Milwaukee’s Game 1 loss to Orlando in Round 1.

Games played in the bubble: 4

Notable stats: Hit all six of his free throw attempts (over two games) during his time in the bubble.

Highlight: Had by far his best game of the bubble in the Grizzlies’ bubble debut on July 31, scoring 8 points and grabbing 6 rebounds and 2 assists in 13 minutes of a loss to Portland. Did not play in the winner-take-all play-in game that the Grizzlies lost later in the bubble to Portland, ending Memphis’ season and sending the Trailblazers to the playoffs.

Games played in the bubble: 3

Notable stats: Scored 8 points and grabbed 4 rebounds, with 1 steal and 2 turnovers, in just over 11 total minutes in the three games he played.

Highlight: Diallo was active for all eight of the Suns’ bubble games (all victories, by the way) but he played in just three of them. The former Jayhawk scored 6 points and hit 3 of 4 shots in 5:17 during Phoenix’s win over Dallas in the season finale.

Games played in the bubble: None

Highlight: Oubre was injured before the season was halted in mid-March and did not suit up in Orlando, even though he traveled with the Suns and got an up-close-and-personal view of their amazing run to close the regular season and come this close to grabbing a playoff berth.

Sorry to say I hope Kieff goes down this round. I could not stand to see LeBron running his mouth anymore.

agree, I am sick of King Nothing's politics. Leave it out of the NBA.